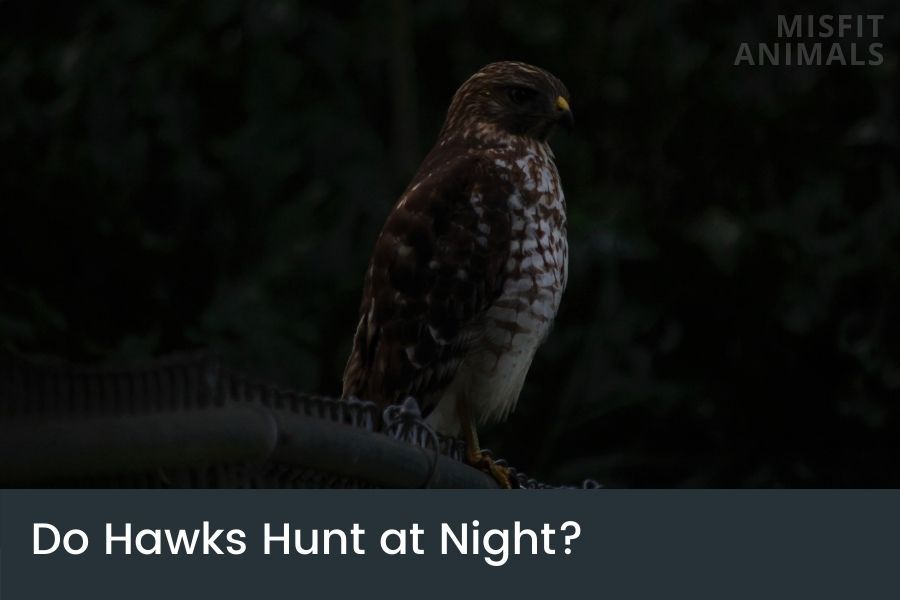 Hawks do not hunt at night. They’re primarily diurnal or crepuscular animals, hunting during the light of day or at dawn and dusk. As their vision isn’t fit for the dark, they need light to spot their prey.

Hawks are world-class hunters. They’re incredibly skilled at targeting, they can hit their prey with 120 mph, and have very sharp talons.

But are they nocturnal hunters? Or are do they hunt at day? And how have they developed this behavior?

This article will explore these questions, as well as the different theories on nocturnal hunting by hawks.

Do Hawks Hunt at Night?

No, hawks do not hunt at night, but during the day. They do not have the necessary components in their eyes to see well in darkness. As they can’t see in the dark, they wait for the sun before hunting.

There are two main reasons why hawks don’t hunt during the night:

Most hawks’ prey is diurnal, meaning they are active during the day. This means that most animals they hunt don’t come out until after the sun has come up, making it pointless for hawks to do so.

Additionally, hawks can’t see in the dark. Their eyes haven’t adapted to low-light settings, and would hence be flying blind.

Do Red-Tailed Hawks Hunt at Night?

Red-tailed hawks do not hunt at night. In fact, they don’t go hunting until it is light outside.

Several observations prove, that when red-tailed hawks set out to hunt, they do so in the day. They need the light to spot their prey.[1]

This helps them find prey that’s out in the open or hiding in tall grass. As hawks have some of the best vision in the world, they need to utilize it.

Red-tailed hawks don’t do well with low light conditions, such as at dawn or dusk.

When Do Hawks Hunt?

Hawks hunt during the day. They’re are most active during the early morning, after the sun has come out. As they are able to see better in the day, they wait for this time to come around.

Are Hawks Nocturnal or Diurnal?

Hawks are diurnal[2]. In other words, their main activities take place during the light of day.

For bird watchers, it means that if you want to see a hawk, you will need to go outside during the day.

If you would like to see a nocturnal animal such as a fox or owl, you will have better luck watching them at night.

The nighthawk inhabits most of North America. Most people believe that this animal has nocturnal tendencies, but that is incorrect. Its name is very misleading.

The nighthawk, contrary to its name, is actually not active at night. In fact, it is a bird of prey that spends most of the day perched motionless on trees and posts, waiting for its prey to come within striking distance.

Additionally, it’s not even a real hawk, but part of the nightjar family.

What Do Hawks Do at Night

Hawks sleep at night. While they are sleeping, they may still be aware of any dangers around them, though they do sleep in very tall trees to avoid any predators.

As hawks are diurnal, it means they’re inactive most nights. They sleep in their nests located in tall trees and will sleep close to the trunk, out of danger.

Hence, hawks roost at night, another word for when birds rest.

Why Do Hawks Scream at Night?

Some people believe that hawks scream, or screech, at night. If you hear a screech, there’s a good chance it’s not a hawk though.

As hawks rest during the night, they won’t make noise. There’s a good chance it’s another bird.

Most bird species don’t make noise during the nighttime hours. However, certain nocturnal birds are known to make high-pitched sounds, such as owls.

Hawks are commonly found in both urban and rural environments. If it is a hawk screeching, the reason is most likely an attempt at scaring off intruders or other threats. Sometimes people who live close to a hawk’s nest experience screaming at all hours of the night, while others may rarely hear these birds.

No, hawks can’t see at night. They rely on sunlight to see. While their retinas are dominated by rods, which work best in low light, they can’t see in the dark.

Hawks have eyes on the sides of their head, so they have a wide field of view and can spot prey distant in the distance.

Hawks cannot see as well (or at all) at night because they don’t have the necessary adaptations. During the day, hawks can spot small objects from far away but at night they can’t, as there’s not enough light.

Nocturnal animals have developed a reflective layer on their retina. This is called the tapetum lucidum. This layer is seen in both owls[3], foxes, and wolves, and enables them to see in the dark. Hawks don’t have this layer.

When the sun goes down, hawks’ vision weakens.

Where Do Hawks Stay at Night?

Hawks stay in their nest at night. Their nest is located in tall trees, which helps prevent attacks from nocturnal predators.

Every night, a hawk retires to a safe place where it will stay until the sun rises again. Hawks have several places that they can go, but they typically retire to their nest.

Hawks build nests in tall trees. The branches provide a good place for hawks where they can create their nests and hide, and they can easily fly away if they need to.

How do Hawks Hunt?

While some animals are solitary hunters, hawks are social hunters. Hawks hunt in pairs. They also kill their prey differently than most similar animals, using their talons and not their beaks.

These small birds of prey are extraordinary hunters. Some of their most impressive tools include their speed, talons, vision, and social hunting strategies.

Hawks use their sharp eyesight to watch for prey from a high-up position. Their vision is 4 to 5 times stronger and better than the sharpest human eye. They also have a wide field of view, which helps them spot prey or incoming predators.[4]

They also have sharp talons which they use to kill their prey. They swoop down, grab hold of the prey, and then fly back up to a high perch.

What Do Hawks Hunt?

Hawks hunt a wide variety of animals[5]. Their prey includes:

Hawks also swallow small stones to aid in digestion by grinding their food in the gizzard, a part of the bird’s digestive system between his stomach and intestines.

Are Hawks Dangerous to Humans & Pets?

Hawks are birds of prey, but they typically aren’t dangerous to humans. However, they can be dangerous to pets and small animals if the hawk is threatened.

Hawks don’t attack humans. Not unless they’re threatened. However, this is a different story for pets.

Small pets such as cats and rabbits can be at risk around a hawk, especially if they’re actively looking for food.

Hawks can carry about 4-5 pounds of weight, and still fly, so if your pet is smaller than this, it’s at risk.

Hawks are also known to attack small pets that are loose in their backyards, so it’s important to make sure your pet is secure. You can do this by using hawk deterrents or netting above the pet house.

How to Keep Your Pets Safe From Hawks

Are you concerned about your pet’s safety while outdoors?

Hawks are small to medium-sized birds of prey that hunt during the day. These creatures will eat almost anything – including rabbits, cats, and chickens. Your pet might be at risk if it is not leashed or harnessed while outside.

If you want to make sure your furry friend stays safe, follow these steps:

Natural Predators of the Hawk

The natural predators of the hawk are a wide range of creatures, including owls, eagles, vultures, and especially other hawks.

Owls are the most common natural enemy of hawks. They will prey on hawks during the night, attacking them when they least suspect it.

Eagles also eat hawks, not just when they’re grown but also when it is in their egg or newly hatched.

Vultures are also a common predator of the hawk because they often follow them in order to scavenge the dead prey after the noble raptor has killed it.

These creatures have been known to prey on the hawk and will often win the fight.

Hawks don’t hunt at night. They’re diurnal creatures, meaning they’re active and hunt during the day. Hawks have developed this activity pattern because they can’t see at night. Prey animals hunted by hawks are also not awake at night.