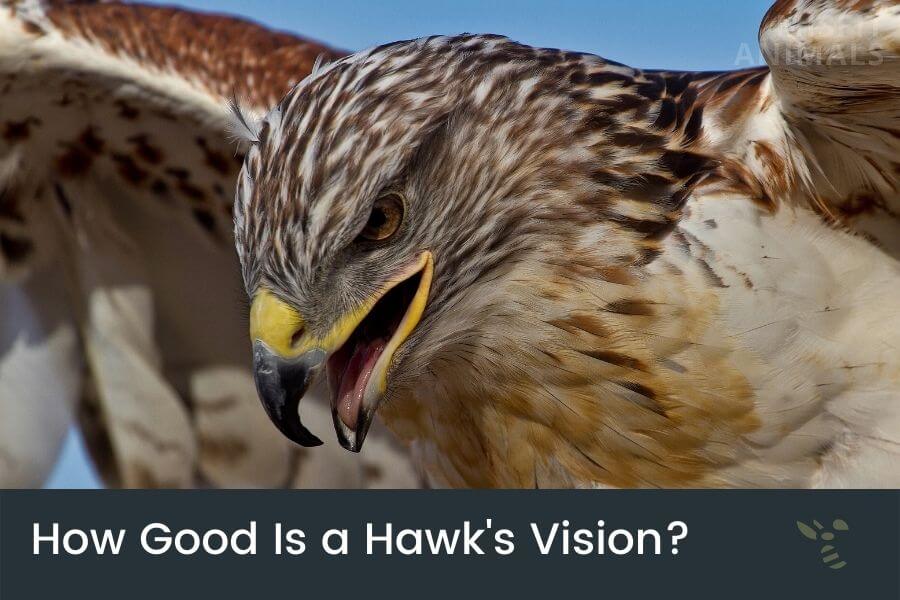 Hawks have the best vision in the animal kingdom. They can see medium-sized prey from a mile away, and they can see colors in the ultraviolet spectrum, that even humans can’t see.

Hawks are known for their hunting capabilities. They dive at high speed to take out prey. For this, they need excellent vision.

But how good is a hawk’s vision? What can these raptors see from the sky?

Researchers have long pondered this question, and recent studies have shed some light on the matter.

In this article, we’ll discuss a hawk’s vision, how far they can see, how sharp their vision is, and good it is compared to human vision.

How Good Is a Hawks Vision?

Hawks vision is the best in the animal kingdom. The hawks’ sharp eyesight allows them to see prey from miles away. This, and other adaptations, help hawks prey on animals.

This long-distance vision allows hawks to spot small animals from miles away and swoop down on them quickly before they run away or hide.

Do Hawks Have Sharp Vision?

Hawks have very sharp vision. They can see things clearly from 100 feet away. A hawk’s eyesight is five times sharper than humans.

While eyesight is typically determined by the size of a creature, and the size of their eyes, this is not true for hawks.

These small animals, weighing between one and three pounds, can see much better than humans. Not only do they have better visual acuity, but also much better color vision.[1]

The hawk’s eye itself would be about the size of a human’s thumbnail if laid out flat on its back.

Hawks’ eyes are also protected by bony structures around their eyes called sclerotic rings. This helps protect hawks from injury and, like humans’ astigmatism, pterygium (benign growth of the cornea) is common in hawks.

What Vision Do Hawks Have?

If hawks’ vision was measured on the human scale, they would have about 20/4 or 20/5 vision.

20/20 vision is the perfect vision – for humans. This scale refers to the distance between the subject and an object. If you’re standing 20 feet away from an object and can see it clearly, you have 20/20 vision.

This is because hawks have several adaptations that allow them to see extremely well.

A hawk’s eyes are almost as large as a human’s but are also much more tightly packed with retinal receptors. These are specialized receptors for picking up light.

Hawks have an amazing field of vision of 280 degrees. This allows hawks to see almost around them, even behind them. However, hawks have blind spots just like us humans do.  The hawks’ blind spot is directly under their beak and tail.

A hawk has a 280-degree field of view, with only a 40-degree overlap (the space where both eyes can see) in the middle.

In contrast, humans have a 200 degrees field of view with a 100-degree overlap. However, humans aren’t as skilled in using peripheral vision as hawks are.

Since hawks have two foveas in each eye, one binocular and one peripheral, they can see much better out of the side of their eyes.

Hawks have 4 to 5 times better vision than humans. Not only their visual acuity but also their color vision is superior to that of a human.

The retina is made up of cones and rods. These are specialized cells. Hawks not only as rods and single cones, but also double cones, in a ratio of 2:1:5. These double cones improve their visual acuity and color detection abilities.[2]

Humans, on the other hand, have only one-third of the rods hawks do, which allows us to see colors and sharp images, but not on the same level.

Humans have a single fovea in their eyes – the spot in the back of the eye that has the highest density of rods and cones. Hawks have two foveas.[3]

Hawks have two eyes. Like other birds of prey, have incredibly powerful eyesight. The hawks’ eyes are built to spot and track their prey from high above the ground.

Hawks have two eyes, located on the sides of their head. This results in a wide field of view, and a reduced need to turn their heads to see.

Their eyes are built for hunting. Their eyeballs are large in size (relative to their body size) which allows them to see very well at a distance.

As stated earlier, they have an additional fovea, one central and one peripheral fovea (in each eye). This, again, results in enhanced peripheral vision.

Hawks have a tetrachromatic vision, meaning they have four different color receptors in their retina: red, blue, green, and ultraviolet. This allows them to see more than 100 million different color shades, even ones that humans can’t see.

Both Central and a Peripheral Fovea

Hawks not only have a central fovea, but also a peripheral one. The fovea is the spot in the back of the eye where we have the most cone and rod cells[5].

Hawks also have both, as well as the peripheral fovea, meaning they can see just as well from their peripheral vision, as we can by looking straight at something.

The fovea is a small depression in the retina, where cone cells are most concentrated.

There are two types of photoreceptors in the retina: rods and cones. Rods are more numerous and respond faster, and cones are less plentiful but they see color.

How Far Can Hawks See?

A hawk can spot medium-sized prey from a mile away, though they can see even farther than this, depending on what they’re looking for. They can also spot small prey from hundreds of feet.

The sharp, forward-facing vision of hawks allows them to see over great distances. This means that they can spot some prey animals from a mile away.

The question “how far can hawks see” very much depends on what they’re looking for.

Hawks scout from the air. While flying, they’re looking for prey. They’ll track their prey, calculating the optimal time to strike.

Hawks can see color,  and they can see more than humans. Hawks have tetrachromatic vision, meaning they have four different cone cells for four different colors: red, blue, green, and ultraviolet.

Humans have trichromatic vision, as we base our colors on three initial colors: red, blue, and green. We can’t see colors outside of this spectrum.

But this is not the case for all animals.

Hawks, along with bees and horses, can see ultraviolet light because their eyes have a special type of visual receptor called an ultraviolet receptor.

How Do Hawks Use Their Vision?

Hawks (Falconiformes) are birds of prey that belong to the Accipitridae family. They occur all throughout North America, Europe, Asia, and Africa. Some other families in the order Falconiformes include eagles, kites, harriers, buzzards, and Old World vultures.

All of these birds have great eyesight for one main reason: hunting.

The eyes of a hawk are located at the front of its head and point forward. This gives them binocular vision (the ability to see clearly using both eyes), which is ideal for hunting prey during flight.

A hawk’s vision is much better than a human’s. They can see four to five times better and can see ultraviolet colors – something that humans can’t. There are several reasons for their enhanced vision, such as an additional fovea, single and double cones cells, and large eyes for their size.