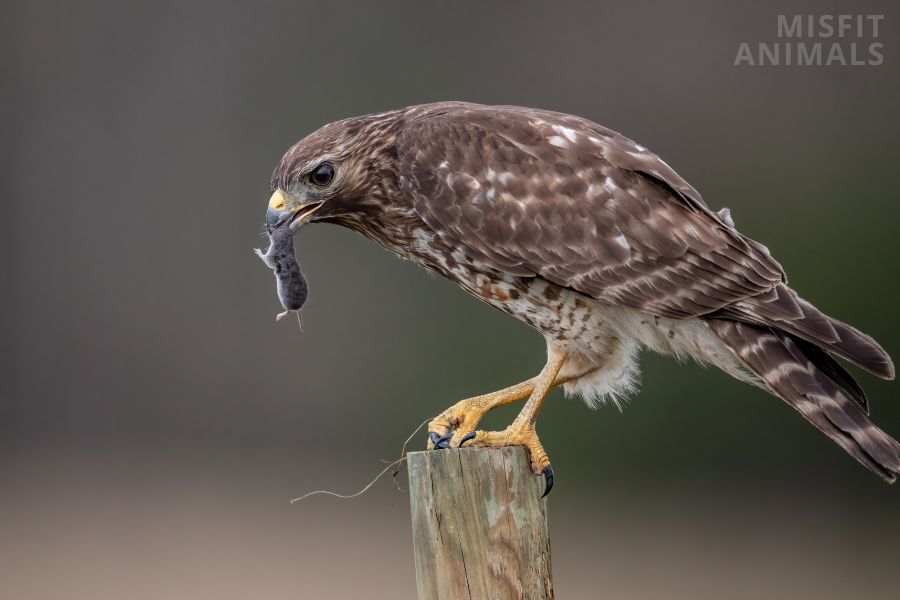 Did you know that Ohio is home to some hawks?

These birds of prey are fascinating creatures, and there are a few things that you should know about them before you go out looking for them.

In this blog post, we’ll discuss the basic facts about hawks in Ohio, so keep reading to learn more!

Are There Hawks in Ohio?

Yes, there are hawks in Ohio. There are a few different species of hawks that can be found throughout the state. Some of the most common species include the red-tailed hawk, Cooper’s hawk, and sharp-shinned hawk.

Hawks are typically large birds with long wings and tail feathers. They also have sharp talons and beaks, which help them to hunt for prey.

The different species of hawks vary in size and coloration, but they all share these basic physical characteristics.

Hawks are easily recognizable thanks to their sharp eyesight and impressive hunting skills[1]. They can also grow large, with some species reaching up to two feet in length.

As for their plumage, it can vary depending on the species of hawk. Many hawks have brown or gray feathers with lighter markings on their chests.

The 9 Most Common Hawks in Ohio

In Ohio, the red-tailed hawk is the most common hawk. It is found in woodlands, grasslands, and even near urban areas.

This hawk is a predatory bird and will eat small mammals, reptiles, and birds. The red-tailed hawk is a protected species in Ohio and it is illegal to kill or harm one.

The sharp-shinned hawk is a small hawk that is a common breeder in Ohio. This hawk is a member of the Accipitridae family, which also includes eagles, kites, and harriers.

It is the smallest hawk in North America, and it is one of the most agile flyers in the bird world. It has a short, hooked beak, and its diet consists mostly of small birds.

The Sharp-Shinned Hawk is a migratory bird, and it can be found in Ohio during the spring and fall.

During the breeding season, the male hawk will build a nest in a tree or shrub, and the female will lay 3-5 eggs. The young hawks will fledge after about 4-5 weeks.

The Red-Shouldered Hawk is a very popular bird in Ohio. It can be found in many different habitats, including forests, fields, and even backyards.

This hawk is known for its red shoulders, which are really just patches of red feathers. The rest of the bird is mostly dark brown or black. Juvenile birds have more muted colors, but they still have distinctive red shoulders.

The Red-Shouldered Hawk is a fairly large bird. It can grow to be about 18 inches long, with a wingspan of up to 4 feet.

This hawk is a raptor, which means that it hunts other animals for food. The Red-Shouldered Hawk primarily eats rodents, such as mice and squirrels. It will also eat reptiles, amphibians, and small birds.

The Northern Goshawk is a large bird of prey that can be found in Ohio. It has a long tail and short, broad wings. The adult goshawk is blue-gray above and white below, with a barred tail. The juvenile is brown above and streaked below.

The Northern Goshawk occurs in both coniferous and deciduous forests. It is a year-round resident in Ohio, although some birds may move south in the winter.

The goshawk nests in trees, laying 3-5 eggs. The female incubates the eggs for about 30 days.

The Cooper’s Hawk is a medium-sized hawk. The adult male is about the size of a crow, while the adult female is about 25% larger. They have long tails and relatively short, rounded wings. Their heads are small with a sharply hooked beak.

Cooper’s Hawks are forest hawks, meaning they live in wooded areas. In Ohio, they are found in woodlands, suburbs, and even some cities. They stick to areas with trees, since that is where their main food source (small birds) can be found.

Cooper’s Hawks are one of the few types of hawks that actually eat other birds. They will also eat small mammals, reptiles, and insects. When hunting, they will sit in a tree and watch for their prey. Once they see something, they will quickly fly down and grab it with their sharp talons.

The Broad-Winged Hawk is a raptor, or bird of prey found in Ohio. These hawks are easily identifiable by their brown and white striped tails and their black wingtips.

Adults have a wingspan of about 3 feet and typically weigh between 1 and 2 pounds.

Broad-Winged Hawks are migratory birds, meaning they travel to different areas at different times of the year.

In the spring and summer, they are in wooded areas across the eastern United States and Canada. In the fall, they migrate south to Central and South America.

Although not as common as some other hawk species, the Rough-Legged Hawk is a regular winter visitor to Ohio.

This hawk gets its name from the feathering on its legs, which is rougher than that of other hawks. The Rough-legged Hawk is found in both open and forested areas and hunts primarily from perches, although it will also engage in hovering and ground hunting.

This hawk typically preys on small mammals, such as voles and mice, but will also take birds and insects.

It is a medium-sized hawk, with a body length of 15-20 inches and a wingspan of 36-44 inches. Adults have dark brown upper parts and light golden-brown underparts, with streaked breasts and barred tails. The legs are feathered all the way down to the toes, as mentioned before, and the underwing is strikingly pale.

The Northern Harrier is the common name for a North American bird of prey. This hawk is also sometimes called the Marsh Hawk.

It belongs to the Accipitridae, a family of diurnal raptors that also includes the eagles, kites, and harriers. The Northern Harrier is found throughout North America, from southern Canada to northern Mexico.

The Northern Harrier is a carnivore, and its diet consists primarily of small mammals such as voles, lemmings, and mice. It hunts by flying low over the ground and using its keen eyesight to spot its prey.

What Do Hawks Eat in Ohio?

Hawks are carnivores, which means that they primarily eat other animals[2]. Their diet typically consists of small mammals, reptiles, and birds.

They will also eat invertebrates such as insects and worms. When hunting, hawks will perch on a high branch and wait for their prey to come within range. Once they spot their prey, they will swoop down and grab it with their sharp talons.

Hawks in Ohio Depending on the Season

Hawks are a common sight in Ohio, and they can be seen in nearly every county throughout the state. The most common species is the red-tailed hawk, but Cooper’s hawks and sharp-shinned hawks are also frequently spotted. Hawks typically migrate south for the winter, but some may stay in Ohio if there is an adequate food supply.

The best time to see hawks in Ohio is during the fall migration, which typically takes place from September to November. This is when large numbers of hawks can be seen flying south along the shores of Lake Erie. Some of the best places to watch for migrating hawks are The Wilds in Muskingum County, Ottawa National Wildlife Refuge in Lucas County, and Magee Marsh Wildlife Area in Ottawa County.

During the winter months, hawks can still be seen in Ohio, but they are more dispersed and less likely to be spotted in large numbers. Red-tailed hawks are the most likely to stay throughout the winter, while Cooper’s hawks and sharp-shinned hawks are more likely to migrate south.

If you’re interested in seeing hawks in Ohio, the best time to do so is during the fall migration. However, you may still be able to spot a few during the winter months if you know where to look.

Hawks in Ohio During Fall

As the leaves begin to change color and fall from the trees, many people think of warm drinks and cozy fires. However, for bird enthusiasts, fall also means hawk migration season!

Every fall, thousands of hawks migrate south from their breeding grounds in Canada and the northern United States. Some species of hawk travel over 2,000 miles during their migration.

One of the best places to see hawk migration in Ohio is at Cuyahoga Valley National Park. The park is located along the migration route known as the “Atlantic Flyway.” Every year, hawks and other birds of prey use this flyway to migrate between their breeding and wintering grounds.

During hawk migration season, the park’s nature center offers free “hawk watches.” These events give visitors the opportunity to see hawks up close and learn about these amazing birds.

Hawk migration typically peaks in Ohio in mid-October. So if you’re looking for a fun and educational fall activity, be sure to check out a hawk watch at Cuyahoga Valley National Park!

Hawks can be found throughout Ohio, but they are most commonly seen in rural areas. This is because these areas provide the hawks with plenty of open space to hunt and plenty of trees for them to nest in.

If you live in a rural area of Ohio, there’s a good chance that you’ve spotted a hawk or two.[3]

Here are some of the best places to see hawks in Ohio.

The Great Miami River is another great place to see hawks. This river is home to many different types of fish, which attracts a variety of hawks to the area. Cooper’s hawks, red-tailed hawks, and Sharp-shinned hawks are all commonly seen along the Great Miami River.

How Many Types of Hawks Live in Ohio?

There are at least 9 types of hawks that live in Ohio. The most common type of hawk is the red-tailed hawk, but other types of hawks, such as Cooper’s hawk and Sharp-shinned hawk, are also found in the state.

Where Can You Typically Find Hawks in Ohio?

Hawks can be found throughout Ohio, but they are most commonly seen in rural areas. This is because these areas provide the hawks with plenty of open space to hunt and plenty of trees for them to nest in.

How Many Hawks Live in Ohio?

There are at least 10 million hawks in Ohio. Between 1-2 million of these Hawks migrate through the state each year in the fall and winter.

Are Hawks Protected in Ohio?

Yes, hawks are protected in Ohio. State and federal laws protect all species of hawks, falcons, and eagles (birds of prey) as non-game. Shooting them is illegal.

What Is the Largest Hawk in Ohio?

The largest hawk in Ohio is the Rough-legged Hawk. This type of hawk can have a wingspan of up to 6 feet!

What Are the Other Raptors in Ohio?

The other raptors in Ohio include the bald eagle, golden eagle, osprey, and peregrine falcon. These are all large birds of prey that can be found in various parts of the state.