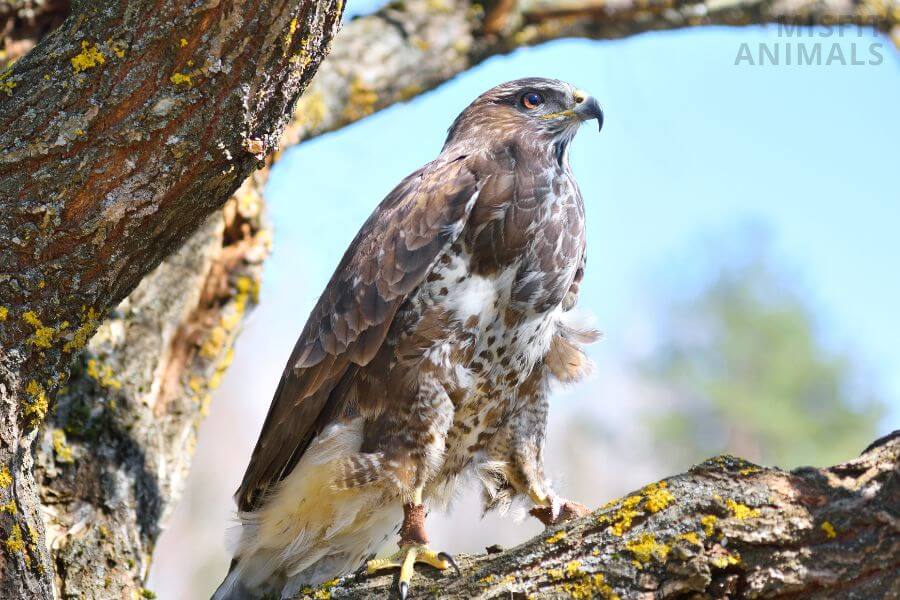 Did you know that hawks can be found living all throughout New York State?

But, they’re not always easy to find.

In this article, we’ll introduce you to the eight most common hawks in New York, their habits, and their habitats.

Are There Hawks in New York?

Yes, there are hawks in New York. There are eight common types of hawks that can be found throughout the state. These include the red-tailed hawk, Cooper’s hawk, and sharp-shinned hawk.

The Rough-Legged Hawk is a hawk found in New York City. It has a light brown body with a white belly and black streaks on its wings.

This hawk hunts by perching on a high spot and watching for prey below. It eats small mammals, such as mice and voles.

The Rough-legged Hawk nests in trees or on cliffs. It lays 3-5 eggs which are incubated for 28-32 days. The young hawks fledge at about 42 days old.

This bird of prey is a protected species in New York State.

The Broad-Winged Hawk is one of the most common hawks in New York City. These birds are small to medium-sized with long, broad wings and short tails[1].

Their plumage is usually dark above with light streaks on their breast and belly. The undersides of their wings are typically red or rust-colored.

They breed in forests throughout much of the eastern United States. In New York City, they can be found in wooded areas of Central and Prospect Parks.

They primarily eat small mammals and birds. To hunt, they perch on a high spot and watch for prey below. When they see an animal, they swoop down and grab it with their talons.

Another one of the common hawks in New York City is the Sharp-Shinned Hawk. This small hawk is a year-round resident and can be found in all five boroughs.

The Sharp-Shinned Hawk is a member of the Accipitridae family, which also includes eagles, kites, harriers, and Old World vultures.

This is the smallest hawk in North America, with a body length of 9-13 inches and a wingspan of 15-21 inches.

The red-tailed hawk is a large bird of prey that can be found throughout North America. In New York City, these hawks are most commonly seen in Central Park and Prospect Park.

While they typically hunt small mammals like squirrels and rabbits, they have also been known to eat birds, lizards, and snakes.

These hawks are easily recognized by their reddish-brown tail feathers, which give them their name. They have a wingspan of up to four feet and weigh up to three pounds. Females are typically larger than males.

Red-tailed hawks are generally shy around humans, but they do sometimes perch on buildings or statues in search of prey.

Another hawk commonly seen in New York City is the Cooper’s Hawk. It is a medium sized hawk with a long tail and short wings. The Cooper’s Hawk hunts small birds and mammals.

The upper parts are blue-gray with white underparts.

As in many birds of prey, the female Cooper’s Hawk is considerably heavier than the male, weighing 24 to 42 ounces, while males weigh only 15 to 24 ounces.

The Northern harrier (Circus hudsonius), also known as the Northern Marsh Hawk, is a common breeding bird of prey in North America. The term “harrier” is derived from the Old French heron, meaning “bird of prey”.

Northern Harriers are large hawks with long legs and broad wings. They hunt low over fields and marshes, using their long tail and wings to maneuver through the grasses.

The Northern Harrier inhabits a variety of habitats, including marshes, meadows, and open woodlands. It typically nests in trees or shrubs, but will also nest on the ground.

The red-shouldered hawk is a common hawk in New York City. It is a medium-sized hawk with reddish-brown upperparts and streaked, white underparts.

The red-shouldered Hawk is often seen perching on telephone poles or flying low over fields and roads in search of prey. This hawk feeds on small mammals, reptiles, frogs, and insects.[3]

The best time to see the Red-Shouldered Hawk is in the spring and summer. These hawks are most active during the day.

The Northern Goshawk (Accipiter gentilis) is a large hawk, and the type species and member of the genus Accipiter. It is sometimes referred to as simply the “goshawk”, especially in older literature.

This species was first described by Linnaeus in his Systema Naturae as Falco gentilis. The scientific name is derived from Latin words accipiter meaning “hawk”, and gentilis meaning “gentle”.

The northern goshawk is a raptor with short, broad wings and a long tail, measuring 34 to 40 cm (13 to 16 in) in length. The adult has grey upperparts with white underparts streaked with thin bands of dark brown.

Its head is blue-grey with a thin white supercilium and wide black moustache stripes that meet at a point below the beak; its cere is yellow. The eyes are red.

Hawks in New York Depending on Season

As the summer comes to an end and the leaves start to change color, many birds migrate. One group of birds that is particularly interesting to watch during this time of year is hawks.

If you’re interested in seeing hawks in New York, the best time to go is during the fall when hawks are migrating south. During migration, hawks are seen flying over open areas such as lakes, fields, and roads.

Some of the best places to see hawks in New York during migration are the Finger Lakes region, the Catskills, and Long Island.

Hawks in New York During Spring

As the weather warms up, New Yorkers can expect to see more hawks out and about.

These birds of prey are a common sight in the city, particularly during the springtime when they are looking for mates.

Hawks in New York During Summer

Every summer, a number of hawks make their way to New York City, much to the delight of bird enthusiasts and casual observers alike.

While they can be found throughout the five boroughs, the hawks are most commonly spotted in Central Park, where they have become something of a tourist attraction in recent years.

Hawks in New York During Fall

As the leaves begin to change color and the weather cools down, migrating hawks can be seen in New York. These birds of prey are a welcome sight after a hot summer, and they offer a chance to see some incredible aerial displays.

There are several different species of hawks that can be found in New York during fall, including the red-tailed hawk, Cooper’s hawk, and sharp-shinned hawk. Keep your eyes peeled and you might also spot a rarer sighting, like the goshawk or peregrine falcon.

Hawks in New York During Winter

The most common hawk in New York during winter is the red-tailed hawk. These hawks are large birds, with wingspans that reach up to four feet.

Many other hawks have already migrated at this time of year.