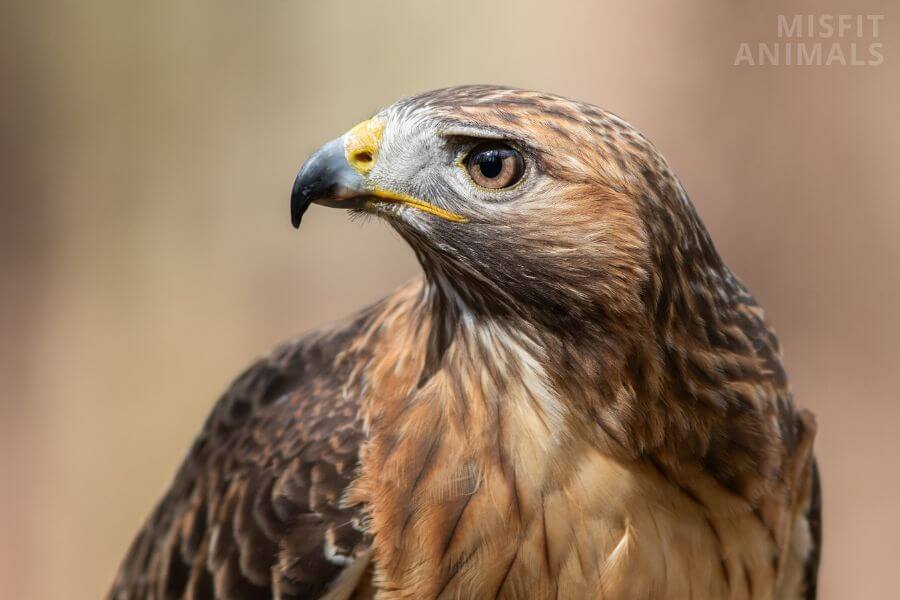 Hawks are a common predatory bird in Georgia. These birds of prey are seen soaring in the sky or perched on a tree.

In this article, we will explore the different types of hawks that can be found in Georgia and what makes them unique.

We will also discuss some interesting facts about these fascinating birds.

Are There Hawks in Georgia?

Yes, there are hawks in Georgia. There are six different species of hawks that can be found in the state: the Cooper’s hawk, the red-shouldered hawk, the broad-winged hawk, the sharp-shinned hawk, the red-tailed hawk, and the kestrel.

While hawks do live in Georgia, they are not the only birds of prey in the state. Along with hawks, you can also spot eagles and falcons.

Types of Hawks in Georgia

Cooper’s Hawks are the most common hawk in Georgia. They are medium-sized hawks with long tails and short, rounded wings.

The Cooper’s Hawk is a woodland bird, meaning it is found in both rural and urban areas[1]. This type of hawk is known to hunt by perching in a high spot and then swooping down on its prey. It typically preys on birds and small mammals.

The Cooper’s Hawk is a relatively small hawk, measuring about 14-20 inches in length with a wingspan of around 3 feet.

The male and female Cooper’s Hawks are similar in appearance, although the female is usually slightly larger than the male. Both sexes have blue-gray upperparts and rusty-red underparts.

The Red-shouldered Hawk (Buteo lineatus) is a medium-sized hawk, commonly seen in Georgia. This hawk gets its name from the reddish color of its shoulders, which are visible when the bird is in flight.

This hawk can be identified by its large head and tail, and its distinctive call, which has been described as sounding like a “chick-a-dee-dee-dee.”

The Red-shouldered Hawk is a forest hawk, meaning that it prefers to live in wooded areas. This hawk can be found in both deciduous and coniferous forests and is often seen perching in trees near the forest edge.[2]

It uses its powerful talons to capture prey, which includes small mammals, reptiles, and birds.

The Red-shouldered hawk is a sexually dimorphic species, meaning that the males and females look different. The male Red-shouldered Hawk is larger than the female, and has a more brightly colored plumage.

The broad-winged hawk is a large hawk found in woodlands throughout the eastern United States. These hawks are known for their wide wingspan and their loud call.

Broad-winged hawks are relatively common in Georgia, and they are often seen soaring over forests or hunting in open fields.

These hawks are relatively small compared to other hawk species, but they make up for their size with their wide wingspan. Broad-winged hawks have long, broad wings that allow them to soar effortlessly over forests and fields.

These hawks are also known for their loud cry, which can be heard over long distances.

Broad-winged hawks are mostly brown and white, with a dark band across their wings. They are typically seen in pairs or small groups, as they are not very social creatures.

However, during the fall migration season, large flocks of broad-winged hawks can sometimes be seen flying south together.

The Sharp-shinned Hawk is a small hawk in Georgia and other parts of the southeastern United States. This hawk is distinguished by its long, thin legs, which give it its name.

Sharp-shinned hawks prey on small birds, such as sparrows and finches. These hawks are sometimes called “bird hawks” because of their diet.

The Sharp-shinned Hawk is a small hawk, measuring 9-13 inches in length and weighing only 3-7 ounces[3]. As its name suggests, this hawk has long, thin legs. It is mostly gray with white stripes on its belly, but its eyes are large and yellow.

These hawks perch in trees and bushes, waiting for their prey. When a small bird comes near, the Sharp-shinned Hawk will fly out and capture the bird in its talons.

The Red-tailed Hawk (Buteo jamaicensis) is a large hawk of the family Accipitridae, which also includes eagles, kites, and harriers. It is one of the most common hawks in North America, and it is often seen in open country or on the edges of woods.

The upper parts are brownish, while the underparts are pale with dark streaks. The tail is red, as its name suggests. The eyes are yellow, and the bill is black.

The Red-tailed Hawk is found throughout North America, from southern Canada to northern Mexico. In Georgia, it is most commonly seen in the northern and central parts of the state.

It feeds on a variety of small animals, including rodents, snakes, and birds. Before attacking, they sit on perches, watching for prey below. When it sees an animal, it swoops down and grabs it with its sharp talons.

Kestrels are the smallest hawks in Georgia. They are versatile hunters and will eat almost anything they can catch. They are typically found near open fields and meadows where they can perch and scan the ground for prey.

There are two types of kestrels in Georgia:

American kestrels are the more common of the two, found throughout the state. Merlins are much less common, typically only found in the northern parts of Georgia.

Kestrels are relatively small hawks, with a body length of around 12-16 inches. They have long, narrow wings and The American kestrel is easily distinguished by its rusty red back and tail. The merlin is mostly blue-grey in color.

Kestrels are relatively easy to spot, as they are often seen perching on power lines or fence posts. They are also one of the few hawks that can hover in mid-air, making them even easier to spot when they are hunting.

Hawks in Georgia Depending on Season

As the weather begins to cool down in Georgia, many people think of migrating birds heading south for the winter. However, there are some types of hawks that stay in Georgia all year long.

Here’s a look at which hawks you might see depending on the season:

Hawks in Georgia During Spring

As the days get longer and the weather gets warmer, birds start coming back from their winter migration. One type of bird that is sure to return to Georgia is the hawk.

There are several species of hawks that can be found in the state, including the red-tailed hawk, Cooper’s hawk, and sharp-shinned hawk.

While they are seen year-round, they are most active during the spring and summer months.

Hawks in Georgia During Summer

All types of hawks that normally reside in Georgia are seen in the summer. The temperature suits them at this time of year, as it’s not too cold.

Hawks in Georgia During Fall

Fall is the time of year when hawks start migrating. Fall is the best time to catch a glimpse of them as they migrate south for the winter.

The Broad-winged Hawk is especially known for migrating in the fall. They will soar to the skies in large kettles, before flying off to South America.

Hawks in Georgia During Winter

Many hawk species live in Georgia throughout the entire year, as the temperatures are often tolerable in the state. Hawks tend to migrate earlier and more often in the more northern states, as the winters get colder.

In Georgia, there are several different species of hawk that can be found living in various habitats throughout the state.

This depends on the hawk: