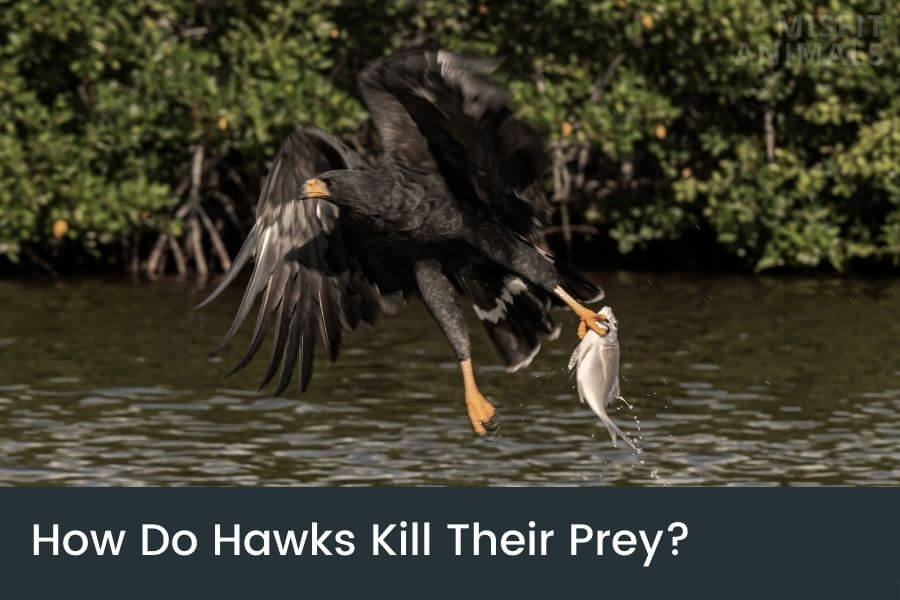 Hawks kill their prey with their talons (claws). They will claw their prey, choke them with their feet, as well as break their necks. They also use their sharp beaks.

Hawks are some of the most fearsome predators in the bird world. Their hunting skills make them a force to be reckoned with.

So, what is it that makes hawks such objects of fascination for bird watchers? How do they kill their prey? What kind of prey do hawks typically hunt?

In this article, we’ll discuss these talking points, and take a look at why hawks are so skilled at hunting.

How Hawks Kill Their Prey?

Hawks start their attacks from the air. They’ll dive down, reaching high speeds (up to 120 mph), and hit their target prey with their talons.

After the hawk has incapacitated its prey by sinking its powerful talons into it or knocking it to the ground with its wings, it will kill it with a blow to the neck or by breaking the spine.

Here are some of the ways hawks kill their prey:

They Use Their Sharp Talons

A hawk’s primary means of killing its prey is with the talons located on its feet. These talons are strategically placed so that when a hawk swoops down for its prey, it can catch and hold on to the prey.[2]

This is different from other birds of prey that primarily use their beaks.

Hawks Kill Prey With Their Beaks

These impressive birds of prey not only have very sharp talons, but also very sharp beaks.

Hawks hunt in the daytime, using their finely-tuned vision to locate prey on the ground below. Once they’ve spotted prey, they swoop down swiftly and kill it with their beak.

They also use their prey to rip apart the meat after they’ve killed their prey.

Do Hawks Choke Their Prey?

Hawks choke their prey using their feet. A hawk will use its beak to hold the prey in place while the sharp talons grip around the throat tightly until the bones break, puncturing vital organs and causing internal bleeding.

Once the prey stops moving, the hawk pulls out its beak.

Hawks Will Break Their Preys Neck

Hawks will also break the neck of their prey. They do so using their powerful feet. Similar to when choking their prey, they’ll wrap their feet around their neck, squeezing until it breaks.

How Hawks Attack Their Prey?

Hawks attack their prey using the element of surprise. They use altitude to their advantage. By starting their attack from the sky, or from a tall tree, they can reach incredible speeds before hitting their prey.

Hawks have different strategies which they implement when attacking:

A hawk starts its attack from above. They’ll scout for prey, and prepare their attack once they’ve found a target.

After a hawk has planned its attack, it’ll dive down, reaching up to 120 mph. The hawk swoops down with talons outstretched, attempting to grab the prey with its powerful feet.

These attacks are most successful when it catches the prey animal unaware so that it does not have time to react. However, if the prey does see the hawk beforehand, it’ll still have a difficult time escaping, as hawks are very fast.

Hawks either hunt in open areas, where flying is easy, such as grasslands or fields[1], or in forests, where birds are plentiful.

In open lands, they can reach incredible speeds, which they use to their advantage when attacking. In forests, they can’t fly as fast, but will still surprise their prey.

Hawks Use the Element of Surprise

When hunting, hawks use surprise as their primary weapon. They can reach speeds of up to 120 mph when diving toward prey, giving them a distinct advantage.

With incredibly sharp eyesight and incredible reflexes, soon-to-be prey has very little chance to escape a hawk in midair.

Hawks are very patient when hunting. They don’t want to accidentally give away their presence too soon. Hence, they can stay in the same position for hours.

When the moment is right, it will swoop in for the kill.

Related: How fast can a hawk fly?

Hawks are completely silent when they hunt. They remain silent not to give away their presence. This, again, is to keep the element of surprise, which gives them a major advantage when hunting.

They Stalk Their Prey Before They Attack

Hawks have incredible eyesight, the best among all animals. Hence, they can easily stalk their prey from afar before attacking.

Depending on where they live, they’ll either scout from the air, or from a perch in a tall tree.

When they spot something, they swoop down quickly, using speed and surprise to get close enough to their intended meal to strike it with their sharp talons.

Related: How Good Is a Hawk’s Vision?

Hawks Hunt in Groups or Pairs

Some hawks hunt in groups or pairs. They do this because it’s easier to find and catch prey when they work together. When one hawk spots their prey, it can give a call to let the other know where it is located.

The hawks then fly down from their perch and chase after it until they catch it.

Related: What Is a Group of Hawks Called?

How Hawks Use Thermals to Circle

Hawks are known to soar and circle in the sky. They do this by using thermals. They use thermals to rise up into the air because it saves energy.

Thermals are natural phenomenons. They’re columns of rising air. Hawks use these columns of air to rise and soar, in the sky. This way, they can easily ascend and stay in the sky.

This way of circling in the air has two major advantages:

Related: Why Do Hawks Circle Their Prey?

Do Hawks Kill Their Prey Quickly?

These birds hit their prey with such force that the prey will be dazed and unable to escape.

Hawks are birds of prey, which means that they hunt their prey and kill it before eating it.

They don’t eat their prey alive, but instead kill it and tear it apart afterward.

Do Hawks Eat the Whole Prey?

Hawks don’t eat their prey whole, but they eat the whole prey, meaning, they both eat the meat, bones, and feathers (as long as it’s small enough).

When a hawk catches its prey, it will use its sharp beak to tear it into chunks.  The hawk’s digestive system breaks down the food so that they can easily digest it.

Hawks primarily use their talons to kill their prey. They’re are one of the most skilled and intelligent hunters in nature. They can spot prey from miles away, and then swoop down with lightning speed to snatch up their meal.

Hawks will also use their feet to choke their prey, or break their spine.

When attacking the prey, they rely on the element of surprise. By attacking from the sky, and with very high speeds, they can hit their prey before the smaller animals even notice the hawk.