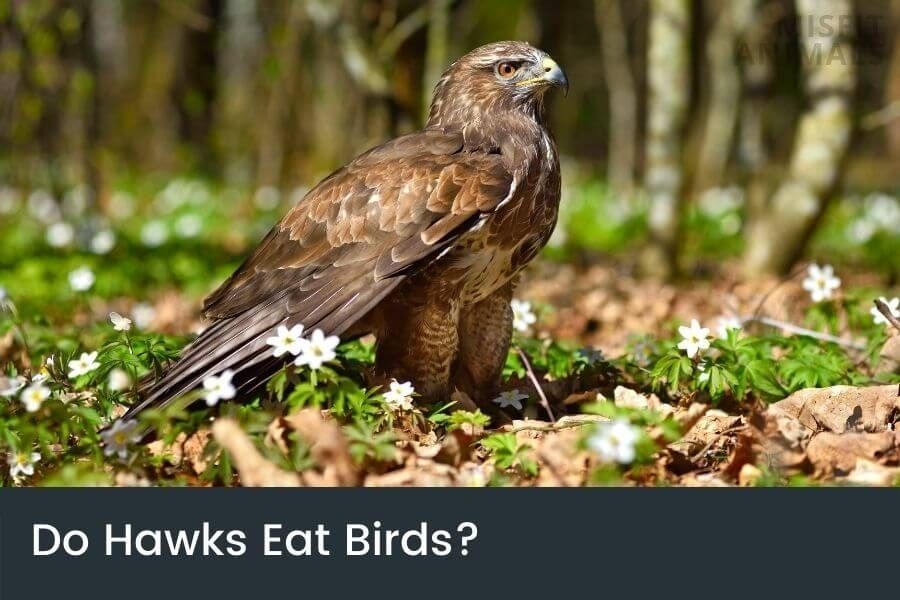 Hawks are magnificent birds of prey, known for their graceful flight and powerful hunting skills.

They feed on a variety of animals, as long as they’re small enough. This, for most hawks, includes birds.

Those are some of the questions we’ll answer in this article.

Yes, hawks do eat birds. Depending on the type of hawk, Accipiter or Buteo, their diet may consist of more birds. Accipiters are known for hunting more birds than buteo, as they live in forested areas that house more birds.

Hawks are carnivorous animals. They don’t have the capability of digesting plant material. Hence, they eat a lot of meat.

They’ll eat whatever is most accessible, and in some areas, birds are the easiest to hunt.[1]

Hawks also eat other animals, such as insects, small mammals, reptiles, amphibians, and sometimes even fish.

What Kind of Birds Do Hawks Eat?

Hawks eat all kinds of birds, as long as they’re small enough for a hawk to kill them. They don’t discriminate when it comes to prey. However, they do tend to eat more songbirds, as these are small.

Their diet consists of a wide variety of bird species, from doves and ducks to cardinals and hummingbirds.

Location is a big factor, when it comes to which birds hawks hunt. Urban hawks hunt more urban birds, and vice versa for hawks living in forests.

Hawks do eat songbirds. Songbirds make up a big part of some hawks’ diet. An example is a sharp-shinned hawk, which solely relies on songbirds for food.

Some hawks tend to eat a lot of songbirds. Depending on the size of the bird, they may eat up to 8 birds a day.

Accipiters, a genus of hawks, are known as bird-hunters and will feed more on birds than hawks that are part of the Buteo genus.

What Birds Do Hawks Eat?

Hawks eat all kinds of birds, including:

As long as they’re small enough, hawks will prey on them.

Songbirds are very common prey for many different types of hawks. Songbirds are particularly easy targets because they’re typically smaller in size.

There do not seem to be any songbirds that hawks don’t eat.

Poultry, including chickens, ducks, and other domesticated birds, is commonly eaten and kept as a livestock animal, and hawks eat these.

Most raptors are interested in poultry, as these animals are bred with the purpose of providing more meat than their wild counterparts.

While most big poultry is too large for hawks to hunt alone, they may take on smaller poultry, their offspring (chicks, ducklings, and so on), or hunt them in groups.

While hawks typically don’t eat other raptors, it does happen occasionally. Large hawks will prey on those smaller than themselves, as they make for an easy kill.

These types of cannibalistic incidents do not happen very often but do occur in the wild from time to time when food is scarce.

Why Do Hawks Eat Other Birds?

Hawks eat other birds because they’re superior. They do so because of how easy it is for them to get a meal. Hawks are known as opportunistic feeders, meaning they’ll take advantage of the prey around them. For most hawks, birds are easy prey.

Birds are plenty. There are many of them, and they live all over the world. There will always be birds to feed on. Hence, hawks have adapted to hunt birds.

As hawks are carnivores, they feed on meat. Hence, they feed on birds. All carnivorous predators eat birds, but not all are as good at catching them like hawks.

All birds of prey feed on other birds. As land-based predators have more difficulty catching birds, they’ll feed on small mammals, rodents, fish, and reptiles instead, hence there’s less competition for birds.

Related: What do hawks eat?

Birds are popular prey for many animals because of their sheer number, including hawks. There are an estimated 50 million birds on the planet, which is more than plenty for hawks to feed on.[2]

If there are plenty of birds to go around, why do the hard work when you can get away with swooping down and picking off a bird?

In fact, more than half of all birds are vulnerable to being eaten by some predator or another, from mammals like foxes to reptiles like snakes.

Related: How much do hawks eat?

How Do Hawks Hunt Birds?

Hawks hunt using their high speed as an element of surprise. They will simultaneously extend their talons to deliver a devastating strike. They also use their sharp beaks to kill birds.

A hawk uses its high speeds as it swoops down on its prey, talons first. A hawk’s powerful legs allow it to deliver a striking blow.

Hawks circle their prey. They do this with thermals, a natural phenomenon of rising air columns.

Hawks have strong, hooked beaks which they can use to form a powerful grip around their prey’s body and feathers, making it difficult to escape. When a hawk finishes feeding, it usually carries away any leftovers to eat in another location.

These birds of prey are also very intelligent. They’re fast learners and adapt to their environment. This has led to hawks feeding on birds that eat from bird feeders.

Hawks will wait patiently by a bird feeder. When an unsuspecting bird arrives, the hawk will strike, taking out its prey.[3]

Do All Hawks Eat Birds?

Yes, all hawks eat birds. The difference is how large a portion of their diet is made up of birds. Some hawks only eat birds, while others rarely do so.

Some hawks are specialized bird hunters. Others prefer to feed on rodents, small mammals, or other animals that live on the ground. It largely depends on habitat, location, and species.

As mentioned earlier, hawks are split into two groups (genus): Accipiter and Buteo.

A Cooper’s Hawk (Accipiter cooperii) is a common type of hawk. The Cooper’s Hawk eats a variety of small animals but mostly feeds on medium-sized birds and mammals.

These hawks are native to North America and can be found from southern Canada to New Mexico.

Sharp-shinned hawks (Accipiter striatus) are carnivorous birds that prey on small birds such as finches and sparrows, as they themselves are small in size.

These hawks are known for exclusively eating songbirds, as they’re too small to hunt anything else (almost)[4]. They’re the smallest of three hawks known as “birdeaters”.

They primarily live in forested areas throughout much of North America, Central America, and South America

The northern goshawk is a medium-large bird of prey found in North America and Eurasia[5]. It’s one of the few raptors that primarily eat other birds and mammals, and also includes fish in its diet on occasion.

This hunting behavior makes them vital to ecosystems where they live.

While the northern goshawk is not considered a threatened or endangered animal, their numbers have been steadily declining in many regions of the world.[6]

There are many reasons why goshawks have been declining in some regions,            but one of the main factors is habitat loss. When forests are cleared to make way for urban development or roads, the habitats of goshawks are destroyed.[7]

How to Keep Hawks Away From Bird Feeders

You can keep hawks away from bird feeders by using netting, avoiding ground feeding, and building a cage. An optional step is to protect windows, as these can attract haws.

If you have bird feeders in your yard, you may also have a problem with hawks. These intelligent creatures know that birds are attracted to the feeders, and will hang out around them.

Knowing how to keep hawks away from bird feeders is important if you want to keep other birds safe.

There are several ways to keep hawks away from bird feeders. Here are a few steps to help you do it:

1. Use Netting or Cover

One way to make your backyard less appealing to these predators is by using netting or cover in your bird feeders.

Covering the top of your feeder with netting is a good way to reduce the chances of hawk attacks on birds that are using your feeder.

Protecting the feeder is not the only step you have to take. You also have to make sure, that they’re not attracted to other things in your garden.

There are a few ways to protect windows from possible strikes:

If you’d like to keep hawks away from your bird feeders, one of the best ways is to avoid ground feeding.

Ground feeding refers to any food being spread on the ground for birds (or other animals) to feast on, whether it’s seeds or other kinds of food.

Ground feeding birds may attract hawks, as birds will hang around outside of protected areas. If you’re feeding dogs or other carnivorous animals, they will also be attracted by the food.

4. Build a Cage or Fence Around the Feeder

One common way to protect a bird feeder is to simply build a protective fence around it. This can be done with wood, chicken wire, or any other material of your preference.

There are many different designs for caging or fencing your bird feeders.

If you are handy with simple tools, you can build a wooden fence or a lattice-style wood fence that will keep the birds safe.

Hawks do eat birds. Accipiters, also known as bird hunters, mostly eat birds but do supplement their diet with other foods. Hawks will eat any bird, as long as it is small enough for them to hunt.

These raptors don’t seem to have a preference, as long as they can kill the bird. Hence, they hunt for all kinds of birds, including poultry, songbirds, and even other birds of prey.