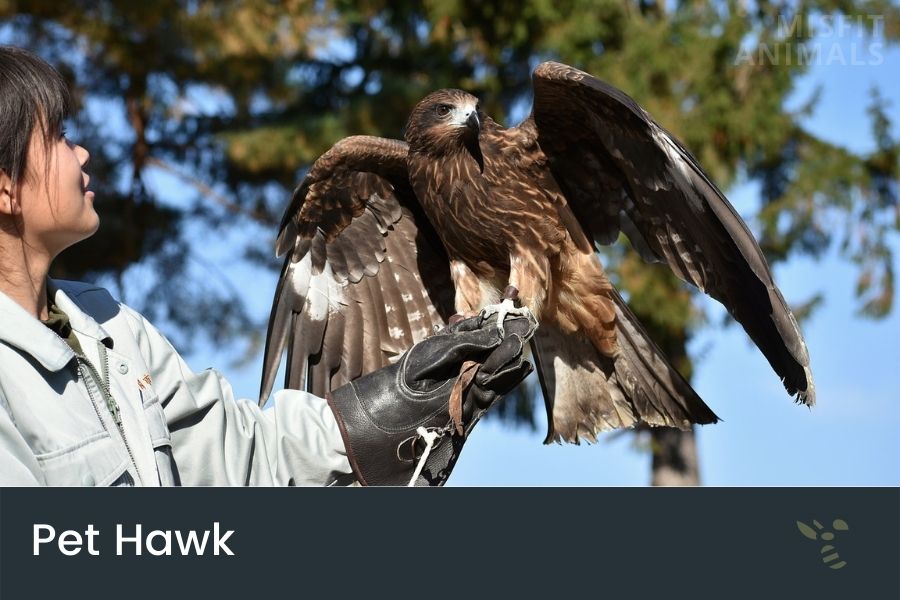 It’s illegal to own a pet hawk, except if you’re a master falconer. To keep a hawk, you need special certification. They’re not easy animals to keep, but they’re very interesting pets.

Hawks make excellent pets for the right person. They are graceful and powerful birds that can be trained to do various tasks.

Owning a hawk does come with some responsibilities, however, and it’s important to understand what is involved in keeping one before making the commitment.

In this article, we’ll talk about what it takes to keep a pet hawk, the costs associated with it, and more.

Is It Legal to Own a Pet Hawk?

While pet birds are common, such as parrots, pet hawks are not, and there’s a very good reason for that: It’s illegal to own a pet hawk without being a master falconer.

Hawks are protected by federal law under the migratory bird treaty act. As you might have guessed, this makes it illegal for anyone except a master falconer to own pet hawks.

You simply can’t go out into the wild, catch a hawk, and take it home. That would be illegal.

Most states have laws that support the federal act.[1]

Related: Can You Own a Pet Falcon?

Do Hawks Make For Good Pets?

Hawks don’t make for good pets, for most people. They take a lot of training and can be very difficult to handle.

If you’re looking for a beginner’s pet, don’t buy a hawk. There are plenty of birds out there that are easier to take care of than hawks (such as canaries, or parrots).

To keep a hawk, you need your master falconer certification. During this training, you will learn how to control a hawk – but that doesn’t mean you pass.

Hawks are birds of prey. They’re territorial, carnivorous, hunters, that need to be able to fly and catch prey.

In other words, they’re wild animals. Domestication and captivity go against their nature.

Here are some of the reasons why hawks don’t make for good pets.

Hawks can only eat meat. Their digestive system can’t process plants, hence it can be difficult to feed them.

A hawk’s diet consists of birds, small mammals, rodents, insects, and other animals, depending on their species.

Pet hawks need a lot of exercises. They need to fly free and hunt their own food. Attempts to keep pet hawks in cages with limited space can result in stress and depression.

Master falconers need to allow their hawks to roam every day, which can take a lot of time. If you don’t have a lot of time on your hands, you’ll end up with a stressed bird, which typically doesn’t end well.

A hawk can be an expensive pet. While they are very majestic animals, they can be expensive to feed, as you need a variety of equipment to keep them.

Hawks in general aren’t cheap as require a special diet and lots of space to be happy and healthy. For example, pet hawks eat about 1lb of beef daily.

Additionally, you need equipment for proper care, and a specialized veterinarian if they ever get injured or fall sick.

Hawks aren’t normal pets. They’re wild birds, and they belong in the wild. Hawks aren’t meant to be caged or domesticated like pet cats or pet dogs, as they haven’t been domesticated as regular pets.

Hence, you can’t just keep a hawk in a cage, as you can with other pet birds.

On top of free foaming, hawks need an aviary. This is essentially a large open space in which they can move around. It’s essentially a very large cage, which can be expensive to build.

When pet hawks fall sick or get injured, they have to be taken to special veterinarians. Hawks that get sick can’t be treated by a regular veterinarian, as these don’t have the necessary training to handle hawks.

Domestication Goes Against Their Nature

Domestication is a process where animals are bred through generations to live in human company. Over time, they’ll develop domestication traits, which allows them to naturally be friendly toward humans.

Hawks haven’t developed this trait, and are hence considered wild animals, even when they’re kept in captivity, either in zoos or as pets.

This is also why it’s illegal in almost every state in the US to keep hawks without special certification. They’re difficult to handle and may act out. They’re unpredictable.

Are Hawks Afraid of Humans?

Hawks are not afraid of humans in general, but they will keep their distance from humans when possible.

Generally, all wild animals keep away from humans. This is a natural adaptation, as they’ve learned over the course of many years, that humans are dangerous.

While pet hawks do have a different relationship toward humans than wild hawks do, they may not be friendly toward all humans.

Hawks are generally territorial animals and will keep anyone who intrudes at bay. This includes humans.

Related: What Are Hawks Afraid Of?

How Much Does a Pet Hawk Cost?

Pet hawks cost between $800 and $2000 depending on the species of hawk you want to buy. When choosing a pet hawk, it is important to keep in mind the expenses tied to care as well.

Different species of hawks are priced differently. Silverhawks, Goshawks, Harris Hawks, and Ferruginous hawks are just a few of the pet hawk species that people purchase.

How Much Does It Cost to Feed a Hawk?

While these are just the feeding costs, there are also other costs to consider.

There are many costs to consider when deciding to purchase a pet hawk. Veterinarian costs are expensive, and pet hawks can also require upkeep for their aviary.

If you’re out of town, you also need to pay someone to look after your hawk while you’re gone. This may also be expensive, as there aren’t many pet sitters familiar with hawks.

If you want to buy a pet hawk, you need to be a master falconer. If you don’t have this certification, it’s illegal to keep a hawk as a pet. They’re not easy pets to keep and aren’t suited for most people.