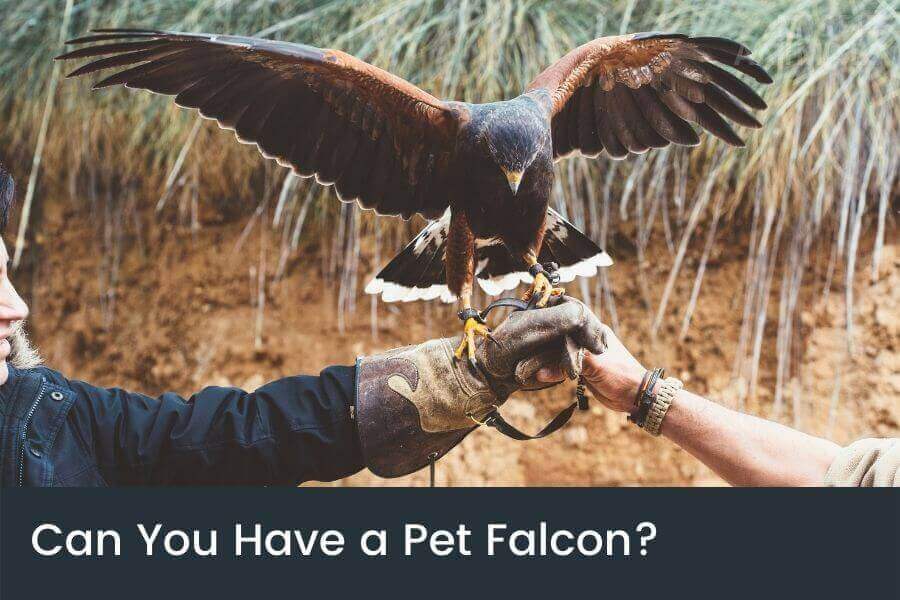 Have you ever considered owning a falcon?

They’re beautiful creatures, and it’s no wonder that so many people are fascinated by them.

However, it’s not as straightforward to buy a falcon as it is to buy a fish or a dog.

In this article, we’ll discuss what it takes to own a pet falcon, what they cost to buy and keep, as well as why most people aren’t suited to own a falcon.

Is It Illegal to Own a Pet Falcon?

It’s illegal to own a pet falcon if you don’t have the necessary permits and certifications. To own a falcon, you need to be a certified falconer, which takes training.

It’s a law that makes it illegal for anyone in the United States of America to capture live or possess dead wild birds, with a few exceptions as provided by law.

Because pet falcons are considered migratory birds under the MBTA, pet falcon ownership comes with a whole host of restrictions.

Related: Can You Own a Pet Hawk?

How to Become a Falconer

To become a falconer or a master falconer, you need to join an organization, study the falcons, attend schooling, obtain your permit, and buy your falcon.

Falconry is the hunting of wild game or other wildlife with a trained bird. This method can be traced back over 2000 years, having started in Persia and China, then spreading throughout Asia, Europe, and North America.

There are two main branches of falconry today:

In traditional falconry, pet birds are used to catch prey for human consumption. The modern form of falconry involves hunting with trained captive animals such as hawks, eagles, and falcons.

The following is a brief guide on how to become an apprentice falconer, including the requirements needed for this level of expertise.

There are many organizations that regulate the practice of falconry, including The North American Falconers Association (NAFA) and the United States Association of Falconry.[2]

The North American Falconers Association (NAFA) is an organization that “shall promote conservation, restoration, and preservation of wild raptors, their breeding grounds, and native ecosystems”.

They also encourage the proper practice of falconry.

There are a number of other organizations dedicated to the protection and conservation of birds.

After joining your state or national association, contact your regional chapter to find a mentor.

A prospective falconer must study the birds needed for hunting. Raptors used in traditional falconry include some members of the Falconidae family (the true falcons) as well as eagles, hawks, and kites.

While it’s not obligatory to attend a falconry school, it’s a good idea. You need to know a great deal about falcons, and the best way to do this is to learn from other people.

After completing your pet training, you must also pass the Falconry Examination with more than 80% correct answers.

Before you can start hunting with pet raptors, you must first obtain a license and also comply with state or national laws. This will require some paperwork and time, but there are many excellent resources online that will guide you through the process.

You need the following to obtain your permit:

Now that you have passed all your exams and obtained the necessary licenses, it is time to get a pet bird and start hunting for food.

You can either obtain one at a pet store or adopt one from an animal shelter.

However, before obtaining your pet raptor, be sure to research how to care for it. You must also obtain pet insurance, vaccinations, and other pet accessories like perches and hunting equipment.

Related: How Much Is a Falcon?

Now that you have your pet falcon trained, you can start using it to catch wild game.

There are some restrictions on the types of pet birds allowed during the hunting process, so be sure to contact your local state or provincial association regarding pet bird restrictions.

5 Reasons Why You Shouldn’t Get a Falcon

Falcons are beautiful animals, but they’re more than that. In fact, pet falcons can be incredibly dangerous animals to get as a pet. Here are five reasons why pet falcons aren’t the best pet choice.

Falcons Are Difficult to Keep

Falcons are difficult pets to keep because they are very intelligent and high-energy, often needing mental stimulation in addition to food and water.

This makes it difficult for pet falcons to stay within the boundaries of their fenced areas. In addition, they can be aggressive and even dangerous to pet owners.

Falcons Can Be Expensive (Purchase and Upkeep)

Falcons are not only expensive to purchase (up to $2,000) but can cost a lot of money for care. If your falcon ever gets injured, or sick, you need to see a specialized vet, which can get expensive.

Falcons have a very particular diet that you can’t provide at home[3]. If fed the wrong type of meat, their health quickly declines and they become more susceptible to infection.

A pet falcon is a beautiful pet to have, but there are some major drawbacks that pet owners should know before bringing one into their homes. One major problem pet owners will encounter is the daily need for a flight.

These birds of prey are used to flying freely every day, and they need to do this in captivity as well. If they don’t get to fly freely, they’ll ultimately end up stressed and depressed.

Falcons Need More Than a Cage

Falcons need more space than what a cage can provide. Typically, you need to acquire an aviary (a very large cage), which is quite expensive.

How Much Is a Falcon?

If you are interested in pet falcons as a hobby, you can expect to pay upwards of $2,000.

Not only is there the initial fee for purchasing the pet falcon, but there are also extra care fees throughout the pet’s life.

Additionally, you need to pay for the permits and licenses needed to own a falcon and hunt wild game.

Where to Buy a Pet Falcon

Falcons aren’t easy to come by. You’ll typically have to go to a specialized seller or buy from private distributors.

Most pet shops won’t sell falcons, as you need a falconer permit to own them. Hence, you need to buy a falcon from a specialized seller.

Thankfully, it’s not very difficult to find one on the internet.

What Does a Pet Falcon Eat?

Falcons are carnivores, and hence eat small prey such as small rodents, small mammals, or small birds such as chickens or quails.

Falcons eat meat. Their digestive system can’t process plants or vegetation, so it’s important not to feed it to them.

As these are smaller birds of prey, they also eat small prey. This includes:

Can you own a pet falcon? Yes, but you need to be a certified falconer to do so. This requires that you pass an exam where you display your knowledge of the birds.

There are also additional regulations on the matter of falconry, that you need to know before buying a falcon.

Falconry is the safest and most humane way to hunt animals. Unlike guns or traps, falconry allows hunters to take their quarry with little to no suffering. Furthermore, birds of prey can be used to control populations of pests such as rodents without resorting to cruel methods like poisoning.

Why is falconry illegal?

What is the purpose of falconry?

The purpose of falconry is to hunt more efficiently, safer, and naturally. The birds are used to locate and capture prey, typically small mammals such as rabbits, hares, and rodents. The falconer relies on the bird’s natural instincts and trained behaviors to catch prey.