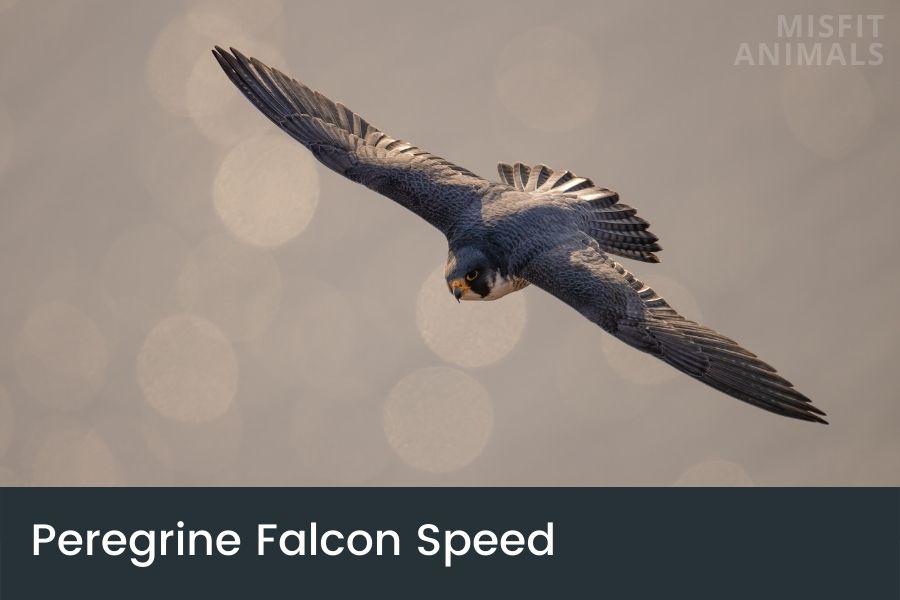 Peregrine falcons are perhaps the most well-known birds of prey. They’re also the fastest birds in the world.

But how fast are they really? Why are they so fast? And what do they use it for?

In this article, we’ll dive deeper into the speed of the peregrine falcon, as well as explain why they are the fastest bird in the world.

The average horizontal flight speed of a peregrine falcon is between 40 to 56 mph (55 to 90 kph).

The peregrine falcon is an exceptional flying bird. Its ordinary flight speed (when flying horizontally) is about 40 to 56 mph and is considered one of the fastest in-level flights among all birds[1].

It can achieve this speed thanks to its “stooping” dive.

They are able to exceed 200 mph because they have evolved along with their prey. By developing faster and faster flight speeds, they can successfully hunt animals.

Peregrines feed on other birds, and they often catch them mid-air. Hence, they need to be fast.

What Is the Fastest Peregrine Falcon Speed Ever Recorded?

The fastest recorded speed of a flying peregrine falcon was 242 mph (390 kph). This record was set by a bird that had been kept in captivity, though it had originally been hatched and raised in the wild.

Why Is the Peregrine Falcon So Fast?

There are numerous reasons that make the peregrine falcon the fastest animal on the planet: they are very aerodynamic, they tuck their wings in when diving, they have pointy wings and a large keel.

Flight is an art that has been mastered by birds. However, the flight style of birds varies greatly.

Here’s why peregrine falcons are the fastest birds in the world.

One study talks about how peregrine falcons manipulate airflow to further increase speed. However, the exact reason for their high speed isn’t fully understood yet.

Related: How Fast Are Falcons?

Most birds are able to fly thanks to strong winds that create an upward flow of air. This same upwards flow is also how planes fly. The air pressure below the wing is higher than the air pressure above the wing – creating lift.

While most birds have broad wings that allow them to glide, the peregrine falcon’s narrow and aerodynamic body helps it move through the air more quickly.

When they dive, they also tuck in their wings. This allows them to create even less air resistance, further increasing their speed.

Peregrine falcons have very pointy wings. This gives them a slender and aerodynamic look, and it helps with speed.

These birds are dashing daredevils, soaring high above the ground and then plummeting down towards their prey at breakneck speed. However, they’re not just great at diving, but also at performing aerial maneuvers.

The peregrine falcon has a very large keel[3]. The keel, or breastbone, is the main bone that attaches the bird’s chest muscles to its wings and provides strength and stability for flight.

This large keel allows peregrine falcons to utilize their flight muscles better and provides them with two advantages:

Why Does the Peregrine Falcon Need to Fly So Fast?

The answer to this question is simple; the peregrine falcon needs to fly so fast because it’s how they hunt. They use their speed along with their quick, sharp eyesight to catch prey that is usually moving.

A peregrine falcon has to fly at high speeds to catch prey. They catch prey in mid-air and on the ground, using their high speed to deliver a devastating blow.

These birds are incredibly intelligent predators and use speed as one of the main advantages in order to catch their food.

Is the Peregrine Falcon the Fastest Animal on Earth?

Yes, the peregrine falcon is the fastest animal on earth. They’re faster than eagles, cheetahs, and all other fast-moving animals. They’re even faster than a Formula 1 car.

Birds are the fastest animals. Plenty of birds flies faster than most land-bound animals.

Many bird species can travel at high speeds when flying, such as the Golden eagle and the grey-headed albatross, but none of them are as fast as the peregrine falcon.

Peregrines are incredible birds that can fly up to 240 mph when diving. When flying horizontally, or straight, they typically fly about 40-56 mph.

This also makes them the fastest birds in the world.

How Far Can a Peregrine Falcon Fly Without Stopping?

While they are not known to fly this distance in any single flight, some have flown approximately 15-20 miles before stopping. Despite these great distances, the peregrine falcon is still known to make many stops on migration. They can fly up to 15,500 miles a year.

How Big Is a Peregrine Falcon?

A full-grown peregrine falcon is about 1.5 feet long, with a wingspan of 4 to 4.7 feet. They weigh between 1 and 3 pounds.

How Fast Can a Peregrine Falcon Dive?

A peregrine falcon can dive at speeds of up to 240 miles per hour. This is the fastest speed ever recorded for a dive by any animal, and it also makes the falcon the fastest living creature.