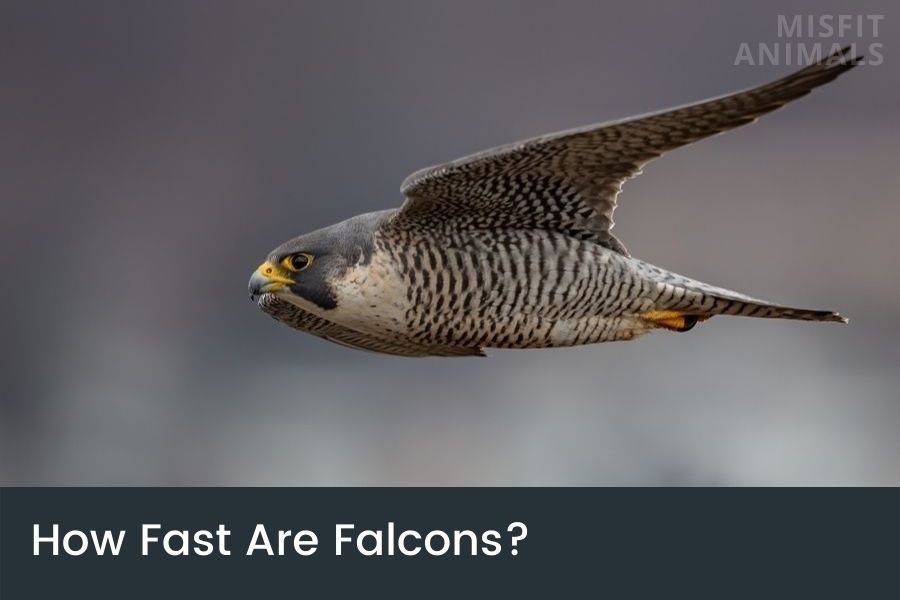 A peregrine falcon can fly up to 240 mph (390 kph) when diving and is the fastest animal in the world. Most falcons are incredibly fast.

Falcons are not only fast, but they’re among the fastest animals in the world.

Do you know how fast a falcon can dive? How about how fast it can fly?

In this article, we’ll take a look at the dive speed and flight speed of falcons. We’ll also discuss why these speeds are important for falcons.

How Fast Are Falcons?

Falcons are known for their fast, agile flight and the ability to dive at speeds up to 240 mph.[1]

Falcons have long pointed wings that allow them to soar over prey and float on air currents before diving down rapidly to seize prey with their powerful talons.

They also have modified shoulder bones that attach to larger flight muscles, allowing for great acceleration. Their legs, feet, and hooked bills are also evolved for speed.

What Is the Fastest Falcon?

The peregrine falcon is a medium-sized bird of prey that nests on cliffs and in other high places.

The small predator mostly eats songbirds such as sparrows and starlings, but it will also eat ducks, geese, and even small rodents like mice.

While about the size of a crow, the raptor is built for speed. With a slender body, hooked beak, long pointed wings (that can stretch 4 feet from tip to tip), and powerful legs that end in sharp talons, this bird is the fastest of them all.

It is dark blue-gray or slate gray on top and pale underneath, with black bars across its white throat.

Related: How Fast Is a Peregrine Falcon?

Why Are Falcons So Fast?

Falcons are fast for a couple of reasons: their bodies are streamlined, they have large keels, and they have pointy wings, all of which help them accelerate faster, and hit higher top speeds.

When diving for prey, falcons are capable of reaching speeds up to 240 mph. But how is this possible?

Falcons can’t maintain the high speed for long as their muscles need time to recover after the dive.

They will only maintain this speed for a few seconds before leveling off.

From top to toe, falcons are streamlined. They have narrow heads, sharp bills, a slender body, and pointy wings, which they’ll tuck into their body when diving.

The keel is an extension of the breastbone. Having a larger keel allows for more power to be generated, as more muscles can be activated when flapping their wings.

This gives them more control over how they move through the air and how they land.

Finally, falcons can “lock” their wings in a fixed position which allows them to glide for very long distances without having to flap their wings.

The shape of a falcon’s wing allows it to reach high speeds[3].  When diving, the wings are tucked into their body. Rather than just being flat, the leading edge of the wing forms a curved line.

This helps them achieve greater speeds, faster, as they almost cut through the air.

Another important aspect of a falcon’s wings is how they are different from other birds’ wings. The bones in a falcon’s wing are relatively short and have almost no space between them at the joints.

This allows for faster wing beats and more control.

Falcons are well known for their incredible speed. These raptors use their flight abilities to hunt prey and survive in the wild.

With their speed, they can dive hundreds of feet at over 200 mph, while simultaneously keeping an eye on their target prey, due to their incredible eyesight.

Here’s how falcons compare to other animals.

Are Falcons Faster Than Cheetahs?

Cheetahs are the fastest land animals in the world. They’re the fastest runners, but they’re not even close to reaching the speeds of a falcon.

While it may be unfair to compare runners and flyers, falcons are significantly faster.

Cheetahs can run between 60-80 mph[3]. They outrun greyhounds, the fastest dog, with ease. However, they can only run this fast for a few hundred feet before they’d tire out.

Are Falcons Faster Than Eagles?

Falcons are faster than eagles, though not by a lot. The fastest eagle can reach 200 mph, while the fastest falcon can reach 240 mph, so there’s a 20% difference.

The peregrine falcon is one of nature’s premier aviators with a maximum dive speed recorded as high as 242 mph.

The golden eagle has a maximum diving speed of 200 mph, meaning they’re just a bit slower, not to say they’re slow. They’re among the fastest birds in the world when it comes to diving speed.

Is a Falcon Faster Than a Hawk?

Yes, falcons are faster than hawks, both in terms of diving speed and horizontal flight speed.

Hawks can fly up to 50 miles per hour during ordinary flights. Hawks typically fly about 30-40 mph. At the same time, falcons also have a significantly higher diving speed, upwards of twice as fast.

The fastest F1 car was recorded hitting 231 mph. The peregrine falcon has been seen flying at speeds around 240 mph. Hence, falcons are even faster than the fastest cars.

Falcons are very fast creatures. Even faster than cars.

While normal, everyday cars aren’t very fast, Formula 1 cars are. These are optimized for speed and have been seen driving upwards of 231 mph. In other words, falcons are faster than F1 cars.

How High Can a Falcon Fly?

While it’s unknown exactly how high they can fly, it’s generally believed that they’ll keep under 3,500 feet.

Falcons will use their speed to dive fast, 0.6 miles (1 km). They’ll keep diving until they reach their prey.

How Far Can a Falcon Fly?

Peregrine falcons are migratory birds and have been seen flying up to 15,500 miles (25,000 km). When migrating, they’ll typically fly from the northern parts of America all the way down to the southern parts of South America.

In conclusion, falcons are one of the fastest creatures on Earth. They can reach speeds up to 240 miles per hour when diving to catch their prey.

They reach these speeds due to their streamlined bodies, pointy wings, and large keels.

They’re faster than all other animals, but not only that. They’re also faster than Formula 1 cars.