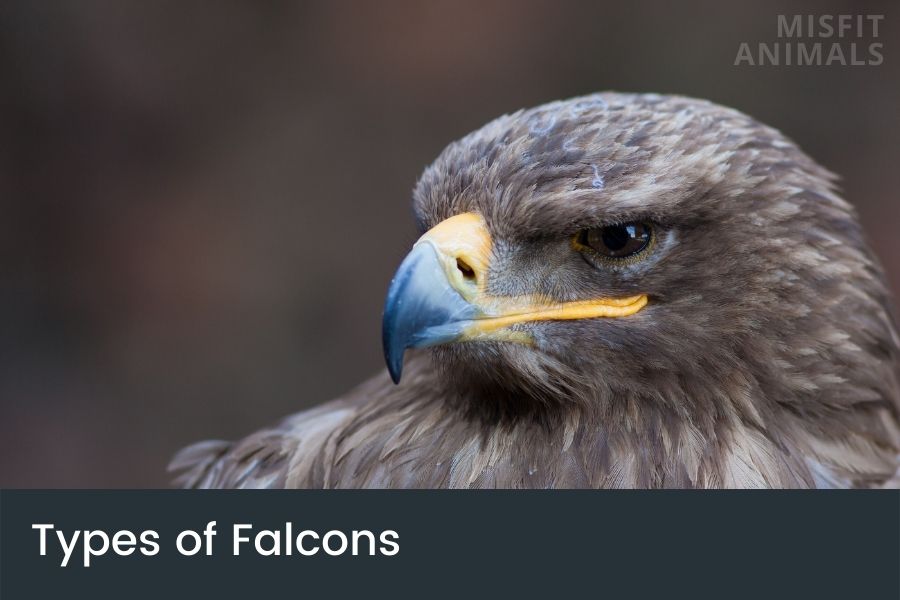 There are about 40 species of falcons in the Falco genus (true falcons). A handful of these types of falcons can be found in the US: peregrine falcon, American kestrel, gyrfalcon, grey falcon, merlin falcon, and prairie falcon.

There are bout 11,000 different bird species, but only 40 of these are falcons. And you can only find a handful of these in the US.

In this article, we’ll introduce you to the most common types of falcons.

From the northern goshawk to the American kestrel, these birds of prey come in all shapes and sizes.

So, if you’re curious about what different types of falcons there are, keep reading. You might be surprised at how diverse these raptors can be.

The peregrine falcon (Falco peregrinus) is the fastest falcon, and animal, on the planet. It is also one of the best falcons at hunting prey. It can fly at speeds up to 200 mph, enabling it to catch prey that is fast enough to escape other types of falcons.

This falcon is a smaller species, though very remarkable. It’s the fastest animal alive. With a top speed of 240 mph (390 kph), not even Formula 1 cars can keep up.

Their heads and throats are covered with brown feathers that form a distinctive cap over their heads. A narrow stripe along the side of their cheeks and chin and two spots near their beaks are black-tipped, forming the “sideburns” that give the species its name.

Its underside is covered with white feathers which, combined with black-tipped sideburns and a dark tail, allow for easier identification of peregrine falcons in flight.

The American kestrel (Falco sparverius), commonly referred to as the “kestrel” by locals, is the smallest and most common falcon in North America. Its sleek body makes it easy for them to fly over open fields.

Falcons are known for their speed and agility in the air. The American kestrel is no exception, able to change directions at high speeds with ease.

They hunt by sight and not by using sound like some other birds of prey species do. By watching where animals tend to congregate or move, they can intercept them on the ground without warning.

Birds, unlike humans, can see ultraviolet light. This allows the kestrel to easily spot trails of urine that their prey leaves on the ground.[2]

The American kestrel’s call is a sharp “kee-aah”. It also produces a rattling trill if it feels threatened and needs to warn other birds.

The Gyrfalcon (Falco rusticolus) is the largest falcon. It lives in very cold climates and eats ducks, geese, rabbits, ptarmigans, gulls, etc. The Gyrfalcon hunts in flight at high speeds.

Gyrfalcons are usually light brown with black markings on their wings when they are young. As they mature, their feathers become almost completely white.

The female Gyrfalcon is larger than the male, which is normal for all raptors.

Gyrfalcons are very strong birds with large feet and yellow eyes. They have a large wingspan of over six feet, measure 19-25.5 inches (48-65 cm) in length, and weigh up to 4.6 pounds.

These birds are mostly used for falconry because of their strength.

In the past, they have been revered as symbols of power and bravery. In the modern world, they are still very popular among birdwatchers and hunters.

The grey falcon (Falco hypoleucos) is the rarest species of falcon. The bird has also been listed as the fourth rarest in the world. There are less than 1,000 found across Australia.

They’re the rarest of falcons and are listed as “Vulnerable under criteria D1” on the IUCN Red List[3]. There are only about 1000 mature individuals.

The grey falcon looks a lot like a peregrine falcon. It has dark feathers with irregular dark streaks going down its chest and sides. Their eyes have a blue eye-ring around them which is fairly faint.

Even though they are rare, these birds are still being hunted by farmers, poachers, and even some scientists who don’t understand how important it is to keep them around.

The merlin falcon (Falco columbarius) is the world’s second-smallest falcon. They typically live in the northern hemisphere but will migrate to subtropical and tropical regions in the winter.

The merlin has a widespread distribution throughout most of North America, Europe, and portions of Africa, Asia, and Australia.

The merlin falcon’s habitat ranges from tundra to prairies and deserts, so long as there is a nearby area of shrubs in which to build their nests.

A male merlin falcon typically has a wingspan of 21-23 inches (53-58 cm), while females are slightly larger.

The merlin falcon is one of the most versatile members of its family. It has been known to hunt:

Within their habitat, these predators tend to prefer open areas such as lawns or meadows, where their keen eyes can see easily identify possible prey.

When they hunt, merlins will fly low to the ground and attempt to catch their target unaware, flying up only at the last moment to seize it in its claws and carry it back to a perch and kill and eat it there.

The prairie falcon (Falco mexicanus) is a bird of prey species that lives in North and South America. The prairie falcon eats small mammals such as rodents and rabbits. They hunt by swooping down and capturing their prey with their powerful talons.

Due to its large range, and increasing population, this species is classified as “Least Concern” by the IUCN Red List[3]. Some of the prairie falcons have even been introduced to a new habitat: airports.

Since many airports consist of grasslands and other open areas, they can be ideal habitats for prairie falcons.

The prairie falcon is a bird of prey species that lives in North and South America. They are small birds, weighing only 1.6 pounds with an average wingspan of 40-45 inches.

The Aplomado Falcon (Falco femoralis) is a medium-sized species of falcon that has the ability to soar for long periods of time. It can be found on its native land in Central/South America.

The Aplomado Falcon’s body is covered in dark brown, red, and black feathers while its chest features horizontal white bands.

The Aplomado falcon primarily hunts in savannas, grasslands, and even in open forests.

How Many Species of Falcons Are There?

There are over 40 different species of falcons, many of which have been studied carefully by scientists because they are threatened or endangered. Falcons are birds in the genus Falco.

There are about 40 true falcons in the genus “Falco”. While most people believe them to be related to hawks and eagles, this is not true.

Both eagles, hawks, and falcons are birds of prey, but they’re members of different orders. Falcons are actually closer related to parrots than hawks.

What Types of Falcons Can You Find in the United States?

There are many types of falcons that can be found in the United States.

Here is a list of the seven most common types of falcons in North America:

Falcons are birds of prey that can be found around the world. They live in many habitats and eat rodents, reptiles, and insects as well as other birds.

Because falcons catch their prey with speed and agility, they tend to have long wings compared to their body length.

Many falcon species can be found in the United States, all of which were named after the birds from other parts of the world.

What Is the Rarest Falcon?

The grey falcon is the rarest falcon. Grey falcons are considered vulnerable because of habitat loss, hunting, trapping, poisoning, and electrocution. These causes have significantly decreased the number of grey falcons in their native habitats.

What Is the Most Common Falcon?

The American kestrel is the most common falcon in North America.

Are Falcons a Type of Hawk?

Many people wonder if Falcons are indeed Hawks, and the answer to this question is no. Falcons are different from hawks in that they have shorter wings and longer tails, traits that help them maneuver better when flying through thick brush or woodland areas where they typically live.

Which Falcon Is the Fastest?

The fastest falcon is the Peregrine falcon. This species can reach 240 mph when diving, which is faster than any other animal on planet earth.