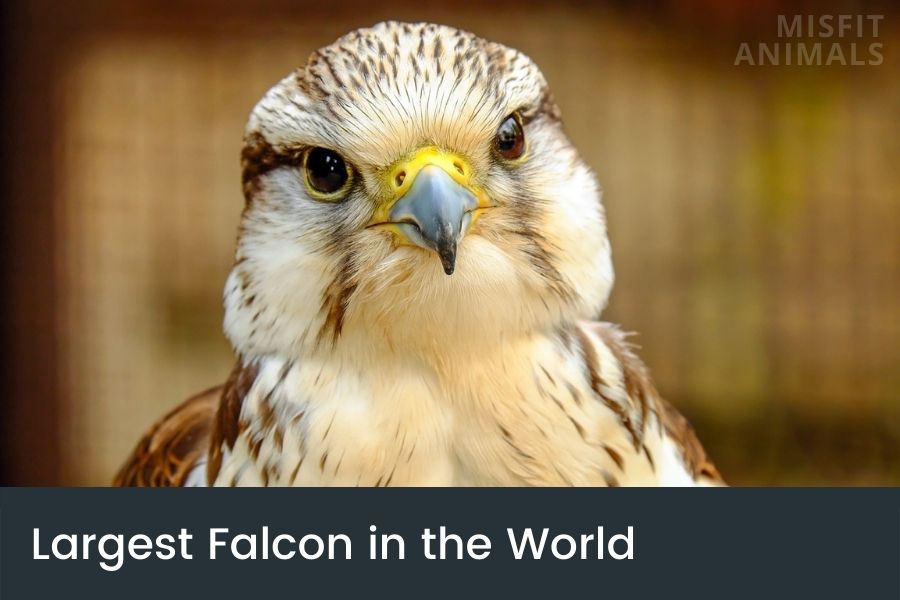 The largest falcon in the world is the gyrfalcon. This falcon can grow to be 25 inches long, with a wingspan of 63 inches. They eat bigger prey, due to their large sizes, such as rabbits and ptarmigan.

Have you ever seen a large, white bird with a long tail and wings? If so, you may have been looking at a Gyrfalcon, the largest falcon in the world.

These birds are impressive creatures, and they can be found in cold climates all over the world.

In this article, we’ll provide you with information such as size, wingspan, where to find them, and more.

An Overview of the Gyrfalcon

(Include Table of Size, Wingspan, and Other Related Traits)

What Is the Gyrfalcon?

The Gyrfalcon is a large falcon within the Falco order. These birds of prey breed on Arctic coasts and tundra. Their coloration is diverse, ranging from all-white to dark brown.

The largest falcon is the Gyrfalcon. It is a bird that belongs to the Family Falconidae which includes Falcons and Caracaras[1].

Falcons are birds of prey with pointed wings and long tails. Their flight feathers are stiff and curved, allowing them to turn quickly and dive on prey. They hunt small birds and rodents such as mice, but they will also eat larger birds such as ducks and even cranes.

As mentioned, the largest falcon is the Gyrfalcon. The females of the species are larger and bulkier. These are 20 to 25.5 inches long, with a 49 to 63-inch wingspan.

Meanwhile, male gyrfalcons can reach at least 19 to 24 inches long. It also has a wingspan of up to 63 inches.

Where Does the Gyrfalcon Live?

The Gyrfalcon often live in the mountains and high arctic tundra[2]. They may be more dispersed after breeding season and during migratory periods.

Most gyrfalcons spend their entire life in the far north. Only the northernmost individuals are migratory.

These are solitary animals, except during mating[3]. This takes place between February and March. They choose their specific mate for life and spend the majority of these months together to strengthen their bond before separating.

What Does the Gyrfalcon Eat?

Gyrfalcons eat rodents, birds, and small mammals. As a species, they are amazing hunters known to take prey as large as geese. This is driven mostly by instinct rather than the choice of food.

Gyrfalcons are only found in the far north. Specifically, they prefer to live on arctic plains where they hunt ptarmigans and waterfowl[3].

Falcons are carnivores and hunt their prey by striking them mid-air. They usually catch smaller birds but will occasionally catch larger game like rabbits or ducks.

Falcons vary in size and there are many different species of falcons. Let’s take a look at a few of the most common falcons and their sizes compared to the gyrfalcon.

Related: Types of Falcons: Here Are the Most Common

Falcons are found across all continents except for Antarctica. The peregrine falcon is known to be the most widespread of all raptors, living on every continent besides Antarctica.

Many falcons tend to display sexual dimorphism, which is a physical difference between males and females of the species. The peregrine falcon has very distinctive coloring with slate grey feathers on the top and white ones underneath.

The gray falcon is a medium size bird of prey. Its coloration allows it to camouflage easily in its habitat. Its range covers most of Africa and surrounding island countries.

It lives mainly on mammals, supplemented by birds and reptiles. Its diet consists mainly of rodents, bats, small monkeys, geckos, birds, and other small animals.

The American Kestrel Falcon is one of the smallest North American falcons. Adults are between 9-12 inches in length with a wingspan of 21 inches. The tail is long and square. It has black spots on its back which act as camouflage when it hunts prey.

This is a very common raptor all across North America. It nests in natural or man-made cavities. It hunts insects, snakes, lizards, small rodents, and small birds.

Being a symbol for many Native American tribes, the falcon is well-integrated into Native American culture. They believed that the bird was a messenger between themselves and their god(s).

The Red-Necked Falcon is a medium-sized bird that lives in the savannas and open woodlands throughout Africa. Their average size is 12-14 inches (30–36) cm in length with a wingspan of 33 inches (85 cm). Like many other falcons, they have short necks and legs.

The Red-Necked Falcon is a part of the order Falconiformes and the bird family Falconidae, which consists of diurnal birds such as falcons and caracaras that hunt for prey in flight.

Because the Red-Necked Falcon hunts for prey as it flies, it has superb vision and can spot potential food from a great distance. They use their sharp eyesight to catch birds that are flying, lizards that are running around on the ground, and even insects like locusts.

The Prarie Falcon (Falco Mexicanus) is a medium-sized raptor of the Falconidae family that lives on prairies and grasslands. The average length of 16 inches (40 cm), with a wingspan of approximately 40 inches (1 meter), and an average weight of 1.6 pounds (720 grams).

Prairie Falcons tend to fly and soar in the sky by using thermal currents.  They can dive at speeds of 100 mph.

Their main prey is rodents such as mice. The male and female Prairie Falcon will work together to hunt prey.

By using their incredible speed, they can dive to catch small mammals with pinpoint accuracy.

The gyrfalcon is the largest falcon in the world and can be found throughout northern regions of Asia, Europe, and North America. With a wingspan that reaches up to 63 inches, this species has been known to prey on large birds such as geese or gulls.