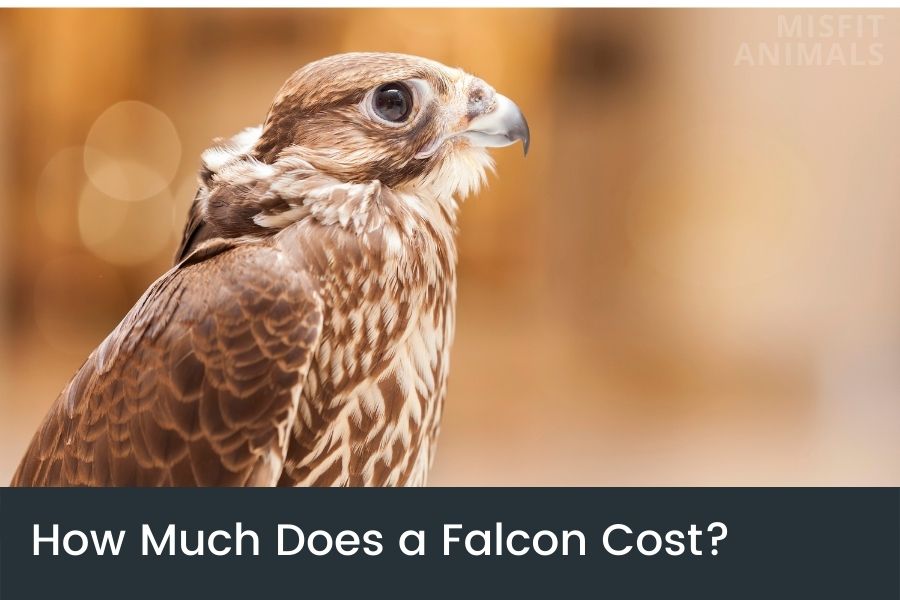 A falcon costs between $200 and $2,000 depending on the species. The price can get as high as $10,000. It largely depends on species, but also the amount of training the falcon has received.

Have you ever wondered how much a falcon costs?

Many bird watchers and enthusiasts are curious about the price of these beautiful creatures, as well as what it takes to keep them.

In this blog post, we’ll take a look at the buying price and upkeep of falcons.

So, how much does a falcon cost? Keep reading to find out!

How Much Does a Falcon Cost? (Average Price)

Falcons are birds in the Falconidae family. These birds are used by falconers (hunters certified to use birds of prey) to hunt.

But what is the price tag on one of these exotic pets?

This is largely a question of species, but also training. Pre-trained falcons are more expensive, as a falconer has already spent time curating the bird.

Let’s take a closer look at the most common falcon species and the price point of these.

You can check out the price of these birds yourself on various bird-trading websites, such as this one.

The red-tailed falcon’s average cost is about $400. This falcon is a medium-sized bird of prey. It is reddish-brown on the back and tail, with pale underbellies.

If you are looking for how much does a kestrel cost, they will probably set you back about $700-800.

A falcon, or a small bird of prey that moves quickly and captures its prey by using its sharp talons, is a fascinating pet to have. In specific, the American kestrel is known as a very friendly falcon.

These are often used by beginner falconers, as they’re easier to handle.

Falcons are very expensive and rare pets because they take such a long time for them to tame.

Day-old prairie falcons are very inexpensive but as the bird gets older, the price will increase until they reach their full potential at around four years of age.

A Gyrfalcon can cost anywhere from $1500 to $20,000. The price of the bird depends on how rare it is and how much money you are willing to spend.

These falcons are the largest of all, hence the steep price point.

The most expensive falcons ever sold was a gyrfalcon, at around $450,000.

A white Gyrfalcon was sold for $465,000[1]. The Gyrfalcon is the most expensive falcon. It can live up to 30 years and is native to Arctic regions such as Alaska and Greenland.

The buyer of the white Gyrfalcon was anonymous. But it is known that he is an avid falconer and works in the Middle East.

Costs of Owning a Falcon

Owning a bird of prey, specifically a falcon, is an expensive hobby with the price for such a bird ranging from $200 to $2,000.

Then you have running costs, which include:

Let’s take a look at a few primary costs of owning a falcon.

The primary cost to keep falcons is food. Although falcons can kill their own prey, falconers typically feed their birds themselves.[2]

The majority of falcon owners ensure that their bird gets all of its nutritional needs met by feeding it pre-killed prey, rather than by hunting itself.

Falcons with larger talons eat larger prey, which usually consists of chickens, quails, or even small turkeys. The typical falcon eats about 6-7 pounds of food per week at the cost of $200-$300 per year.

If falcons are to be kept at home, they must have a place to stay warm in the winter, cool in the summer, dry during rainstorms, and safe from other animals.

Different forms of shelter can include an outdoor aviary or an indoor cage.

These can be very expensive depending on how large they are and how much extra room for toys or perches is included. Falcons can’t stay in small bird cages. They need an aviary.

This can cost between $40 to build yourself to $1000 if you want to buy a pre-made aviary (or really what you’re willing to spend).

In addition to a place to stay, falcons also need several pieces of equipment:

Most falconers recommend that you use a decoy to train your raptor how to prey on the game. If you’re just starting out and feel like trying it with an actual animal, you can expect this training process to take about two weeks.

The health of your bird can dramatically affect the cost of owning a falcon. The best way to keep your bird healthy is to take them to an avian veterinarian whenever they show signs of being sick or if you have any concerns about their health.

Additionally, you can give your falcon various supplements to make sure they get their needed nutrients. The average cost is $3 per day.

Both general health and supplements are important in keeping a falcon healthy, but not all birds need certain supplements or can be put on diets that affect their weight.

Speak with your veterinarian before beginning any kind of diet or supplement.

Falcons are susceptible to various diseases[3]. They may also get injured. Whenever this happens, you have to see a specialized veterinarian, which will cost you about $100 per falcon every 4 months or so.

They are also vulnerable to parasites, such as lice and mites, which must be combated via topical or oral medication.

It is essential to have a veterinarian that has experience with falcons in order to treat them, as there are different medications and dosages for birds of prey than for other types of animals.

Can You Own a Pet Falcon?

You can own a pet falcon if you have a falconry license. It’s illegal to possess birds of prey without necessary permits.

Falconry is the art of hunting with a bird of prey. Falconry has been practiced for centuries, however, there are some regulations.

It is legal to own a raptor as a pet if you have a proper falconer’s license. However, pet ownership comes with several risks and responsibilities that should be considered before obtaining any form of pet.

Falconer certification costs about $800 in total. To become a falconer, an applicant must submit a total of 80 hours of documented experience in the field, including handling and training a falcon for a minimum of 20 hours.[4]

Applicants must also have two endorsements from previous or current state or federally permitted raptor handlers.

A written test is administered by the Falconry Certification Committee and must be passed before an applicant can become a falconer.

Falcons can cost anywhere from $200 to $2,000 for most species, while select species can cost more than $10,000. Additionally, there are costs of food, equipment, certificates, licenses, and more.