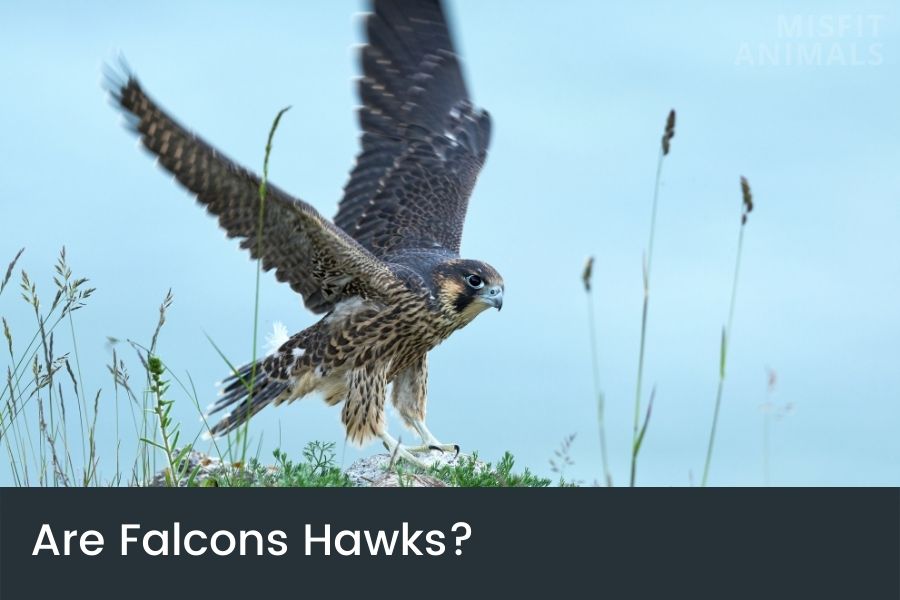 Falcons are not hawks, though they are distantly related. Both are birds of prey, and both are smaller in size, but they are definitely different animals.

There’s a lot of confusion about birds. Mostly because of their many categories, taxonomies, species, and so on.

Hence, a question has arisen: are falcons hawks, or not?

Falcons are sometimes referred to as hawks, and vice versa, but are the two animals the same? Or are they different? Or what is the difference?

In this article, we’ll clear up the confusion and take a closer look at the differences between falcons and hawks.

Falcons are related to hawks, but they aren’t the same thing. Falcons are part of the order known as Falconiformes, which only includes falcons.

Hawks belong to Accipitriformes, which are birds of prey such as hawks, vultures, eagles, and others. Falcons are part of their own order, the Falconiformes (also known as the Falcon order).

Hence, falcons are not hawks, but their own species that has its own order.

The genus known as “Falco”, a genus within the Falconiformes, is known as true falcons.

Hawks are commonly mistaken for falcons, but the two are not the same. Falcons are a separate genus from hawks and are part of a different biological order.

Falcons are found around the world, mostly in temperate regions. There are 47 species of falcons in 13 genera. Hawks are also found worldwide but are much more diverse than falcons with 57 extant species in 19 genera.

Are Falcons Related to Hawks?

Falcons and hawks are both birds of prey, but that’s about it. Falcons are more related to parrots than to hawks.

Falcons are birds of prey, belonging to the class Aves and the biological order Falconiformes. Hawks are also birds of prey, members of the family Accipitridae in the order Accipitriformes.

Falcons are known to be bolder than other types of hawks, which explains why they survive well in urban environments. While falcons are almost exclusively carnivorous, eating mostly smaller birds and mammals, the diet of hawks are much broader.

The order Accipitriformes is a diverse group of birds consisting of 2.5% of all species within the Aves class (birds). There are at least 266 species split among four families.

Accipitriformes can be found globally, distributed across every continent except for Antarctica, with some notable examples including African fish eagles.[1]

Accipitriformes are united by their reliance on speed and surprise when hunting their prey; they are characterized by short wings relative to body size, sharply curved talons, and hooked bills.

A significant number of species are sexually dimorphic, meaning there are visible differences between genders that are not directly related to their reproductive role. The most common of these differences are the color and size of plumage.

Accipitriformes is a relatively young order, emerging around 65 million years ago during the Paleocene epoch.[2]

The members of this class are characterized by their adaptation to an aerial lifestyle; as such, they possess features such as long wings and tail feathers. They are also known for hunting during the day.

The earliest fossils are Avisauridae (characterized by claws on their wings) are from the Eocene epoch which is around 50-60 million years ago.

The Falconiformes order is also known as falcons. It’s a group of birds that are characterized by having hooked bills and long wings. Their feet are adapted to perching, rather than walking or running on the ground; their wings are also typically shorter than those of other bird species.

There are around 60 species within this class, which includes diurnal (active during the daytime) falcons.[2]

The family is divided into three subfamilies:

The suborder Falcones are characterized by having strong curved talons that are adapted to hunting smaller animals. These are known as “true falcons”.

The subgroup is believed to have evolved during the Eocene Epoch, 50 to 35 million years ago. They are thought to be closely related to the extinct dinosaurs.

Main Differences Between Falcons and Hawks

Many people are not quite sure where the exact differences are between falcons and hawks, which is understandable. The two animals do look very much alike.

However, there are some distinct differences.

Size is one of the main differences between falcons and hawks. Falcon are smaller birds than hawks are.

The biggest falcon, the gyrfalcon, reaches an average length of 17 inches with a wingspan of up to four feet.

Hawks are larger birds. Red-tailed hawks are between 20 and 27 inches long with a wingspan of up to 4.5 feet.

Wings are very important in the flight of birds. Hawks and falcons are differentiated both in length and shape of their wings.

Falcons are smaller than hawks. They are fast, sleek, and agile fliers. Falcons’ wings are built for speed whereas a hawk uses its larger body to glide through the air.

The most notable difference between falcons and hawks is their primary method of flying. Hawks are known for soaring on thermals, gliding with minimal effort, while falcons typically fly when hunting, diving with incredible speeds.

The peregrine falcon, which is the fastest of all animals, can reach up to 240 mph, whereas the fastest hawk can fly 120 mph.

Falcons are capable of flying extremely fast and are agile in the air. On the other hand, hawks are much better at soaring for a long time.

Do Hawks & Falcons Prey on Each Other?

Falcons and hawks of comparable sizes, such as the gyrfalcon and red-tailed hawk, tend to avoid one another – they rarely target each other as prey.

The same goes for similar-sized predators of different raptor families, such as the eagle and osprey.

There are some key differences, including size, flight style, and wing type.

Are Falcons Related to Eagles?

Are Falcons Bigger Than Hawks?

Falcons are considered to be smaller than hawks. Falcons typically weigh less than 3 pounds while hawks can weigh more than 3 pounds. There does not appear to be much difference in the two animals when looking at them side by side, but falcons do tend to have larger feet and longer wings than hawks.

Are Falcons Related to Parrots?