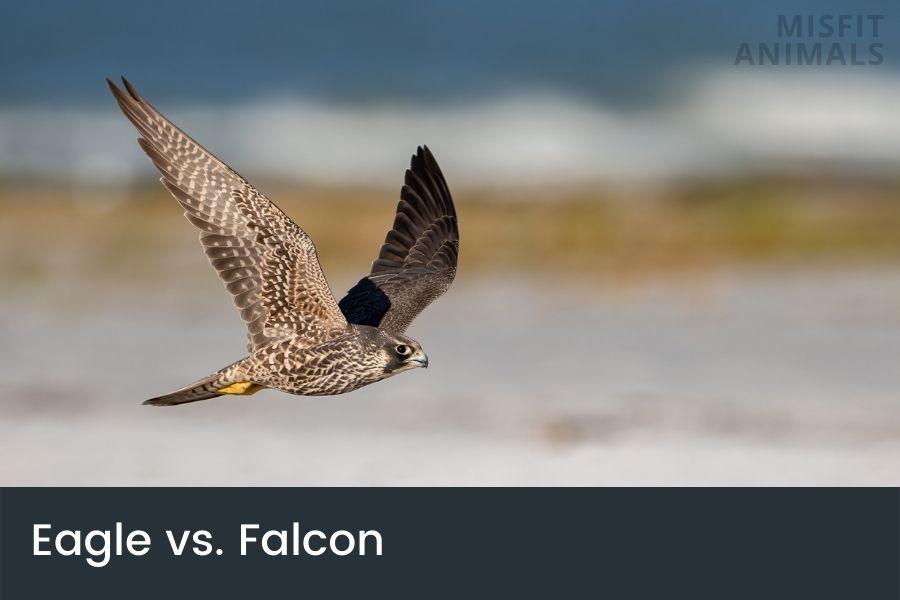 The main difference between eagles and falcons is their size. Eagles are large birds of prey, while falcons are smaller in size. Apart from size, they also have some behavioral differences.

Do you know the difference between an eagle and a falcon?

Most people think they are just different names for the same type of bird, but there are actually some key differences between these raptors.

In this article, we’ll take a look at the main differences and similarities between eagles and falcons so that you can identify them correctly the next time you see one.

The eagle and the falcon are both birds of prey, known for their ability to hunt, but how do they compare?

Here’s an overview of the main differences.

Taxonomy is the study of how living things are classified and organized into groups.

Eagles are much larger., heavier, and stronger creatures compared to falcons. This results in different behavior, such as the targeting of different prey animals.

Falcons range between 6 to 24 inches in length, which is much smaller than eagles that measure between 36 to 43 inches long.

Simultaneously, eagles have an average wingspan of 78 inches wingspan (a golden eagle can have a wingspan of 84 inches), while falcons range between 30 to 47 inches (74 to 120 cm).

The American bald eagle is the largest eagle in North America, weighing up to 20 pounds (9 kg) with a wingspan of up to 7 feet (2 m).

A female eagle can weigh as much as 13 pounds which is more than two times the weight of an equally sized male eagle, whereas falcons only weigh 0.5-3 pounds.

Falcons are slimmer than eagles, with pointy feathers on their wings. They have thin, tapered wings, which enable them to fly at high speed and change direction rapidly.

Eagles have long and wide wings, which help them soar through the sky without much effort. Their wings have rounded edges, contrary to those of falcons.

Both animals have hooked, sharp bills, which they use to tear flesh apart, or even to kill prey.

An eagle is a bird of prey in the Accipitridae family. It typically hunts in habitats like forest lowlands and mid-elevations. In contrast, falcons can live in grasslands, deserts, or arctic tundras.

In terms of flight ranges, eagles tend to soar on thermals, while falcons often use updrafts near cliffs or mountain ridges to gain altitude. While eagles situate themselves in the forest lowlands and mid-elevation, falcons mostly fly at high altitudes.

Both eagles and falcons are fast flyers, but falcons are the fastest. They can reach up to 240 mph when diving, whereas eagles can reach 200 mph.

Falcons tend to cruise while scouting, though they can dive rapidly onto prey from high altitudes when they spot prey. The falcon’s average cruising speed is 50 mph (80 kph), though when diving towards prey can reach 240 mph (390 kph).

The peregrine falcon is the fastest animal in the world.

Eagles and falcons are both birds of prey, but they’re quite different in their hunting techniques.

Eagles, sometimes referred to as “Old World” raptors, kill their prey using their strong feet and talons. They typically catch their prey mid-air.

Falcons, or “New World” raptors, use their bright eyesight to find prey items before swooping in for the kill. Falcons, such as peregrine and prairie falcons, catch prey items in flight or on the ground.

Migration is a specific type of journey undertaken by animals. There are many types of migration; some animals migrate multiple times throughout the year, and others only do so once during their lifetimes.

This type of movement is closely tied to survival: migrating allows animals such as birds to travel great distances in search of more desirable living conditions (for example food and shelter).[2]

In North America, most eagles migrate south in the winter months to escape harsh weather conditions[3].

Some types of falcons also migrate during certain times of the year.

Both animals can stay in the same area all year round if the conditions are right.

Falcons, including the Peregrine Falcon, are protected species. They are considered to be of least concern by IUCN standards.[4]

Most eagles, including the bald eagle, are also listed as “Least Concerned”[5].

Both falcons and eagles have seen a rise in numbers, though it does depend on the species.

Eagles and Falcons share many similarities. They’re both birds of prey, meaning they hunt for food, and they only eat meat.

Eagles have very strong eyesight which helps them while hunting for their prey. Their sharp, hooked beak and talons help them hold on to their prey while they eat it.

The falcon uses these same hunting skills to catch its food.

Let’s further understand the similarities between the two.

Birds of prey are predatory birds. There are many species of bird of prey, including eagles, hawks, owls, and falcons.

Eagles and Falcons share a few characteristics in terms of appearance, habitat, hunting style, and other behaviors. They both have sharp talons that they use for catching prey, hooked beaks that they use to tear food apart before they eat it, and powerful wings that they use to fly.

These predatory birds can generally be split into two groups:

Eagles usually eat larger animals like chickens, ducks, medium-sized mammals, or medium-sized birds (which they can steal from the ground or catch in the air).

Diet is perhaps one of the most important aspects of an animal’s life. It is what makes it possible to survive, and every animal has a unique diet that differs from others of its species.

Both falcons and eagles are carnivores. Their digestive system can’t process plants, hence they stick to the meat.

They can either eat live prey that they hunt themselves, or they can eat carrion, which is meat from already dead animals.

Which Is More Powerful: Eagle vs. Falcon

Eagles are both larger, heavier, and stronger than falcons. They also have bigger talons that can cause more damage in battle.

When it comes to raw power, eagles are the clear winner. It’s a simple question of size.

Their larger size, greater strength, and bigger claws, make them more powerful than falcons, however, falcons have one advantage: speed. The fastest animal alive in the world is a peregrine falcon, clocking in at over 200 mph (320 kph).

Although eagles appear to be stronger in battle, they may not be able to catch a falcon due to their heightened speed.

Yes, eagles do occasionally eat falcons, though they’re not the easiest prey to catch. Hence, eagles prefer other prey, such as fish.

Eagles are skilled hunters, but they’re also efficient. They mostly stick to preying on animals that they can easily catch. Falcons do not fall into this category.

The most common animals that eagles eat are:

No, falcons typically don’t eat eagles, though it does happen. The two birds are very rarely seen in conflict situations and eagles are much too powerful to be at risk from falcon attacks.

It has been observed that falcons feed on eagles. This mostly happens during scavenging though, where falcons get to eat off of the dead carcass of an eagle.

Falcon versus eagle clashes is mostly limited to territorial disputes or fights over food.

The biggest difference between falcons and eagles is their size. Eagles are larger, stronger, and heavier than falcons, which also leads to other behavioral differences.

As falcons are smaller, they also prey on small animals. Eagles, on the other hand, can prey on larger animals.

The two animals also differ in flight speed. While eagles are fast animals, falcons are faster, with the fastest animal in the world being the peregrine falcons.