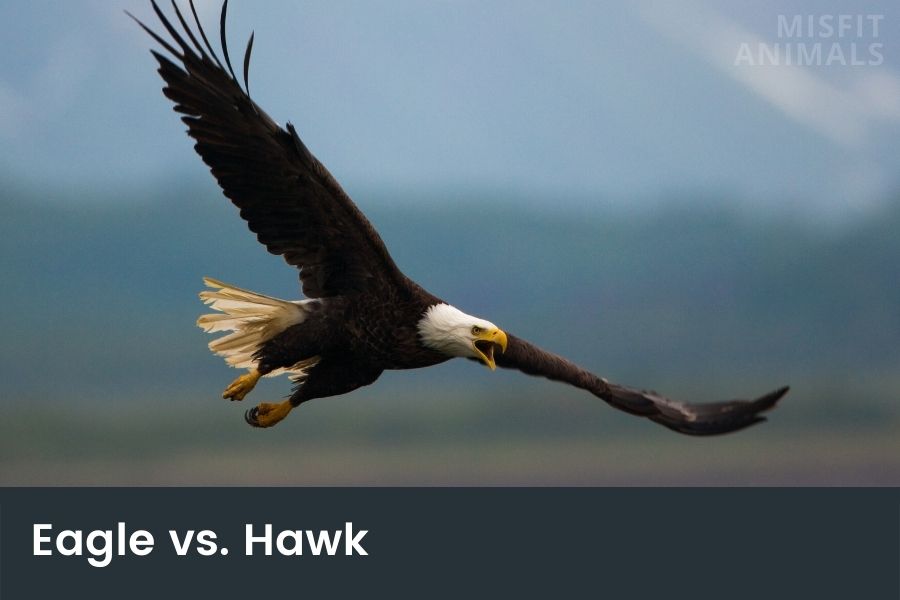 The main difference between eagles and hawks is their size. Eagles are much larger and weigh much more. Apart from that, they also have several other differences, such as color, wingspan, sounds, as well as behavioral differences.

When most people think of majestic birds of prey, they instantly think of eagles and hawks.

Both of these birds are incredibly fascinating and boast unique characteristics, but there are some key differences between them.

In this blog post, we’ll explore the main differences and similarities between eagles and hawks. We’ll also take a closer look at their habitats, diets, and hunting methods.

Overview of Eagle vs Hawk

Differences Between Eagles and Hawks

Eagles and hawks are very similar birds. However, there are some distinct differences between these two.

Here are some of the main differences between eagles and hawks:

Eagles and hawks are both raptors, meaning “bird of prey,” in the family Accipitridae. Within this family, eagles belong to Aquila or Circaetinae while hawks belong to the genus Buteo or Accipiter.[1]

In other words, depending on their genus, they often hunt slightly different and hunt different prey.

Eagles are larger and heavier than hawks. They have a greater wingspan, their bodies are long, and their weight can be up to 20 pounds, while hawks top out around 5 pounds.

Most eagles weigh about 7-14 pounds, depending on the species and individual[2]. Meanwhile, a hawk weighs between 1-3 pounds.

Hawks also have a larger wingspan and a greater body length.

Another key difference between eagles and hawks is their coloration. To be more specific, eagles tend to have golden and dark brown bodies and wings, while hawks are grayer or reddish-brown.

Eagles are often described as golden, blackish-gray and brown, while hawks tend to be Gray, reddish-brown, or rich brown.

Eagles are known for their great wings. They have long, broad wings that span up to 7 feet and 7 in (1.8  to 2.3 meters). Their wings help them fly at high speeds and soar over large areas.

Eagles have broad wings that are slightly curved on top because of the muscles they use to fly. Hawks have fully extended wings, with a sharp bend at the elbow.

This difference is most noticeable when eagle and hawk are soaring through the sky.

If you look closely, hawks’ feathers are typically slightly more rounded. Their tail feathers are also more broad and bulky.

Eagles and hawks are birds of prey that share many similar characteristics, but not their sounds. Eagles make a very distinct eagle noise (also known as an eagle scream), while hawks typically screech (hawks calls).

Both animals use their sounds to intimidate other birds of prey. They’re territorial and will fend off any intruders, starting with a scream or screech.

Related: Why Do Hawks Screech & What Do Hawk Calls Sound Like?

Both hawks and eagles are skilled hunters. Eagles are prone to hunting in the air. They grab their prey with their talons and carry it to the nearest perch. Hawks rely on the element of surprise, perching in trees until the time to strike.

When it comes to hunting, eagles and hawks are very skilled. They rely on their keen eyesight to spot prey, whereafter they attack.

Related: How Good Is a Hawk’s Vision?

Eagles are known to hunt in the air (when hunting for birds). They’ll fly up, attacking slow-flying birds from above.

The eagle then uses its sharp beak and powerful jaw muscles to rip the prey into pieces that can be consumed.

The hawk, on the other hand, swoops down from trees or high perches to catch prey in its talons. When they’ve killed their prey, they’ll either consume it right then and there or carry it somewhere.

Both birds of prey rely on their talons and claws to kill prey.

Eagles build nests very large, typically around six to eight feet in diameter and three to five feet deep. Hawks make smaller nests, usually about a foot or two in width and depth, created out of sticks, grasses, twigs, and vines.

Another difference between eagles and hawks is their respective mating behaviors during the breeding season.

Eagles often stick to their mate all year, while hawks live solitary lives until breeding season.

Similarities Between Eagles and Hawks

The main similarity between eagles and hawks is their hunting behavior, and their general build. They look very similar, except for size. They’re also both part of the Accipitridae family (diurnal birds of prey).

There are many similarities between eagles and hawks. Hawks and eagles both belong to the Accipitridae family, which consists of 200+ species of diurnal (active during the day) birds of prey.

For their size, both eagles and hawks have incredible power. They’re equipped with large powerful feet and hooked beaks that they use to capture their prey.

Let’s dive deeper into some of their similarities.

Both Are Birds of Prey

Eagles and hawks are both birds of prey, meaning they hunt other animals to eat[3].

Eagles tend to be bigger and stronger than hawks, allowing them to hunt larger animals.

Eagles and hawks, both classified in the family Accipitridae, are well-known birds of prey. As a result, both animals have hooked bills and sharp talons for hunting prey.

During a dive from the sky, an eagle or hawk swoops down quickly to catch its victim with its deadly talons.

Are Eagles and Hawks the Same?

No, hawks and eagles are not the same. While they’re part of the same family, they’re different species, with different physical and behavioral traits.

Diurnal birds of prey are all part of the Accipitridae family. However, this family is split into different genera.

There are many more subfamilies and genera in the Accipitridae family.

Who Is More Powerful Eagle or Hawk?

Eagles are more powerful than hawks. This is largely due to their size, as they are both larger, heavier, and have bigger talons and beaks.

Even though they share certain characteristics, eagles’ and hawks’ power comes from different sources and enables them to do different things.

Eagles have more raw power, while hawks are more agile.

Are Hawks Afraid of Eagles?

Yes, hawks are generally afraid of eagles. Eagles do occasionally prey on hawks, so it makes sense why hawks want to keep their distance.

The two animals may also be competitors in some areas, as they sometimes hunt the same animals.

Apart from eagles, hawks are also afraid of owls, and even crows.

Related: What Are Hawks Afraid Of?

Can a Hawk Beat an Eagle?

No, a hawk can’t beat an eagle. The eagle is simply too big for a single hawk to take down, even if it’s a small eagle. With an average weight of 7-14 pounds, small eagles are almost 1.5 times bigger than the biggest hawks.

If it came down to a fight, a hawk wouldn’t stand a chance. Eagles are both stronger, larger, heavier, and faster than hawks.

In all cases of an encounter, hawks would lose.

Do Eagles Prey on Hawks?

Eagles do occasionally prey on hawks, however, they don’t prefer to hunt hawks. They prefer to hunt for other birds or mammals that are easier to catch.

There are many differences between hawks and eagles. These birds have different habitats, body sizes, diets, life span lengths, nesting habits, hunting styles – the list goes on!

But despite their differences, they also share some similarities. They’re both of the family Accipitridae (diurnal birds of prey).