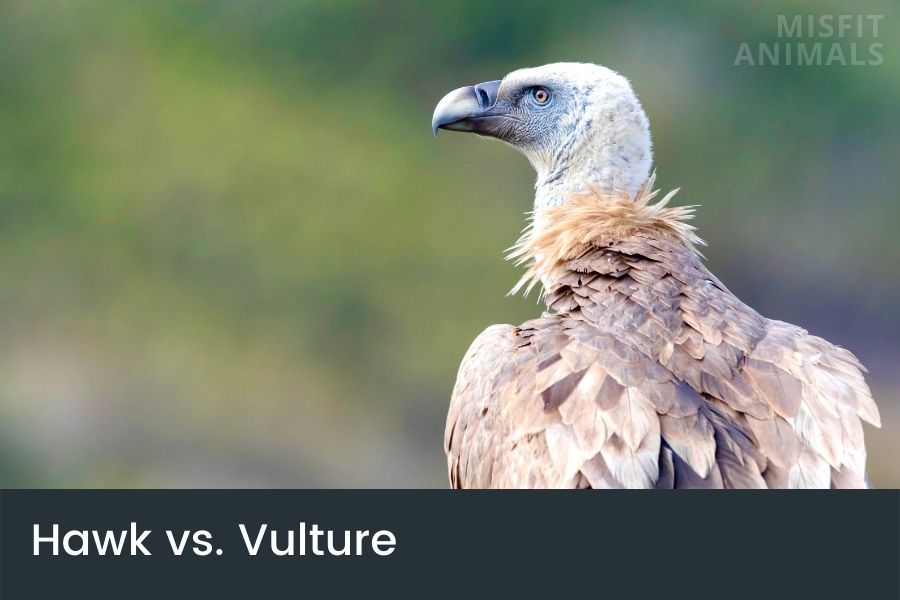 The main differences between hawks and vultures are their size, the animals they prey on, preferred habitat, and social behaviors. Vultures are generally bigger and hence prey on bigger animals. They’re also purely scavengers, feeding on carrion meat, whereas hawks hunt for prey.

Hawks and vultures may look very similar, but there are key differences between these two birds.

In this blog post, we’ll take a closer look at the similarities and differences between hawks and vultures, as well as how to tell them apart.

We’ll also discuss some of the unique behaviors of each bird. So whether you’re a hawk or vulture enthusiast, or just want to learn more about these interesting birds, read on.

How to Tell the Difference Between a Hawk and a Vulture

Some of the differences between hawks and vultures include their size, feathers, colors, and their heads. Vultures are bigger than hawks with shorter rounded tails while hawks have long feathers on their head and tails.

Hawks and vultures don’t look very similar, apart from their bird-like structure (they are both birds afterall).

You can tell the difference between these two birds by looking at their:

However, some hawk species have some bright colors on them while vulture species do not.

Differences Between Hawks and Vultures

Hawks and vultures are both birds of prey. They’re distinct types of birds that can be distinguished primarily by their appearance.

Hawks have long tails and slender bodies with sharp wings used for catching prey in flight and diving fast, whereas vultures have broad wings and short tails suited to soaring through the air.

Hawks and vultures are both members of the Accipitridae family, but they each belong to two different genera (specific categories).

Hawks (such as red-tailed hawks and bald eagles) belong to the Accipitridae. There are more than 40 species within this genus. Vultures (including turkey vultures and black vultures) belong to the Cathartidae.[1]

Vultures are also more closely related to storks than hawks are.

In terms of appearance, hawks have slender bodies and shorter wings, while vultures are typically taller with longer wings. The biggest difference between the two is size. Vultures are much bigger than hawks. They also have long necks.

Hawks have powerful claws that they use to grab their prey and carry the meat. Vultures have strong feet instead, as they don’t need the claws to kill prey.

Hawks mainly prey on small mammals such as ground squirrels or chipmunks[2]. Because hawks have strong talons to attack their prey from midair, they are able to immobilize them quickly.

Hawks have very good eyesight to be able to spot their prey from great distances.

While vultures do prey on small mammals, they exclusively target already dead animals for food. They’re among the best-known scavengers.

Because of this, vultures have great eyesight, but also depend on their sense of smell to be able to locate dead bodies from hundreds of meters away.

Related: How Do Hawks Kill Their Prey?

Hawks and vultures prefer different locations and habitats, but can be found in many of the same, such as deserts, wastelands, and open landscapes.

Hawks are commonly found on the edge of forests or fields, while vultures prefer to nest in places of open country, where they can soar and scout far and wide.

Both types of birds rely heavily on good eyesight to find their prey. The difference in habitat preference comes down to their diet. Vultures only eat carrion, so they prefer open land where it’s easier to find dead animals. Hawks hunt live animals, which are easier to find in places of vegetation.

Vultures gather in groups called “committees”. Committees can contain up to 30 members. When they fly, they’re called “a kettle of vultures”, similarly to “a kettle of hawks”.

Similarities Between Hawks and Vultures

Both birds play very important roles in their natural habitats and have been known to be of great help in certain cases. They are also interesting creatures that can be studied to understand the intricacies of nature.

Let’s learn more about their similarities as we go further.

Vultures and hawks eat carrion (dead animals)[3]. However, vultures only eat carrion, while hawks supplement their hunting with scavenging.

The word “carrion” comes from the Latin word for corpse. Carrion may seem like an inappropriate source of food, but it is very nutritious. Carrion can also provide a valuable source of food for carnivorous animals when other sources are low in supply.

Besides that, scavengers are vital to the ecosystem. As dead animals are eaten, the nutrients and energy is recycled back into nature, resulting in vegetation growth.

Many carnivorous birds have a few things in common: strong feet, talons, and beaks.

Both hawks and vultures have sharp, hooked beaks used to tear through flesh. They both have powerful talons for gripping their prey. As vultures aren’t birds of prey, their talons aren’t as big, but their feet are still incredibly strong.

As for their beaks, they use them to tear apart flesh, which they either eat or feed to their offspring.

Hawks typically don’t eat vultures, as they’re too big to hunt. The only time a hawk would eat a vulture, is if it were dead.

In natural environments, hawks and vultures have a complicated relationship. Hawks hunt and eat many of the same small animals as vultures do (rats, mice, snakes), they also eat other birds and mammals (both live and already dead).

Vultures, on the other hand, stick with dead animals.

Although hawks and vultures have a complicated relationship, they do not typically hunt each other in the wild.

Related: Do Hawks Eat Birds & Which Ones?

Hawks don’t chase vultures. Hawks are predators that prey on live animals, especially birds. However, they stick to small birds, as vultures, or similarly large birds such as eagles, could kill them.

The two species have an interesting dynamic. Most of the time they seem to coexist in peace.

Hawks can however choose to mob vultures, but only when they’re in a larger group.

Are Vultures Afraid of Hawks?

Yes, but only in particular instances. Vultures tend to keep their distance from birds of prey, such as hawks, eagles, and owls. They’re also afraid of hawk mobbing when a group of hawks harasses a vulture.

Although most hawks are smaller than vultures in size, they have ample weaponry to decimate their aerial foes if need be.

Vultures eat hawks, but only after they’ve already perished. There are some instances where vultures eat live prey, though this is rare.

The large vulture is a scavenger. It doesn’t kill itself but allows animals to drop dead before feasting.

When they find a dead animal, they’ll remove bacteria and eat the carcass before it decays. This includes hawks, as well as bigger animals.

Do Hawks and Vultures Fight

Vultures and hawks typically don’t fight, as they tend to keep their distance. However, it has been known for them to fight over food sources.

One possible reason for conflict between these birds is competition over food sources. This may be more likely to happen during mating season as the vultures and hawks will be foraging for a lot of food to bring back to their young.

This is especially true if they are nesting in close proximity to one another.

So what’s the difference between hawks and vultures? Hawks are smaller than vultures, they’re more slender, have feathers that come to a point, and range in color from light brown to dark brown.

Vultures are typically larger than hawks, have rounded feathers, and are black or very dark brown. Additionally, hawks have narrower heads while vultures have broader heads.