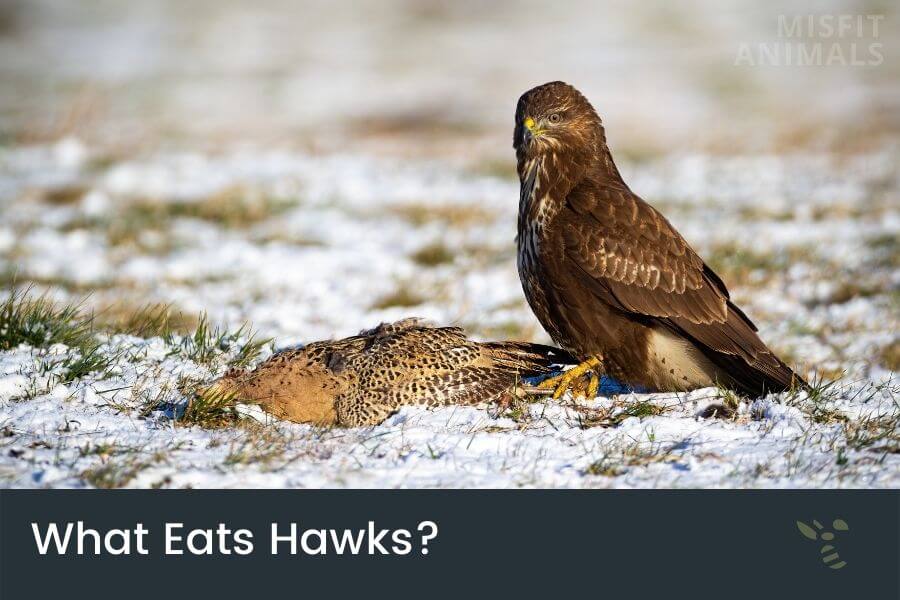 Hawks have many natural enemies including other birds of prey (owls, eagles, and hawks), or land-based predators (coyotes, wolves, and foxes). These are all animals that eat hawks.

While some people may think of hawks as powerful apex predators, the fact is that they are eaten and attacked by other animals.

In this blog post, we’ll take a look at 8 natural predators of hawks.

These are the eight most common animals that eat hawks:

Let’s get into it.

While hawks themselves are predators, meaning that they eat other animals, they’re also preyed upon.

Let’s take a closer look at a few animals that eat hawks.

Owls are the primary predators of hawks. They’re great predators themselves, and larger than hawks, meaning they have no issue taking them down.[1]

In particular, Great Horned Owls and Snowy Owls hunt down these majestic birds of prey. These owls are large enough to eat even large hawks.

The main difference between owls and hawks is their daily activity pattern. Owls hunt at night, whereas hawks hunt in the day. Hence, owls can surprise hawks when it’s dark.

Hawks are a great source of food for eagles. Eagles primarily eat mammals and birds, including other birds of prey, such as hawks.

Many people think of eagles, falcons, and hawks as one group. This is not true. Hawks are both competitors and prey of eagles.

The bald eagle, the most common of America’s eagles[2], prefers to eat fish but will settle for other birds if it’s the only available food. While they do this more commonly in colder months, when food is more scarce, eagles do prey on hawks all year round.

The raccoon is a mammal that lives in a variety of areas, including forests and near rivers.

Like most other animals, the raccoon must eat to survive. Its diet consists primarily of fish, frogs, and eggs – including hawk eggs.

The raccoons dine on the eggs of hawks, which they steal from nests. Occasionally the raccoon also eats small birds, but this is not common.

Raccoons climb trees to reach nests where they find bird eggs. Once it has found its way to a nest, the raccoon is able to reach inside and pull out the eggs.

Red foxes are predatory mammals, feeding on both prey they catch alive, and carrion meat (dead animals). Foxes are born hunters and have an incredibly stealthy nature.[3]

They stalk their prey and kill it with a pouncing motion, then carve off chunks to be shared with other red foxes.

While they have difficulty catching hawks, as hawks can simply fly away, they are great at sneaking. They’ll sneak up on a hawk and pounce on them. This is rather uncommon though.

Coyotes are scavengers by nature. They eat the remains of carcasses or other dead animals. Coyotes mostly feed on hawks that are already dead.

The coyote has a very powerful jaw, and its teeth can easily puncture through feathers and skin. While they can easily kill a hawk, they have difficulty catching them alive.

Snakes both eat hawks and hawk eggs, the latter being the most common. They will slither their way to a hawks’ nest and steal the eggs inside.

Hawks do what they can to keep their nests safe from snakes, such as building their nest in trees or hidden behind branches.

While hawks do engage in active nest defense, where they attack the snakes that are trying to steal their eggs, they aren’t always successful.

There is a pecking order among hawks, which mostly depends on size and strength. The larger hawks do occasionally prey on smaller hawks.

Many hawks primarily, or solely, feed on birds. If no songbirds, larger birds, or poultry is around, they may feed on other hawks.

These younger and weaker birds are more likely to be preyed upon by the larger predatory hawks. However, this behavior is uncommon.

Predators Depending on Habitat

Hawks live in a variety of habitats, and depending on where they live, they deal with different predators. Different threats lure in the desert compared to the forest.

Different habitats provide different threats for hawks. They are exposed to many predators depending on their environment.

Each habitat provides something unique which increases or decreases the chances of survival for hawks.

Related: What are hawks afraid of?

What Eats Hawks in the Desert?

In the desert, hawks are mostly exposed to coyotes or vultures. These two animals primarily scavenge, but will also prey on hawks.

As stated, hawks inhabit a variety of habitats, such as the desert. These are mostly hawks that belong to the genus Buteo, also known as “open-land” hunters.

They use the open land to their advantage, as it’s easier to spot prey. Unfortunately for them, it also makes them more visible to other predators.

Coyotes are one type of predator found in deserts[4]. The same goes for vultures.

While both animals tend to scavenge more than they hunt, they will occasionally hunt down prey as well.

What Eats Hawks in the Rainforest?

In the rainforest, hawks deal with predators such as other hawks, owls, and eagles. Rainforests are packed with vegetation, which makes it more difficult to escape a predator.

The four biggest predators found in the rainforest are:

The best-known predator of the hawk is the owl. Owls are nocturnal animals that hunt during the night and sleep during the day.

Eagles, who typically live near water, will also prey on hawks. The eagle is a bigger bird than the hawk, which gives it a competitive advantage.

Large cats, like jaguars, pumas, and ocelots, also hunt in rainforests. As they can climb trees, they can better hunt hawks compared to coyotes or wolves.

How Do Hawks Defend Themselves?

Hawks defend themselves with their sharp talons and beaks. They will claw their attackers, and use their beaks to inflict damage.

A hawk has sharp talons that are strong enough to cut into the flesh of almost any animal they encounter. Their beaks, which are just as sharp, are also used both as a defense and attack mechanism.

Aside from this, they’re also very fast. If attacked by land-based animals, they will try to fly away. However, if they’re attacked by an eagle, there is not much use in trying to fly away, as eagles are generally faster.

No, people do not eat hawks. There are many predators of hawks, but people are not one of them.

This indirect harm includes climate change and environmental change rather than direct interaction.

Climate change, environmental change, and destruction of habitat lead to worse living conditions, which leads to the death of many hawks.

For many predators, the destruction of habitat causes a great reduction in prey. It also results in less living space.

As hawks are predators, they suffer greatly from the loss of habitat: it takes away food and produces more enemies and competitors.

Through building, humans reduce the size of space available for prey animals to live on.

As a result, less food is available, and there’s longer between meals for hawks.

Birds depend heavily on their environment for food and shelter. As the climate changes, it forces many species to change their habitat or reproduce at an earlier age.

Many predators also have a harder time finding food.

Many hawks prey primarily on rodents. As people see rodents, such as mice and rats, as pests, they poison them.

This has an indirect effect on animals that prey on rodents, including hawks. A study done on red-tailed hawks revealed that 97% of the hawks tested positive for poison.[6]

Hawks can become poisoned in many different ways, including leaving poisoned meat in areas where hawks are seen regularly, or poisoning the animals they prey upon.

While hawks are birds of prey, they also have many natural enemies. Birds like eagles and owls will hunt them for food. Other predators include foxes, wolves, other hawks, and scavengers.

Depending on where a hawk lives, it has to deal with different predators. In forests, they are mainly preyed upon by other birds, while scavengers will hunt them in deserts.

While people don’t eat hawks, they still kill them indirectly. Through climate change, destruction of habitat, and indirect poisoning, people are responsible for the deaths of many hawks.