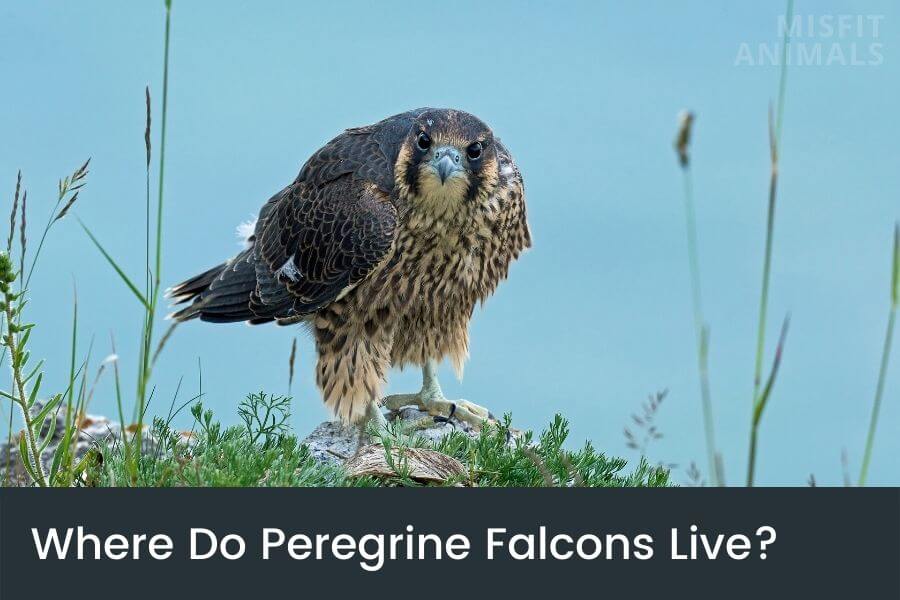 Peregrine falcons live in a variety of habitats, including forests, mountains, cities, rainforests, valleys, deserts, and others. They have a global presence, except for Antarctica.

Peregrine falcons are some of the most impressive birds in the world. They can reach speeds of up to 240 meters per hour while diving down on their prey, and they are known for their strength and agility.

But can you find this bird? Where do they live?

In this post, we will explore the habitats, nesting habits, and distribution of peregrine falcons. We will also discuss how you can help these amazing birds thrive.

Where Do Peregrine Falcons Live In the World?

Peregrine falcons are most common in North America, Eurasia, and Australia. They are less commonly found in the southern hemisphere where they inhabit Chile, New Zealand, Argentina, South Africa, and Antarctica.

These birds of prey prefer open habitats where prey is abundant. These habitats include coasts and grasslands where prey can be observed from above.

While this may be their preference, they can also be found in a variety of other habitats, including deserts, mountains, and forests.

Peregrine falcons hunt during the day in natural habitats where they often use cliffs and rock ledges to rest and lay eggs.

What Continents Do Peregrine Falcons Live In?

Peregrine falcons live in every continent except Antarctica[1]. They’re mostly found in North America, Australia, and Eurasia, while they have a smaller presence in South America and Africa.

In the Northern Hemisphere where most peregrine habitation occurs, they prefer cliffs where they build their nests.

In mountainous areas where there are few trees, peregrines may hunt their prey by perching on a high point and swooping down onto their unsuspecting prey below.

What Countries Do Peregrine Falcons Live In?

The peregrine falcon is found around the world in many different countries, including the US, Australia, Canada, Chile, Argentina, and many more.

Aside from living in forests and mountains in carious countries, peregrine falcons also live in cities.

One of its most notable habitats is in New York City[2]. The US has the biggest concentration of peregrine falcons with an estimated breeding population of 1,750 to 2,000 birds in 48 states.

This does not include Alaska where they breed on cliffs along the coastlines near water.

The peregrine falcon is also found throughout Europe where they breed on cliffs. The rocky landscapes are riddled with ravines that provide their prey with protection where they can escape from the dive-bombing falcons.

There are several other countries where peregrine falcons can be found. They can be seen throughout Africa where there is plenty of cliff habitat.

Small populations of the peregrine falcon also live throughout Asia where they breed in various places where the climate is suitable.

Where Is the Peregrine Falcon From?

The peregrine falcon is originally from the Northern Hemisphere, where it lives in temperate and subarctic regions. As of today, however, it can be found almost everywhere where there are suitable habitats for them.

This species has an extremely large range compared to other raptors because its preferred prey species can be found almost anywhere. They’re also prone to migrate long distances, which allows them to roam far and wide.

Some sources claim the peregrine falcons to be native to Australia[3], while others claim that it originates from Eurasia.[4]

What Habitat Do Peregrine Falcons Live In?

Peregrine falcons live in many habitats, from rainforests and forests to cities and valleys. They’re adaptable and can live in both tropic, subtropic, and temperate climates.

These medium-sized birds of prey primarily live in wide-open spaces where there is plenty of food. They usually lay their eggs on cliffs where the chicks can easily learn to fly.

There are four different types of peregrine falcon habitats:

Peregrines living near the ocean will eat crabs, fish, and other aquatic life[3].

Those living in rockier mountain regions where there are fewer plants near the ground hunt rabbits, deer mice, squirrels, birds that have worms or insects in their stomachs.

Peregrine falcons in cities, where people live, don’t have to fly great distances to find food. They commonly eat pigeons and ducks because these birds are fairly easy to catch. They don’t need to expend as much energy hunting them, which is a great advantage.

Why Is the Peregrine Falcon Endangered?

The peregrine falcon is not considered endangered. It was at one point, but due to regulations, they’re now thriving.

The peregrine falcon was marked as an endangered species in the 70s. Many environmental factors contributed to the decline of the species.

Since then, regulations and initiatives have resulted in an increase in the population, effectively removing their endangered status.[5]

Where Do Peregrine Falcons Migrate To?

Depending on where they are, the migration of these birds varies from year to year. Some species migrate to wintering grounds in central and South America.

Peregrine falcons are migratory birds. They’re known to fly up to 15,500 miles a year, which is quite a lot.

Like other birds, they’ll migrate southward during the winter, and return north for the spring, summer, and early fall.

Their specific migratory pattern is not straightforward as the species are divided into subspecies that have different patterns.

How Far Do Peregrine Falcons Migrate?

Peregrine falcons are known to migrate long distances every year where they travel up to 15,500 miles annually. They do need to stop once in a while, as they’re not as efficient at soaring as other birds.

Peregrine Falcons have been recorded migrating as far south as Peru during the winter. They are also known to migrate to the equator where they have been seen by scientists.

They are able to fly so far because of the unique physical characteristics that give them excellent flying abilities both in speed and maneuverability.

While they can fly far, they’re not as great at flying for long periods of time as other migratory birds.

Related: How Fast Are Falcons?

How Do Peregrine Falcons Nest?

Peregrine falcons don’t bring nesting material to their nesting ground. Instead, they use the materials around them, typically by scraping and pushing debris, dirt, leaves, sticks, and gravel together.

Where Do Peregrine Falcons Nest?

Peregrine falcons make their nests in high places where they cannot be easily disturbed or attacked by other animals. These can include on ledges of cliffs, in barns, on top of telephone poles, and even in the abandoned nests of crows or eagles.

The majority of peregrine falcons will build their nests on cliffs where there is a vertical drop. This enables them to dive down through the air where their natural prey is, which are birds.

The falcon will chase its prey until it catches one, where it will then place it in its talons, carry it back up into the air, and kill it by crushing its bones.

Peregrine falcons are among the most commonly found birds around the world. They can be seen in North America, Europe, Australia, and Central Asia.

They live in a variety of habitats, including forests, mountains, coastal regions, rainforests, and desets.