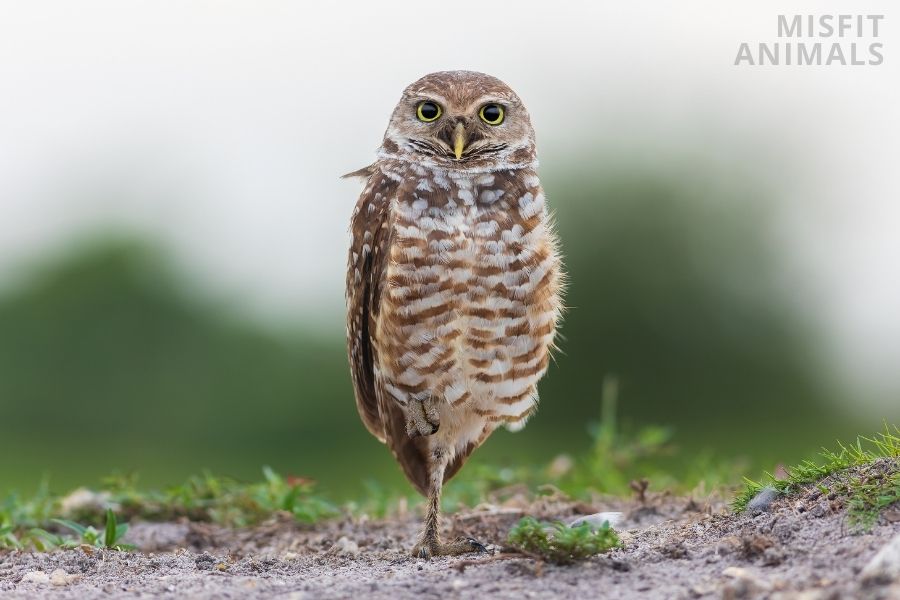 Burrowing owls are small, long-legged owls that primarily live in dry areas, such as rangelands, grasslands, and deserts. They get their name from their unique behavioral trait to burrow into the ground.

While they are not commonly seen by birders, those who know where to look can spot these intriguing birds perched on a power pole or shrub.

The burrowing owl is a small burrowing animal that lives in North American grasslands. They are active during the day and they tend to burrow their nests underground (hence burrowing).

The burrowing owl (Athene cunicularia) is one of nineteen living species within the genus Athene, part of the larger grouping of owls in the Strigidae family.

Burrowing owls have been historically linked with fossorial mammals such as prairie dogs (Cynomys sp.) which are endemic in North America.[1]

These animals were also found in the plains in South America. The burrowing owls use their burrows for nesting.

The burrowing owls most closely related are burrowing parrots, burrowing parakeets, and Mauritius scops-owls which all share similar physical features of the beak, body size, preferred habitat, and burrowing behavior.

Northern burrowing owls are found in western Canada and along the west coast of the United States from Washington to northern Mexico.

Desert burrowing owls are mainly sandy brown with black speckles on the chest and back. They have yellow eyes surrounded by orange-yellow facial disks. The burrowing owl has a gray bill with a darker gray tip, white eyebrows, and gray legs.

The burrowing owl has a large head, short tail, yellow eyes with vertical pupils that can rotate within their sockets, muscular legs, and broad wings. They have feathery bristles called plumicorns on their head, neck, and breast.

The burrowing owl’s feathers are mostly brown-gray in color with the underside of its wings being lighter in color. Their burrows are usually hidden by plants to help protect them from predators.[2]

Being small birds, only about seven to ten inches tall, they are often preyed upon by other animals. They’re not fast either, as their small wings can’t generate much power. This owl has developed longer legs, which enables it to sprint.

The burrowing owl is a grassland bird. It’s the only burrowing owl species in North America, and it has a striking appearance with white underparts and a black face mask. This owl lives throughout most of western Canada, throughout Mexico, and into the southwestern U.S.

In general, burrowing owls live in grasslands, deserts, and other open areas where burrowing animals are common. This habitat is usually interspersed with cultivated fields or pastureland, but not forests. Burrowing owls only burrow in soft dirt so they don’t burrow into hard soil or clay.

While burrowing owls do live in grasslands and deserts, they actually require a burrowing animal with which to build their burrow. Burrowing owls are commonly found around prairie dog colonies, but will also burrow near other burrowing animals such as badgers, ground squirrels, marmots, and armadillos.

Burrowing owls are also known as ‘digger owls’ because burrows abandoned by other animals are their preferred nest sites. They are mostly diurnal as their main activities take place during the day.

During courtship, burrowing owls will stand almost vertical on top of their burrow with wings spread wide and emit loud hooting calls for up to 3 hours. The burrowing owl’s burrow is usually just big enough for it to fit into and has 2 chambers: a nesting chamber and a roosting chamber.

The burrowing owl prefers to hunt small mammals and insects. They commonly prey and insects and other small animals that can fit in their mouth.

The borrowing has a wide range of prey[3], including:

They can fit small mammals in their oral cavity and swallow it whole. When swallowing bones, fur, and other hard-tissue elements they regurgitate them later.

Burrowing owls are hunted by various predators, including falcons, hawks, and other birds of prey. Wild and domesticated canines and felines also hunt these birds including weasels and badgers.

Towards the top of the list of burrowing owl predators are falcons. Hawks and other birds of prey also hunt burrowing owls for food.

During the burrowing owl life cycle, this bird starts out as an egg. These eggs are white and sometimes have a blue tint to them. An average of four eggs are laid by burrowing owls per clutch. The female burrowing owl incubates these eggs for about 28 days while the nestlings inside of the eggs mature.[3]

The final burrowing owl life cycle stage is adulthood, where these owls fly off to find a mate and start nesting or migrating.

The burrowing owl population size fluctuates throughout their range due to predation, habitat loss, and a number of other factors. The population has been estimated to include less than 10,000 burrowing owl breeding pairs.

The burrowing owl is listed as near threatened by the IUCN red list.

What Is a Burrowing Owl?

A burrowing owl is a small scurry-like bird that spends most of its time underground in burrows.

Burrowing owls can be aggressive if threatened. In many instances, the owls will aggressively protect that burrow from other predators that could attempt to steal from them or disrupt their home. Burrowing Owls are wild animals and can be unpredictable at times, but generally speaking, they are not aggressive towards humans.

How Fast Is a Burrowing Owl?

The average speed of a burrowing owl is anywhere from 20 to 30 miles per hour, with the maximum speed at 40 miles per hour. However, these owls can only uphold these speeds for a short period of time.