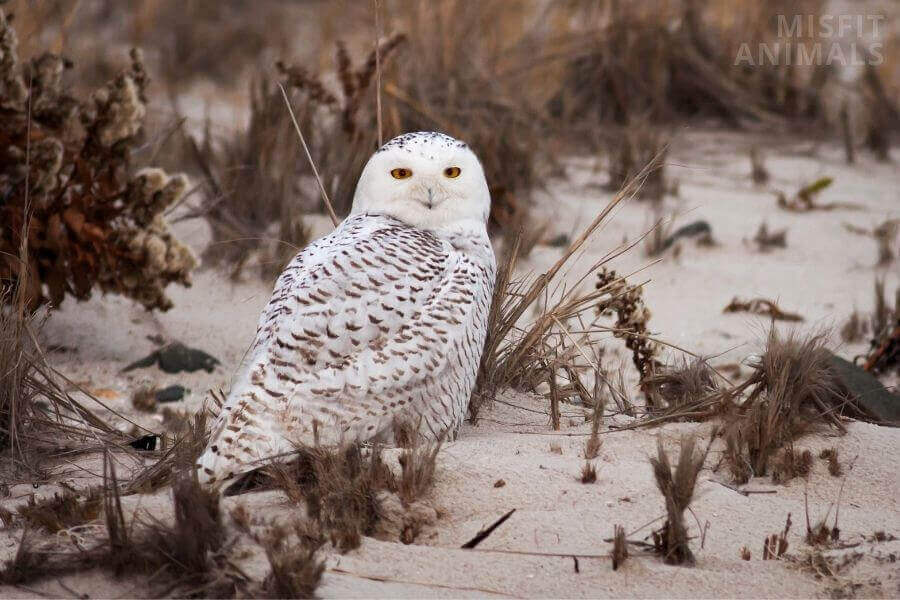 Snowy owls eat a variety of animals, but they most frequently feed on rodents, lemmings, seabirds, and other birds such as ducks. They’re carnivores, feeding only on meat.

So what do snowy owls eat, and how do they get their food?

In this article, we’ll discuss the diet of snowy owls, how they hunt for their food and the most common animals that snowy owls eat.

What Do Snowy Owls Eat?

Snowy owls mostly feed on rodents and birds, as these are the most abundant in the arctic regions. They do also feed on other small animals that they can find.

Most people think of snowy owls’ looks when the animal is mentioned. They are known for their pure white feathers, often referred to as “snow camouflage”.

However, what these gorgeous creatures eat is an often overlooked aspect of their complex biology.  Here’s what snowy owls eat.

Snowy owls mainly feed on rodents in the wild. There are several kinds including the following species:

Rodents comprises the majority of snowy owls’ diet in the wild.[1]

Snowy owls hunt rodents both by waiting on perches near trees or other popular hunting areas. When unsuspecting rodents venture near, the owl will swoop in for the kill.

Snowy owls are also frequent hunters of lemmings. These are small species of rodents that live in the arctic and subarctic regions. They are sometimes called “field mice of the north” because they look very similar to mice.

These are a few of the most generic descriptions to help you distinguish a lemming from other rodents.

Besides rodents, snowy owls also hunt for birds, including ducks. These are typically larger than other bird species and hence make for a good meal.

Snowy owls, like other birds of prey, hunt by grabbing their prey with their talons (feet). After they grab the prey animal in its claws, they will strike it over and over with its beak until it’s dead.

When hunting for ducks, owls can also choke their prey.

Besides ducks, owls also prey on other seabirds[3]. These particular birds live near or on the open ocean. Their size can vary depending on what type of bird it is.

Some types of seabirds include:

However, owls are opportunistic hunters. They don’t limit themselves to these animals and will eat whatever they can get their hands on.

Snowy Owl Diet Based on Region

Snowy owls don’t live in a single area. They’re spread out, and as such their diet changes.

What Do Snowy Birds Eat In the Wild?

In the wild, a snowy owls’ diet is primarily dependent on what animals are available. If rodents are abundant, it’s only natural for owls to feed more on these animals.

The answer can vary depending on what part of the world they reside in. For example, if a white-spotted owl lives near tundra or tundra-like conditions, it will eat rodents such as lemmings, voles, and occasionally rabbits.

If a snowy owl lives in the Arctic where sea mammal hunting is prevalent it will eat a variety of birds, eggs from seabirds, and mammals including ringed seal pups.

Sometimes they will also scavenge, eating whatever leftovers they can find from other animals or humans.

In the northern part of the UK, snowy owls were observed preying on leftovers from foxes and wolves that had killed sheep or cows.

Related: What do owls eat?

What Do Snowy Birds Eat In Captivity?

Snowy owls are carnivorous birds, meaning that they only eat meat. They have been known to hunt small mammals, hares, ptarmigan, and lemmings, and are fed many of the same animals in captivity.

These birds are mostly given a diet of mice and rats when living in captivity[4].

Snowy owls mostly live in captivity if they’ve been injured and cannot take care of themselves. They’re brought to a rehabilitation center, where they will be taught how to survive in the wild again before being released into their natural habitat.

Baby owls that have been abandoned are also taken into rehabilitation centers or wildlife sanctuaries.

What Do Baby Snowy Owls Eat?

Baby snowy owls, also called owlets, feed on whatever their parents bring them. These will be the same animals as what their parents feed on, simply chopped up into smaller pieces.

Snowy owls breed during the summer months and raise two to four eggs. The male owl brings food to the nest while the female incubates their eggs, which hatch into baby owls after 30 days.

When they hatch, the owlets’ diet can vary a lot, depending on the day and region. They eat what their parents bring back to the nest.

At first, the parents will regurgitate food for the owls to eat, however as they grow, they’ll move on to solid foods (they will be given small pieces of meat first and later whole prey).

When the prey is brought back to the nest, it will either be fed directly to the baby owl or stored on a branch nearby for later consumption.

How Much Do Snowy Owls Eat?

An average snowy owl may capture up to 7 to 12 mice per day. They’ve also been recorded eating three to five lemmings a day, or 1,600 a year.

Snowy owls can go days without eating, or they can eat up to 12 mice in a single day. When hunting for lemmings, which is also one of their preferred prey, they can eat between three and five a day, for a total of 1,600 a year.

This all depends on the region they live in, and the hunting conditions. They may not be able to secure food every day, hence they eat more on some days and less on others.

Snowy owls are not picky eaters. They eat a variety of animals, such as voles, rabbits, rodents, and other small mammals that they can get their claws on.

Baby snowy owls feed on the same animals, as they eat what their parents bring them.

How Do Snowy Owls Hunt Their Prey?

Snowy owls are powerful hunters, with large talons that kill their prey with a crushing blow. They’re silent hunters, using the element of surprise to their advantage.

What Do Snowy Owls Eat in Winter?

Snowy owls eat mostly mice and voles during the winter. These small rodents live throughout North America in many habitats where they are difficult to track down.

What Do Snowy Owls Eat in Summer?

During the summer, snowy owls eat mostly lemmings and waterfowl (birds). Lemmings are small rodents who live in grassy areas like the tundra on the arctic circle.