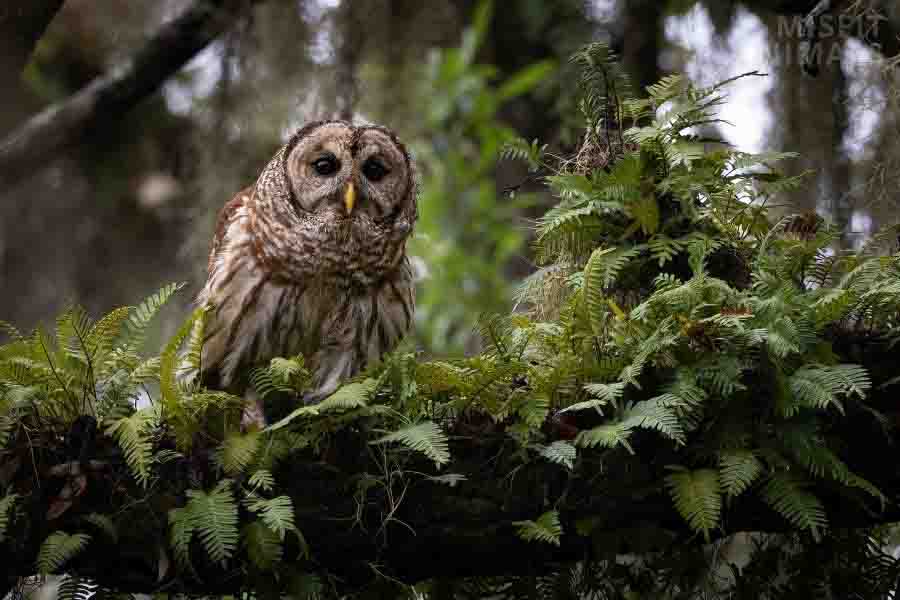 Owls are a popular topic for bird enthusiasts and general nature lovers alike. These regal creatures have always possessed an air of mystery and intrigue.

But what do barred owls eat?

In this article, we’ll take a look at the dietary habits of the barred owl and explore some of the items that make up its regular diet.

What Is the Barred Owl?

The barred owl is a large gray and white bird that has a round head with what looks like horizontal bars across its eyes. They are heavily built and have long wings and tail feathers.

As seen in all owls, they have strong, sharp claws, which they use to catch and grasp this prey very quickly. Their hooked beak makes it easy to tear their food into smaller pieces.

Barred owls are one of the most common owls of North America, but they are also very ferocious animals, known to hunt and eat just about anything that moves.

What Do Barred Owls Eat?

Barred owls are carnivores, meaning they eat meat. They hunt for prey on the ground and in trees, looking for small mammals such as mice, rabbits, squirrels, chipmunks, raccoons, hares, moles, and shrews.

Barred owls have a varied diet, made up of several animals such as:

Some of the most common animals they eat are mice, rats, squirrels, moles, shrews, and various fish that live along banks of rivers or lakes. They also feed on birds such as thrushes, ducks, coots, and woodpeckers.

Small mammals make up a significant portion of the barred owls’ diet[1]. This diet varies depending on what is available in their habitat but typically consists of:

In the summer they will also hunt bats that are exiting caves or trees where they live.

Another frequent type of prey animal of barred owls is birds[2].

Grouse are a type of bird with many different species that barred owls typically hunt. They are in the order Galliformes, which means they have heavy bodies and rounded heads with small beaks, making for a great meal.

Grouse inhabit temperate forests and boreal forests across Canada, Alaska, northern Europe, and Russia. In the US, they range from Alaska to northern California.

Amphibians are certainly some of the most unique creatures on earth. They are able to breathe both through their lungs and their skin, making them extremely resilient.

Barred owls feed on amphibians such as frogs and salamanders. They are adept hunters and can adjust their diet depending on available prey. If amphibians are plentiful, the owls will hunt primarily amphibians.

Cold-blooded vertebrates covered in scales or scutes make up a small part of a barred owl’s diet. Reptiles are the sister group to the birds, which together form the class of amniotes.

It is estimated there are currently ~7000 living reptile species, which have existed for 240 million years.

Barred Owls eat reptiles because of the abundance and low caloric content of reptiles compared to rodents[3].

They prey on a wide variety of reptile species, including the following:

Fish make up a small part of what barred owls eat.

Most owls tend to feed less on fish, though there are some species that feed entirely on these aquatic creatures.

Invertebrates are a large group of animals that have no backbone or spinal column. This includes what is shellfish, insects, and worms.

Barred owls do eat invertebrates, but they do primarily eat vertebrates (mammals, rodents, amphibians, reptiles, etc.). Insects especially are plentiful and make for an easy snack for these birds of prey.

Barred owls are found in a wide range of regions, and depending on where they live, their diet changes.

What Do Barred Owls Eat In The Wild?

Barred owls are carnivorous birds that live in the wild. They typically eat small mammals, such as rodents. However, they will also eat larger prey like raccoons and skunks.

Barred owls typically eat small animals as these are easier to catch and kill. They mostly feed on rodents and other similar small mammals.

Occasionally, they can eat larger prey, such as raccoons and skunks. These animals do live in the same habitats and do encounter each other in the wild.

As with most wild animals, their diet is restricted by the availability of prey. This takes both region and seasonality into account. If rodents are widely available, barred owls will feed more on these.

What Do Barred Owls Eat In Captivity?

A barred owl’s diet in captivity is largely shaped around what they eat in the wild as well as what is available to the caretakers. Their diet mainly consists of mice or other small, dead animals.

Barred owls are hunters in the wild. Unfortunately, it is not always possible to feed captive birds live prey, and they are therefore fed dead animals much of the time.

These animals are mostly small, such as mice or cockarels[4]. This depends on what food is available for purchase by the caretakers.

What Do Baby Barred Owls Eat?

Baby barred owls are carnivores by nature, which means they eat meat.

As younglings (or owlets), they can’t hunt for themselves. They rely on their parent at the beginning of their life, and will as such eat the same things, but processed beforehand.

Owls start out feeding their young regurgitated food but move on to solid foods quickly. The mother will throw small chunks of meat into the nest, allowing the baby owls to feed.

Do Barred Owls eat every day?

Barred owls have a higher metabolism, and as such, they eat every day. They can go a few days without food, but prefer to feed every day.

Barred owls are meat-eaters, also known as carnivores. Like most other birds of prey, their bodies aren’t built to process plant matter. They can only digest soft-tissue animal matter though and will regurgitate any bones, feathers, or other hard-tissue matter they ingest.

They eat anything that is small enough to fit inside their mouths, which can include insects, rodents, amphibians, and other birds. They are not picky eaters!

How Do Barred Owls Hunt?

Barred owls hunt at night. They are patient, often sitting and waiting (perching) for hours at a time. They use their sharp claws and beaks to attack their prey.

These owls are large, powerful predators in the forests of North America where they live. While they hunt at night, they spend most of their time roosting in trees or snoozing in nests during the daytime.

Here are the tools barred owls use to hunt:

Barred owls are a common sight in North America and they feed on small animals like rodents, rabbits, and snakes. They also eat amphibians, birds, insects, and the occasional fish.