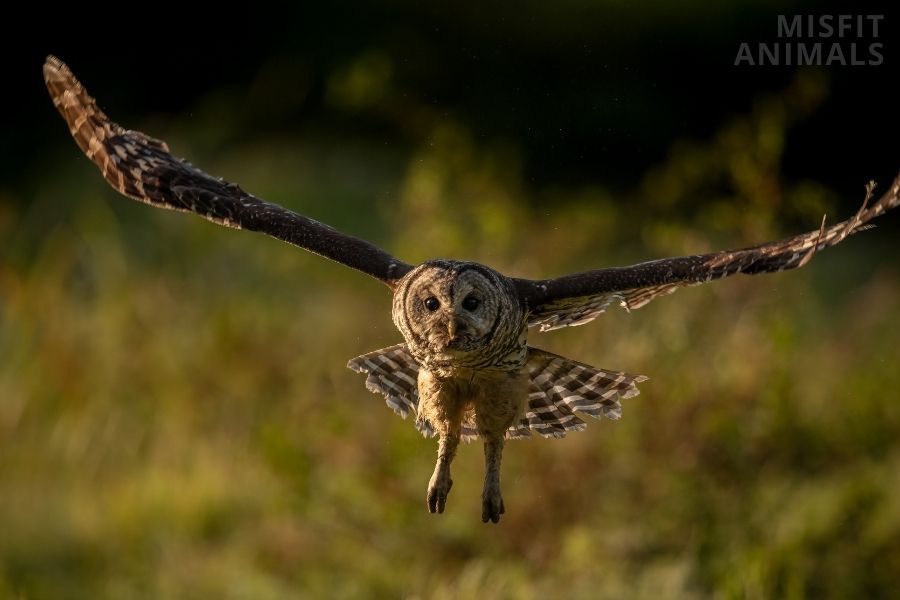 Have you ever seen a Barred Owl? Chances are if you’ve spent any time outdoors in North America, you have. These owls are one of the most common owls in the region.

In this post, we’ll take a closer look at this amazing bird, from its physical features and diet to its behavior and habitat. So pull up a seat by the fire, pour yourself a hot cup of cocoa, and let’s learn about the Barred Owl!

Barred owls are one of the most widespread owl species in North America. They can be found in a variety of habitats and are named for their unique feather patterns.

The barred owl is an interesting creature. It’s typically found in dense forests range year-round. Here are some interesting facts about barred owls.

The barred owl is a relatively new species, having evolved only about 1 million years ago. Barred owls are very adaptable birds, and have been able to thrive in a wide variety of habitats.

The barred owl is a North American bird that is in the genus Strix. They are found in eastern North America, but have been introduced to the west coast of the continent where they are considered invasive.

Being a member of the Strigidae family these owls are considered “true owls”. It was first discovered in 1799 by naturalist Benjamin Smith Barton in Philadelphia.

The Eastern Barred Owl is found in eastern Canada and the United States. They are typically gray with white spots on their chest. Their wings are barred with dark and light brown feathers.

The Western Barred Owl is found in western North America. They are typically gray with white spots on their chest. Their wings are barred with dark and light brown feathers.

The Florida Barred Owl is found in Florida and southern Georgia. They are typically gray with white spots on their chest. Their wings are barred with dark and light brown feathers.

The Mexican Barred Owl is found in Mexico and Central America. They are typically gray with white spots on their chest. Their wings are barred with dark and light brown feathers.

The Barred Owl has a barred, brown, white plumage, a round head with no ear tufts. Their beaks are yellow and their eyes are black.

Barred Owls typically measure about 18-24 inches in length, and have a wingspan of about 40-48 inches. They weigh between 1 and 2.5 pounds.

They get their names from the white bars on their mantle and back and slightly crescent-shaped barring around their head and neck.[2]

The barred owls call is loud and emphatic and vocalizations are usually comprised of eight hoots[3], or a two-phase hoot with a downward pitch.

Barred owls are found in North America and are the most common owl in the eastern United States. Barred owls live in a wide variety of habitats, from forests to open fields, but they prefer dense woods.

They are also found in evergreen and deciduous forests.[4]

Barred owls usually build their nests in tree cavities, but they will also use abandoned nests of other animals or make their own on a platform of sticks.

The Barred Owl is a common sight in North America, where they can be found in a variety of habitats. Barred Owls are opportunistic predators, and will eat prey smaller than them.

Barred Owls are known to cache food, meaning they will store food away for later. They’re skilled hunters and generally have no issue finding food.

Their mating patterns are generally monogamous, and both the male and female take turns to incubate the eggs.

Barred Owls are territorial birds, and will often signal their presence to other owls by hooting. Roost selection is largely dependent on thermoregulation. Aside from their territorialism, they’re described as “mild and engaging” when it comes to people.[5]

Barred Owls are mostly nocturnal, although they can also be active during the day.

Barred Owls are considered to be carnivores, which means that they eat meat. They typically eat small mammals, but they have also been known to eat birds, amphibians, and reptiles.

Barred Owls typically hunt from a perch. They wait in trees before flying down and catching prey on the ground. They’re opportunistic hunters and will eat what’s easiest available. The barred owl’s diet looks a lot like other similar-sized owls’.

Their eyes are large to capture much light, aiding in their night vision and nocturnal hunting. Attacks are done from 20 to 33 feet away, helped by their silencing feathers which keep their ambush element intact.

The Barred Owl is a predator that is native to North America. Its natural predator is the great horned owl. They’re also sometimes hunted by the northern goshawks, get run over by vehicles, and captured in traps set to hunt other animals.

While they may not be at the top of the food chain, Barred Owls are an important part of the ecosystem. One of the main threats to Barred Owls is habitat loss[6]. As forests are cleared for development or other purposes, the owls lose their homes.

They are preyed upon by other forest predators, such as birds of prey of canine and feline predators.

Barred Owls typically live around 10-12 years in the wild but can live up to 20 years in captivity. They have a varied life cycle, which can be broken down into four stages: egg, nestling, fledgling, and adult.

Barred Owls lay one to four eggs per clutch, and the eggs incubate for about 28 days. Once the chicks hatch, they are cared for by both parents for about eight weeks until they fledge (leave the nest).

Breeding starts at two or three years old. They typically live to be about eight years old in the wild but can live up to 20 years in captivity.

Barred Owl populations are stable and have not been affected by the decline of other owl species. There are currently 3.4 million barred owls that are partners in life.

Barred Owls are considered a Species of Least Concern by the IUCN. Barred Owls are threatened by habitat loss as they require large areas of forest to live in.

How do barred owls hunt?

Barred Owls are considered “sit and wait” predators, meaning they typically don’t actively search for prey, but rather wait for prey to come to them. They kill their prey by biting them sharply on the neck.

How fast are barred owls?