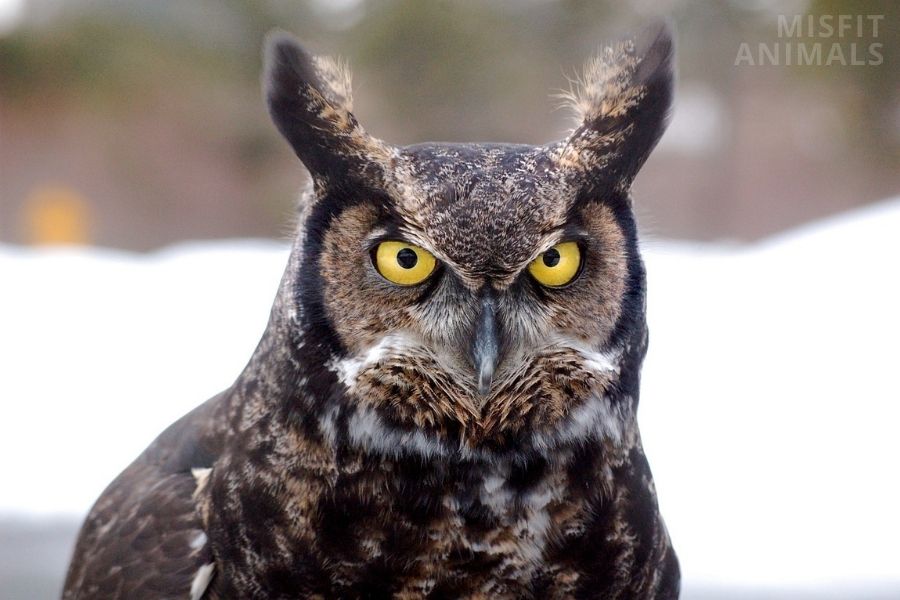 Each owl has its own unique characteristics and features. In this article, we will take a closer look at the largest owl species in the world, explain how big they really are, and discuss their most prominent features.

The Blakiston’s fish owl (Bubo Blakistoni) is very rare. They are also the biggest owls in the world, with a wingspan of 72 inches (180 cm).

Blakiston’s fish owls lives in riparian forests which have rivers running through them. There are few of these forests left.

The Eurasian Eagle Owl is a bird of prey in the family Strigidae. It is also known as an eagle owl or Eurasian eagle-owl. It is from Eurasia and is the second-largest species in the world.

Eurasian Eagle Owls live high in Eurasia, from Finland and the Kola Peninsula of Russia all the way to northern Mongolia. Eurasian Eagle Owls adapt easily to different habitats. This makes them extremely flexible when it comes to living arrangements.[2]

The Great Grey Owl, another one of the largest of the owls, is a large bird native to North America. They have a wingspan that can reach up to 60 inches. It has leading-edge primaries that are long and wide creating an aerodynamic shape for silent flight.

Great Grey Owls live in habitats of dense forests, typically pine and fir. These forests typically have a small opening or meadow nearby where they hunt.[3]

They have been recorded creating nests in large tree cavities and on the tops of cliffs. Though Great grey owls have been found breeding in the same nesting sites year after year, they often move their nests over time.

Most of the world knows that America is home to majestic and regal eagles, but few know about their cousin, the Snowy Owl. This white-feathered predator is a silent killer known for its ability to take down prey twice its size.

Snowy Owls are most commonly found inhabiting the Arctic tundra, barren coastal cliffs, and islands. They also inhabit the taiga forest and alpine meadows. They especially prefer regions high in latitude, altitude, and/or open terrain where they can hunt for large prey like lemmings.[4]

Due to their white color, they blend in perfectly in snow, allowing them to sneak up on prey without being detected.

These owls are mostly solitary birds, although they will congregate during the breeding season around favorable hunting areas. They nest on the ground or on cliffs and lay 3-11 eggs per mating season, which they incubate for about five weeks.

The Great Horned Owl is a large North American owl. It has two common names, the “Tiger Owl” in some areas of the United States and “Buho Hombre Grande” in Mexico.

The Great Horned Owl is widespread and can be found almost anywhere that is warm enough for them to survive in the Americas. The habitats of these birds vary from anything between deserts and mountain ranges, all the way down to coastal regions and swamps.

This owl adapts itself depending on the location where it is found. In colder climates such as Canada and the Northern United States, these owls tend to be bigger and bulkier than their southern counterparts.

The biggest owls in the world are the Blakiston’s fish owl, Eurasian eagle-owl, great grey owl, snowy owl, and great horned owl. These are all large owls, known for preying on larger animals by taking advantage of their size and strength.

Is the eagle owl the biggest owl?

No, the largest owl is the Blakiston’s Fish Owl.

Which is the second largest owl?

The Eurasian eagle-owl is the second-largest owl in the world. It spends much of its time perching quietly and hunting by flying quickly over open ground and swooping down on prey.

Are owls stronger than eagles?

Eagles are larger and stronger than owls. The eagle gains strength from its sharp claws and formidable beak to carry out daily life activities or when hunting for food.