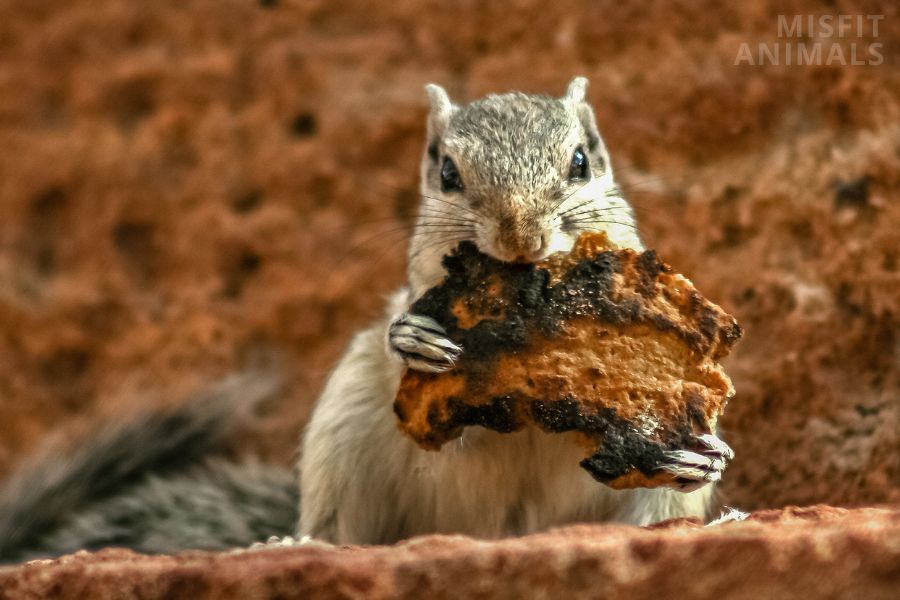 Squirrels are not the herbivores many people think they are. Squirrels eat meat. They are known to kill and eat smaller, defenseless animals when they have the chance.

Many people are surprised when they find out that squirrels eat meat. There is a long-held assumption that squirrels primarily eat nuts and a bit of fruit.

The truth is that their diets are far more varied.

In this article, we look at what squirrels eat, what kind of meat they eat, and uncover the legend about a so-called vampire squirrel.

Yes, squirrels do eat meat. Their omnivore diet includes a range of foods found in the wild including plant-based foods and meat. Their primary sources of animal protein come from small amphibians, insects, and birds.

Squirrels are scavengers. They eat whatever they can find. In the wild, this includes plant-based foods and other animals.

As mentioned, squirrels also eat meat from various sources. This depends on the type of squirrel and the habitat they live in.

Here are the most common animals eaten by squirrels:

Squirrels are not known for hunting but will kill small, defenseless animals like young birds, mice, and rabbits when other foods are scarce.[1]

What Animals Do Different Types of Squirrels Eat?

Squirrels eat a variety of small rodents, most commonly hares and rabbits. The American red squirrel is the most common squirrel that eats young snowshoe hares. [3]

One of the most common protein sources of squirrels is birds and their eggs. They rarely hunt for birds, as they are difficult to catch, but do eat dead and injured birds. Bird eggs are easy to collect, as squirrels are adept climbers.

The following squirrels are known to eat birds’ eggs:

The following types of squirrels are known to eat nestlings:

Are There Carnivorous Squirrels?

It’s not known if there are strict carnivorous squirrels. What we do know is that there are squirrels that eat more meat than others.

The South flying squirrel is known as the most carnivorous species in North America. It’s still an omnivorous species, but they eat more meat than other squirrels. These nocturnal gliding squirrels typically eat moths, wood-borning beetles, and nestlings.

On the island of Borneo is a mysterious tufted ground squirrel (Rheithrosciurus macrotis). It lives deep in the forests and is rarely seen. It is known by locals as the ‘vampire squirrel.’

Twice the size of most tree squirrels, this vampire squirrel is believed to have a taste for blood.

According to a local legend, as told by hunters, the squirrel perches on branches and waits for prey. When spotting a deer, the squirrel jumps down onto the deer and rips open its jugular vein, and drinks the blood.[5]

This squirrel is rarely spotted and not well studied. Scientists doubt the legends surrounding the large ground squirrel, but they have yet to be proved or disapproved.

Should We Be Scared of Squirrels?

Under natural conditions, there is no reason to fear common squirrels as they are more afraid of us. When people feed squirrels, these rodents lose their instinctive fear of us and can become aggressive.

Squirrels are generally not violent or aggressive towards humans or large animals.

But, anything is possible under the right circumstances. In 2005, during a pinecone shortage in a Russian village, a group of black squirrels attacked a stray dog.

According to witnesses, the squirrels ripped off pieces of the dog as they fleed from the people who rushed forward to try to save the dog. Witnesses said the dog was killed in less than a minute.[6]

These kinds of reports are rare.

When people feed squirrels, the animals lose their instinctive fear of humans. This means they can turn aggressive if not fed.

In 2019, Battery Park City Authority (BPCA) warned New York park-goers to keep their distance and not to feed the squirrels. This was after an alarming increase in reports of squirrel bites and scratches in Lower Manhattan’s Rockefeller Park Playground.[7]

In a community notice, the BPCA wrote, “Squirrels exhibiting aggressive behavior have usually been fed by humans before – and are looking to eat again or feel threatened.”[8]

Squirrels feeding also causes the squirrel population to increase, as animals do when food is abundant.

The more squirrels there are the more mouths there to feed. When people feed squirrels less, like during the winter when fewer people visit parks, squirrels become desperate and aggressive.

Yes, squirrels do eat other squirrels occasionally. Cannibalism is observed in both North American gray and red squirrels. This is not a common occurrence and takes place when no other foods are available.

Squirrels eat meat as a part of their balanced omnivore diet. They are not known to hunt, but food shortages can cause squirrels to prey on small defenseless animals, particularly infant animals.

We have no reason to fear squirrels simply because they are meat-eaters. Squirrels instinctively stay away from humans.

Unfortunately, the feeding of squirrels in parks has made many populations of urban squirrels equate people with a source of food. These squirrels have lost their natural fear of humans and can show aggression towards people.

No, squirrels are not vegetarians. Squirrels are omnivores. They eat a varied diet including plant matter, nuts, seeds, wild berries, fungi, and meat. Meat sources include insects and small animals like birds, mice, and young rabbits.

Do Squirrels Eat Other Animals?

Yes, squirrels do eat other animals. This includes roadkill or carrion, frogs, mice, birds, and young rabbits. Squirrels like the Eastern gray squirrel and the American red squirrel have been observed eating their kind.