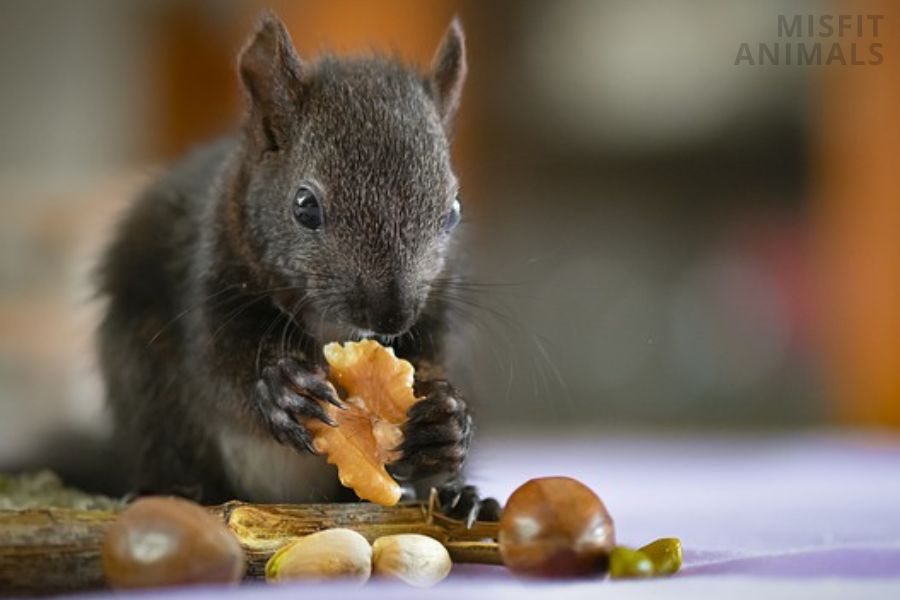 Many people assume that they are herbivores, but the squirrels are omnivores and eat meat and plant matter.

The stereotypical picture of a squirrel holding an acorn or a small wild berry is ingrained in our minds. It makes the idea of a squirrel eating another animal shocking.

But what does a typical omnivore squirrel diet look like? Do you need to worry about squirrels eating your pets’ meat-based meals?

In this article, we answer these questions and find out if there are any squirrels that are carnivores or display cannibal behavior.

There are more than 200 species of squirrels. Their diet varies a lot depending on the species, as well as the habitat. They are foragers and eat what they can find in the environment.

What most squirrels eat in the wild:

In urban and suburban areas, squirrels scavenge for food in trash bins.

These are not the best forms of food for squirrels. These scavenged human foods are often processed, full of sugar, salt, fat, and additives, that squirrels don’t digest well. They can make squirrels sick.

Why Do Squirrels Eat Meat?

Squirrels eat meat when it’s easily available and when their bodies need it. Female squirrels need protein and eat more meat when pregnant and nursing their young.

There are three reasons why squirrels eat meat:

Changing seasons, loss of natural habitat and growing competition for food can cause periods of food scarcity for squirrels. When times are tough, being able to eat meat is a way to survive.

Squirrels are known to scavenge for food. If they spot a dead animal, or they have access to a nest of young unprotected chicks, they grab the opportunity to add protein to their diet.

Even squirrels that eat more plant matter than anything else eat meat from time to time.

For example, American red squirrels are often referred to as ‘granivores.’ They primarily eat seeds, but have been observed to eat meat when there is an opportunity.[2]

Pregnant and nursing female eastern gray squirrels are known to eat insects, the meat of animals, and even bones to help boost their levels of protein and minerals.[3]

What Animals Do Squirrels Eat?

Squirrels typically don’t hunt. Instead, they look for easy meals:

Squirrels are not known for hunting and attacking larger animals. But, there are always exceptions to the rule.

There are eyewitness reports of squirrels attacking and eating a dog in a park in Russia in 2005. According to the witnesses, the stray dog was barking at the squirrels when a group of squirrels suddenly attacked the dog.

It was said that there was a food scarcity at the time.[4]

News like this makes dog owners feel uncomfortable. Residents nearby started to avoid the park because they feared that these aggressive squirrels could attack again.

Should You Worry About Squirrels Attacking Your Dog?

It’s not common for squirrels to attack dogs. Most cases of squirrel bites on dogs are when squirrels have to defend themselves against an attack from a dog.

What made the savage squirrels in Russia attack a dog back in 2005 is unknown. We do know that feeding squirrels can make them lose their natural fear of humans. This results in aggressiveness when they don’t get fed.[5]

If you have a dog, cat, or small children at home, keep this in mind and avoid attracting squirrels into your garden.

Here are tips to stop making squirrels feel at home in your garden:

Yes, some squirrels are cannibals, but it is rare. Cannibalism has been observed in both Eastern gray squirrels and American red squirrels.

Eastern Gray Squirrels have been seen eating other gray squirrels.[6]

Using DNA analysis, the researchers found that the murderers were not the fathers of the young squirrels they killed.

The study, published in The Scientific Naturalist, reports that males aren’t cannibalizing young squirrels because of food scarcity. It was the opposite. They found that infanticide increases in years when food is abundant.

When food is abundant, female squirrels are more likely to have a second litter of pups. If a male kills the first litter she stops lactating and can mate again. [7]

Squirrels are omnivores, not carnivores. But some squirrels eat more meat than others.

The nocturnal Southern flying squirrel is one of the most carnivorous members of the squirrel family.

This gliding squirrel diet is high in meat sources from insects like wood-boring beetles, bird eggs and nestlings, and carrion.[8]

Do Squirrels Eat Other Animals?

No, squirrels are not herbivores, they are omnivores. They eat a diet rich in plant matter, nuts, seeds, and meat. Squirrels’ meat sources in the wild include insects, carrion, birds’ eggs, nestlings, young mice, and infant rabbits.

Squirrels have also been observed eating other squirrels.