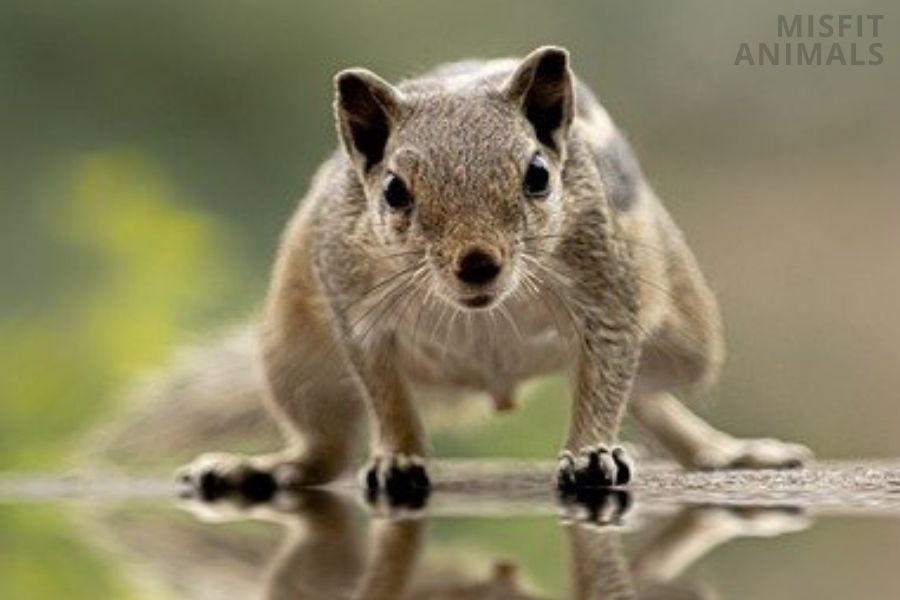 Squirrels are not dangerous to humans, as long the relationship between humans and squirrels maintains a natural order. Squirrels are naturally afraid of humans, but lose their fear when people feed them. They can still bite. Squirrels do inflict damage on properties, as they chew on wires and wood.

Squirrels are naturally afraid of humans and are unlikely to attack anyone.

This is the primary danger of squirrels.

They make noise, tear insulation, and gnaw on electrical wiring.

There are also occasional reports of squirrel bites and scratches in popular parks.

But why do squirrels bite? And what can you do to protect yourself and your home from squirrels?

In this article, we look at what can make squirrels aggressive, how to keep squirrels out of your home, and how to avoid being bitten by a squirrel.

Squirrels become aggressive when they are regularly fed by people, and the feeding suddenly stops. They lose their natural fear if people feed them. When the food stops coming, they get dangerous.

One of the harms of feeding wild squirrels is that they lose their instinctive fear of us. They start to see us as a food source. They become aggressive when humans do not supply food as expected.[1]

If squirrels in your garden are eating the food left out for your dog or cat, it can become a source of conflict between your pet and the squirrels.

Squirrels can bite, but they rarely do. They bite and scratch humans by mistake (while eating out of a hand), or on purpose when angry or scared.

Squirrels can bite, and their bites hurt. This is because squirrels have four sharp front teeth they use to crack nuts and gnaw. These teeth never stop growing.[2]

Squirrel rehabilitator Emilie Nelson of North Carolina Wildlife Rehab knows how painful it can be when a squirrel bites. She put food in the cage of a squirrel she was rehabilitating when it began biting her.

According to Nelson, squirrels can bite with 7,000 pounds of pressure. This is how they crack open nuts.

At the time of her post, she said she had not been able to use her hands for three days.[3]

Why Do Squirrels Bite?

Squirrels bite when they are threatened, or if they rely on humans for food. It’s not usual for squirrels to bite people, but the likelihood of being bitten by a squirrel increases dramatically when feeding squirrels, especially by hand.

Squirrels rarely bite people, but it most often happens in the following scenarios:

When they do bite, they target the hands.

Eager pet squirrel owners need to know that a pet squirrel can bite if it has been recently taken from the wild and is not tame.

Squirrels bite when people are trying to catch or trap them. If you do need to trap a squirrel, it’s important that you use the right equipment and protective gear.

Squirrel bites are painful, but they are unlikely to transmit rabies or inflict long-term damage. Seek medical attention if you are bitten by a squirrel.

There has not been a documented case of a squirrel transmitting rabies to a human in the U.S. It’s believed that this is because squirrels don’t survive attacks from rabid animals.[4]

Although rabies is not linked to squirrel bites, infection is a concern for any bite.

The six-year Scottish study of squirrel bites followed up with 21 of the 25 patients. They found that despite only a few receiving prophylactic antibiotics, none of the patients developed an infection.

According to the study published in The BMJ, squirrels only bite after humans initiate close contact.[5]

How To Avoid Be Bitten By A Squirrel

To avoid being bitten by a squirrel, do not feed or approach them and avoid eating in parks where squirrels are fed by other people. Do not attempt to rescue or capture a squirrel without guidance or protective equipment.

Here are three ways to avoid being bitten by a squirrel:

The best approach to avoid attacks or bites from wild animals is to keep your distance.

Avoid approaching squirrels for a closer look or to take a photo. There is a chance the squirrel is used to being fed by humans and interprets your approach as an opportunity to get food.

Squirrels used to being fed may bite when you have nothing to give it.

It is also advised to avoid picnicking or eating in a park where people are known to feed squirrels.

Feeding squirrels creates a connection between food and humans in their brains. Squirrels accustomed to being fed become aggressive when not fed.

If you do feed squirrels, don’t do it by hand. Most squirrel bites occur when people are hand feeding them.

Don’t try to rescue a squirrel without protective equipment or know-how.

If you find an abandoned squirrel kitten (infant), ask a local vet for contact details for a squirrel rehabilitator.

How to Treat a Squirrel Bite

If you do happen to be bitten by a squirrel, here are three steps to take:

How To Keep Squirrels Out Of Your Home

Keep squirrels out our your roof eaves or attic by blocking entry holes and keeping overhanging tree branches trimmed. It also helps if you don’t encourage squirrels by feeding them in your garden.

If there are squirrels in your neighborhood, you want to ensure they don’t build their nests in your attic.

Squirrels cause damage to your home, including gnawing into electrical wiring. This is the greatest danger squirrels pose as it can lead to an electrical house fire.[6]

Here are tips to stop squirrels from setting up camp in your home:

If you have to trap a squirrel, Connecticut’s Department of Energy and Environmental Protection advises using metal box traps that are a minimum of two feet long.

You can bait the traps with apple slices or nuts. Set the traps up in the attic or along rooftops. Release squirrels into the wild as soon as you can after trapping them.[7]

Related: Can You Keep Squirrels as Pets?

Squirrels are not naturally dangerous animals. They rarely show aggression towards people and are likely to run away when approached.