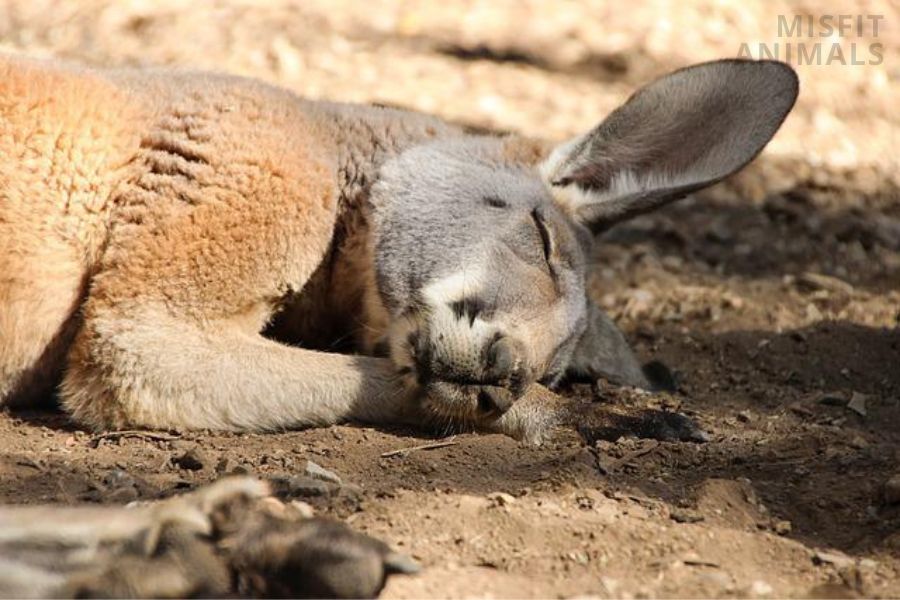 The average person doesn’t know much about kangaroos’ activities and habits. While they are interesting and well-known animals, many aspects are mysterious about the life of kangaroos.

So the question arises: how do kangaroos sleep? What are their sleeping habits? And do they lie down or stand up when sleeping?

In this article, we dive into the finer details of kangaroos’ sleeping habits, including where, when, and how they sleep.

How Do Kangaroos Sleep?

Kangaroos sleep like humans: lying down. They find a cool or shaded spot and lie down on their side or back. Kangaroos rest inconsistently.

Roos spend most of their awake time grazing. This is only interrupted by fighting, moving, mating, and sleeping.

As their native habitat of Australia is hot all year round, they like to rest in shaded spots under trees and brushes. If the weather is especially hot, they dig shallow pits to cool off.

Kangaroos are vigilant animals, even when they sleep. They are aware of their surroundings and react quickly if they sense danger.

Red kangaroos are likely to wake up and flee at the smallest disturbance while resting.

Here is a short overview of how kangaroos sleep:

Yes, kangaroos sleep every day. They sleep for the same reason as other animals: to regain energy, rest their immune system, and metabolize food.

Although their sleeping patterns are inconsistent, kangaroos usually sleep during the day.[1]

Why Do Kangaroos Sleep?

There are many reasons why kangaroos sleep:

Kangaroos sleep according to their energy output. The more the individual moves, the more it needs to rest.

Kangaroos sleep lying down on their sides during the day. They find a cool and shaded spot or dig a shallow hole in the ground. Kangaroos usually rest during the daytime.

The sleeping habits of kangaroos are similar to other herbivores and prey animals.

They are keen and vigilant while sleeping and easily alerted. There are few predators that hunt kangaroos, but they remain conscious, just in case.

How Do Kangaroos Sleep?

Kangaroos sleep in similar positions to humans. They sleep on their sides with their back limbs sideways and their tails relaxed.

The forelimbs may support their heads but it’s not always the case.[3]

The way kangaroos sleep is normal, but it has its unique characteristics:

When Do Kangaroos Sleep?

Kangaroos sleep during the day. Their sleeping pattern is inconsistent though, as they can also rest at night.

Sleeping is mostly an interruption of kangaroos’ main activity, grazing.

There are also other activities that interrupt grazing apart from sleeping:

Due to the hot weather of Australia, kangaroos rest in cool spots on the ground. Kangaroos move in mobs, so an individual relies on their group’s alertness apart for safety. They can sleep anywhere in overcast and cool weather.

Here are some spots where kangaroos are often found sleeping:

How Long Do Kangaroos Sleep?

The exact time kangaroos spend sleeping is unknown. They accumulate several hours of sleep per day, but it depends on how much energy they use throughout the night and day. Joeys sleep more than adults.

Kangaroos are vigilant animals. They are easily disturbed and never sleep for hours at a time. Short rests are more likely to occur. These are not continuous and fluctuate heavily between individuals.

Kangaroo joeys (especially young ones) sleep more than adults. Babies that started touching the ground for the first time frequently return to their mother’s pouch to catch some sleep.

There is no discernable difference between the sleeping time of the six kangaroo species in Australia.

Numerous factors influence how much sleep kangaroos get daily:

What Do Kangaroos Do During the Day and Night?

Kangaroos are nocturnal animals. They are more active during the night and rest during the day. The brunt of their time is taken up by grazing. Other activities include fighting, mating, and moving.

The nocturnal nature of kangaroos does not mean they rest throughout the day. They are active animals and their sleep is frequently interrupted by other activities.

What Do Kangaroos Do During the Day?

Kangaroos catch their sleep during the day. Australia’s temperatures can rise as high as 123.26 °F which makes physically demanding tasks harder to do.[5] Sleeping during the day and carrying out tasks at night helps them conserve energy.

Activities such as fighting and mating do occur under the sun, but they are less frequent.

What Do Kangaroos Do at Night?

Their activities are physically demanding. When they are not grazing, males fight and try to mate. Individuals also cover up to four miles per day.

Roos are more active during the night and rarely rest from dusk to dawn.

Kangaroos sleep laying down on their sides or backs. They often rest their heads on their forelimbs. They prefer a shady spot or a shallow pit to rest in.

Kangaroos sleep for short periods and are easily alerted. They conserve their energy during the day and do their activities after sundown. The daily sleep they get is unknown, but joeys and older individuals need more sleep than adults.

Do Kangaroos Sleep Standing Up?

No, kangaroos do not sleep standing up. Kangaroos are alert and nimble animals, so they lie down comfortably during sleep. They rely on their hearing and their mob’s vigilance. When they are disturbed, they get up in a second and flee.

Yes, kangaroos do nap. Their sleep can be categorized as napping, as they rarely sleep continuously for more than an hour. Kangaroos usually lie down to laze rather than sleep or nap.

Do Kangaroos Sleep in Dens?

No, kangaroos do not sleep in dens. Kangaroos do not build dens for any reason and they do not have permanent homes. They move around freely and when they want to sleep, they either look for a shady place, dig a small pit, or lie down where they are (if the weather is cool enough).

How Do Captive Kangaroos Sleep?

Captive kangaroos sleep the same way as their wild counterparts. Wild kangaroos look for a shady place for rest, and so do captive ones. If the enclosure has any roofed structures, kangaroos likely seek sleeping spots under them.