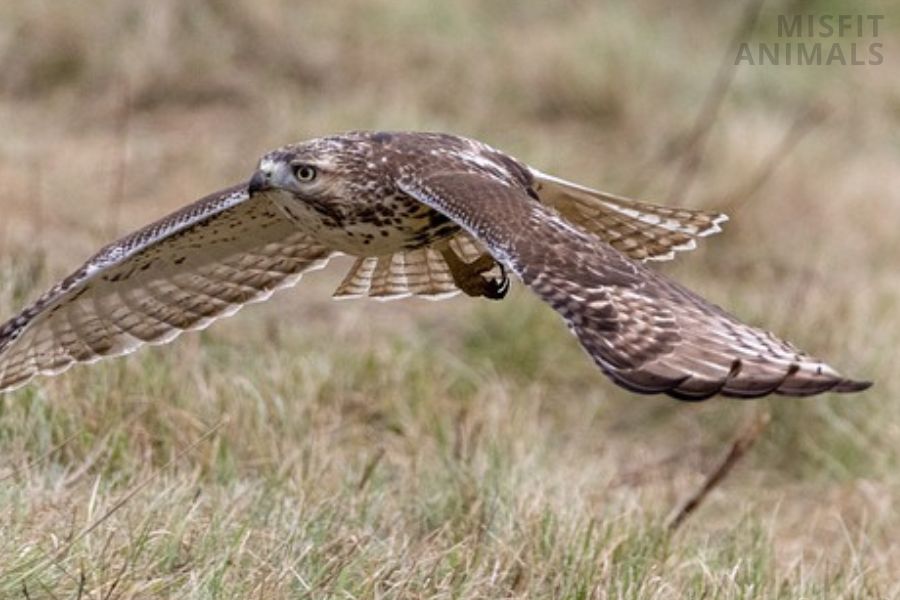 Did you know that hawks can be found throughout Michigan? There are a variety of hawk species that call Michigan home, each with its own unique characteristics.

In this article, we’ll take a closer look at some of the hawks found in Michigan. We’ll discuss their habitats and diets, as well as what makes them unique among birds of prey.

Are There Hawks in Michigan?

Yes, there are hawks in Michigan. These birds of prey are found throughout the state, but they are most common in the southern and central regions.

The hawks are active all year long in Michigan. They are most commonly seen during the spring and fall migration seasons though.

During these times of the year, thousands of hawks travel through the state as they head to their breeding grounds further north or south.

There are many different species of hawks that can be found in Michigan.

Some of the more common species include the Cooper’s hawk, red-tailed hawk, and sharp-shinned hawk. These birds of prey are typically found in wooded areas and make their homes in trees.

Let’s look at the most commonly seen hawks on Michigan:

The Red-shouldered Hawk is a medium-sized hawk with long, broad wings and a short tail. It is one of the most common hawks in North America, and is found in wooded areas throughout the United States.[1]

The Red-shouldered Hawk is a protected species in Michigan, and its populations are stable.

The Red-shouldered Hawk gets its name from the red patches on its shoulders.

These birds are dark brown above and light brown below, with streaked breasts. Their tails are barred with black and white, and they have yellow eyes. Males and females look similar, but males are usually slightly larger than females.

The Northern harrier (Circus cyaneus), also known as the marsh hawk, is a medium-sized hawk that breeds across the northern hemisphere. It is a slim hawk with long wings and a long tail.

Its range in North America stretches from central Alaska to Newfoundland and south to North Carolina and Arizona. It is a permanent resident in Michigan.

It is also an important predator of voles, mice and lemmings.

The Sharp-shinned Hawk is a small hawk that lives in Michigan all year long. This hawk is secretive and hard to spot but can be found in wooded areas near open areas. This is where they hunt by swooping down and catching their prey.[2]

The name “Sharp-shinned” comes from the fact that this bird has very long, sharp legs. These hawks hunt by sitting and waiting on a perch until they see their prey, which they then chase after at high speeds.

The Northern Goshawk is a medium-sized hawk that is a year-round resident in Michigan. It is the largest member of the Accipitridae family in Michigan, and one of the two species of goshawk found in North America.

The hawk Goshawk is blue-gray above with a streaked white breast  and belly. The adult has a black cap with a white “eyebrow” and red eyes. Juveniles are brown above with buff-streaked underparts.

The Northern Goshawk breeds in coniferous and mixed forests across North America, including Michigan. It nests in trees, building a large stick nest lined with leaves, moss, and twigs. The female lays 3-5 eggs, which hatch in about a month.

The young hawks stay with their parents for several months before dispersing to find their own territories.

The Cooper’s Hawk is native to Michigan. It is a large bird of prey, with males typically measuring 18 to 20 inches in length and females 22 to 24 inches.

It is identified by its long tail and broad wings, and its plumage which is dark brown on the back and light brown on the belly.[3]

The Cooper’s Hawk is the most common species of hawk in Michigan, and it can be found in many different habitats throughout the state. It is a protected species in Michigan, making it illegal to hunt or kill.

The rough-legged hawk (Buteo lagopus), also known as the rough-legged buzzard in Europe and parts of Asia, is a medium-large hawk found throughout the Northern Hemisphere.

Rough-legged Hawks are variable in plumage, with light morphs being overall pale below with dark brown bars, while dark morphs are overall dark brown above with light streaks .

The legs and feet are feathered all the way to the toes in this species, which is unique among North American raptors.

Rough-legged Hawks breed mostly north of the tree line in Canada and Alaska, though they can be found breeding as far south as northern Michigan in the United States.

It is a migratory hawk, moving south for the winter. Some end up as far south as South America.

The ferruginous hawk (Buteo regalis) is a large bird of prey found in North America. The bird gets its name from the rusty color of its feathers.

It is one of the biggest hawks in Michigan and can have a wingspan of up to five feet.

The Ferruginous Hawk feeds on rabbits, mice, and other small animals. It nests in trees and cliffs. It is not currently listed as endangered, but it is considered a species of special concern in Michigan.

The bird is named for its rusty feathers, which can be a beautiful sight in the right light.

The short-tailed hawk (Buteo brachyurus) is a medium-sized hawk, known by its short tail.

This hawk inhabits open woodlands, prairies, and farmland. It preys on small mammals, reptiles, and birds.

The Short-tailed Hawk breeds in Michigan during the summer months. The nest is built in a tree or shrub, often near the edge of a forest. Females lay 2 to 4 eggs, which hatch in about 3 weeks. Younglings fledge at about 6 weeks of age.

The broad-winged hawk (Buteo platypterus) is a small hawk with long, broad wings. The name “Broad-winged” refers to the unusually wide span of the adult’s wingspan.

Adult Broad-Winged Hawks are dark above and rusty colored below, with a tail that is banded with white and black. Juveniles are similar in appearance to adults, but are more streaked below and have a browner tail.

Broad-winged Hawks breed in woods across eastern North America. They are one of the most numerous hawks in North America, with an estimated breeding population of 1.5 million pairs.

The majority of these birds winter in South America, although some remain in the southern United States.

They have a light brown body with darker brown bars on their wings and tail. The breast is streaked with brown. The juvenile Swainson’s Hawk looks similar to the adult, but the upper parts are cinnamon-buff with heavy brown streaks.

As a long-distance migrant, it winters in Argentina, Paraguay, and southern Brazil. It is rarely seen in the eastern United States outside of the breeding season.

The Swainson’s Hawk was first described by French ornithologist Louis Jean Pierre Vieillot in 1823. It is named after British zoologist William Swainson.

The Red-tailed hawk (Buteo jamaicensis), is a large hawk that breeds across much of North America, from western Alaska and northern Canada to as far south as Panama and the West Indies.

It is one of the most common members of the genus Buteo in North America or anywhere else in the world.

There are fourteen recognized subspecies, which vary somewhat in appearance and range.

The Red-tailed Hawk is one of the largest hawks in North America, with a wingspan that can exceed 1.5 m (4.9 ft). It is sexually dimorphic, with the female almost twice as large as the male.

Hawks in Michigan Based on Season

Hawks are a common sight in Michigan during the springtime. They can be seen perched in trees or power lines, hunting for small animals to eat.

Although they are not typically aggressive towards humans, it is important to give them space and not approach them too closely.

This is also the time of year when hawks return after migrating south for the winter, so you may catch a glimpse of a migrating kettle.

There are many different types of hawks in Michigan during the summer months. Some of the more common ones include the Cooper’s hawk, red-tailed hawk, and sharp-shinned hawk.

There are also a few less common ones such as the goshawk and broad-winged hawk.

Fall is a great time to see hawks in Michigan as they are preparing for winter. During this time, they are actively hunting and are seen chasing other birds or small animals.

Many hawks also migrate south at this time of year. Before migrating, they will often soar on thermals, circling and waiting to fly off.

While some hawk species are year-round residents in Michigan, others only make appearances during certain times of the year as they migrate between their breeding and wintering grounds.

In Michigan, hawks can be spotted in a variety of locations including the Huron-Manistee National Forests, Seney National Wildlife Refuge, and Sleeping Bear Dunes National Lakeshore.

Hawks typically nest in trees, but can also nest on the ground. Nesting locations vary by species of hawk.

Some common nesting sites for hawks in Michigan include white pines, red oaks, and sugar maples.

Are Hawks Protected in Michigan?

Yes, hawks are protected in Michigan. The Migratory Bird Treaty Act of 1918 makes it illegal to kill, sell, or possess hawks, eagles, and other migratory birds. This law is enforced by the U.S. Fish and Wildlife Service.

Hawks are important predators in Michigan ecosystems. They help to keep the populations of small animals in check, which prevents diseases and improves plant growth.

Despite their importance, hawks are still hunted in some parts of the world. In Michigan, it is illegal to hunt hawks except during special hawk hunting seasons set by the Michigan Department of Natural Resources.

These seasons are intended to help control hawk populations and to protect other wildlife species that might be harmed by hawks.

If you see a hawk being killed or harassed, you can report it to the U.S. Fish and Wildlife Service. Violations of the Migratory Bird Treaty Act can result in fines and jail time.