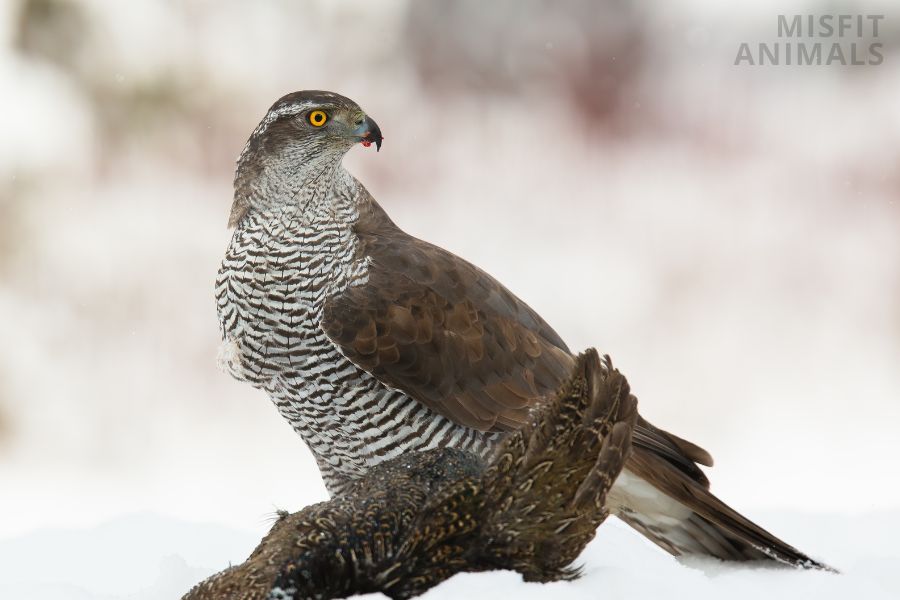 Do you enjoy watching birds soar through the sky? If so, you’re definitely not alone. Hawks are some of the most majestic creatures in nature, and they can be found all over the world.

In this article, we’ll take a look at the hawks in Illinois and provide some tips on how to spot them.

Are There Hawks in Illinois?

Yes, there are hawks in Illinois. There are several different species of hawks found in the state, including the red-tailed hawk, Cooper’s hawk, and sharp-shinned hawk. Each of these species has its own unique habitat preferences and behaviors, but all are found throughout Illinois.

Types of Hawks in Illinois

There are many different types of hawks that can be found in Illinois. Some of the most common include the Cooper’s hawk, red-tailed hawk, and sharp-shinned hawk. Let’s take a look at the most commonly found hawks in Illinois to know more:

The Sharp-shinned Hawk is a small hawk found in wooded areas across North America. These hawks are known for their long, thin legs and sharp talons which they use to capture their prey.

Sharp-shinned Hawks are the smallest of the North American hawks. They are also one of the most common.

Although they are small, sharp-shinned hawks are fierce predators. They hunt by perching in trees and waiting for prey to come within range.

Once they spot their target, they will swoop down and capture it with their talons. Their primary prey is birds, but they also eat small mammals and reptiles.[1]

The broad-winged hawk (Buteo platypterus) is a small hawk with a broad wingspan, hence the name.

Adults have dark brown upperparts, barred tails and wings, and light underparts. Juveniles are similar but have streaks on the breast and belly.

They build their nests in trees or shrubs, sometimes on the ground[2]. The female lays 2-5 eggs which hatch in 28 days. The young fledge in 35-42 days.

The broad-winged hawk has two color morphs: a light morph and a dark morph.

The light morph is characterized by a gray-brown back with white streaks, while the underparts are uniformly pale. The breast may have some brown streaks.

The dark morph has a chocolate brown back with buff streaks, and the underparts are streaked with brown.

The red-shouldered hawk (Buteo lineatus) is a medium-sized hawk. It is a member of the genus Buteo, which also includes broad-winged hawks, Swainson’s hawks, and Ferruginous Hawks.

A permanent resident of Illinois, the red-shouldered hawk is a young forest’s top predator. The population seems to be holding its own despite habitat fragmentation due to urbanization and agriculture. Deforestation is also a problem in some areas.

The red-shouldered hawk is protected under the Migratory Bird Treaty Act.

The Cooper’s Hawk is a large hawk with a rounded head and tail. The back is barred with brown and white, while the underparts are streaked with brown.

This hawk occurs throughout Illinois in woodlands, forests, and suburban areas. This hawk hunts small birds and mammals, often surprising its prey by flying through dense vegetation.

It nests in trees, often near water[3]. The female lays 3-5 eggs, which hatch in about 30 days. The young hawks leave the nest after about 45 days.

The Cooper’s hawk lives throughout Illinois in woodlands, forests, and suburban areas. This hawk hunts small birds and mammals, often surprising its prey by flying through dense vegetation.

The Red-tailed hawk is known for its red tails, hence the name. They are also known for being very good at hunting. They are one of the most successful hunters among all types of hawks.

Red-tailed Hawks typically nest in trees, but they can also nest in bushes or on the ground. Their nests are usually made of sticks and twigs where they lay their eggs in late April or early May.

The Red-tailed hawk is a very important bird of prey in Illinois. Not only do they help control the population of rodents and other small animals, but they are also a key part of the food chain.

Without these hawks, many other animals would not have enough to eat.

The harrier hunts by flying low over the ground, using its keen eyesight to spot prey. It also listens for the sound of rodents moving through the grass.

Once it has found its prey, the Northern Harrier will swoop down and grab it with its sharp talons.

The Northern Harrier nests in marshy areas, such as wetlands or near rivers. The nest is made of sticks and grass and is usually built in a tree or on the ground.

The Rough-legged Hawk is known for its rough legs. This hawk gets its name from the fact that it has feathers on its legs that are longer than those of other hawks.

This is a large hawk, with a wingspan of up to four feet. This hawk is also light, weighing about two pounds.

The Rough-legged Hawk is a powerful hawk, flying at speeds of up to 60 miles per hour. It preys on small mammals, such as mice and voles.

The Northern Goshawk (Accipiter gentilis) is a large hawk with a wingspan of up to 3 feet. It is dark gray above and light gray below, with a barred tail. It is found in wooded areas across North America, including Illinois.

The female lays 3 to 5 eggs, which she incubates for about 30 days. The young hatchlings are helpless and are cared for by both parents. They learn to fly at about 6 weeks old.

The Northern Goshawk is a protected species in Illinois.

Hawks in Illinois Depending on Season

Hawks in Illinois During Winter

Although most hawks migrate south for the winter, there are a few species that remain in Illinois. These include Cooper’s hawk, sharp-shinned hawk, and red-tailed hawk.

While the winters in Illinois can be harsh, these hawks have adapted to survive the weather:

All of these hawks also take advantage of thermal currents to help them stay warm.

Hawks in Illinois During Spring

During the spring months, hawks primarily eat small birds and rodents. These animals are more active in warmer weather, making them easier to spot and catch.

Hawks also take advantage of thermal currents to help them stay warm. By circling on these currents, they save energy and stay aloft for long periods of time.

Hawks in Illinois During Summer

As summertime approaches in Illinois, so do the hawks. These birds of prey are a common sight in the state during the warmer months.

Hawks are well-adapted to summer conditions in Illinois. They hunt during the daytime when it is hottest, using their keen eyesight to spot potential prey.

To stay cool, hawks often perch in high places where they can catch a breeze.

During the summer months, hawks play an important role in controlling populations of small mammals such as rodents and rabbits. This helps to keep these animals from damaging crops and spreading diseases.

Hawks also help to keep the local insect population in check, which can provide relief for people who are struggling with summer allergies.

Hawks in Illinois During Fall

Hawks in Illinois, adapt their behavior to continue hunting and surviving throughout the fall season.

As the weather cools and these animals become scarce, hawks must change their hunting habits. They start to look for larger prey, such as rabbits and squirrels. They may even hunt in pairs or small groups to increase their chances of success.

To help them see their prey more easily, hawks perch in high places and scan the ground below for movement. When they spot an animal, they swoop down and grab it with their powerful talons.

As the days grow shorter and food becomes more scarce, hawks work harder to find enough to eat. But by using their keen eyesight and adapting their hunting strategies, they can continue to thrive during the fall season in Illinois.

In general, hawks in Illinois prefer open areas where they can spot their prey from a distance. They also need access to perching and nesting sites, as well as adequate food sources.

In Illinois, there are several different types of hawks that call the state home.

Some of the most common include the red-tailed hawk, Cooper’s hawk, and sharp-shinned hawk.

Red-tailed hawks are one of the most widespread hawk species in North America. In Illinois, they are found in both rural and urban areas. They prefer open spaces like fields and prairies but are also found in wooded areas and along waterways.

Cooper’s hawks are smaller than red-tailed hawks, but they are just as adaptable when it comes to their habitat. In Illinois, they are found in both forests and open spaces. They often perch in trees near wooded areas where their prey is likely to be found.

Sharp-shinned hawks are the smallest of the three common hawk species in Illinois. These hawks prefer dense forests where they can easily sneak up on their unsuspecting prey.

In conclusion, Illinois is home to many hawks. The most common are red-tailed hawks, Cooper’s hawks, and sharp-shinned hawks. These birds of prey are found in a variety of habitats across the state.