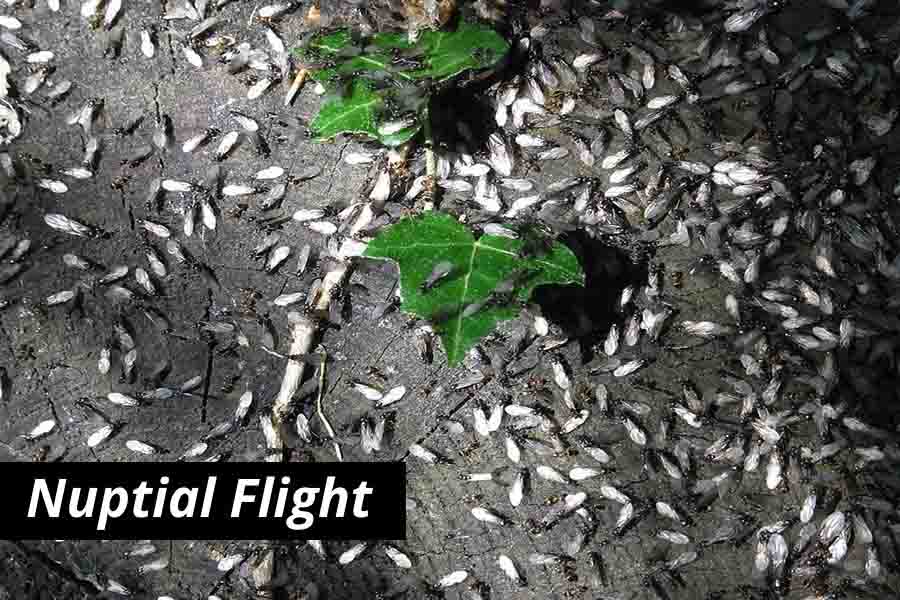 Nuptial flight is an event that takes place during spring, where virgin queens will take their first steps to start their own colony.

Taking part in this event are males and females who are winged and reproductively mature.

What Is Nuptial Flight?

Nuptial flight is when winged ants take to the skies above their colonies searching for a partner. It usually occurs during warmer months and can last anywhere from seconds, minutes, or hours, depending on the species of ant involved.

The nuptial flight takes place every year, where virgin queens will start their journey as new queens of their own colony.

Ants from all kinds of species will seek out a male who’s ready to mate.

When Does Nuptial Flight Take Place?

If weather conditions are right and the environment is hospitable enough for nuptial flights to take place, it can happen at many other times of the year though (mating flights have been documented as happening at any time of the year).

Where Does Nuptial Flight Take Place?

The nuptial flight takes place outside of the ant colony. The actual mating will take place during flight, where the queen will mate with several males.

What Happens After the Nuptial Flight?

The nuptial flight is an important event for the queen ant, but it doesn’t stop there.

After mating takes place during nuptial flight, male ants die and female queens must find a suitable nesting site to lay their eggs.

This is the first step for a new ant colony.

The Queen Starts a New Colony

For the females, nuptial flight is the beginning of her future job as queen. When she has taken part in the mating, she will fly off to find a nesting site. She will look for something that fulfills her criteria in terms of conditions, such as moisture or a place with plenty of nutrients.

The queen will store millions of sperm cells in their spermatheca, which she will use to lay eggs for the ant colony.

When the queen has found her nesting site, she will lay her first batch of ant eggs. The ants hatching from these eggs are called nanitics. The queen will have fed all of her stored nutrients to these eggs.

The nanitics decide the fate of the colony. It’s up to the nanitics to make sure that the colony gets off to a good start. They need to gather food for the queen, so she can lay more eggs.

If they can’t gather enough food, the colony most likely won’t succeed.

For male ants, nuptial flight is the end. Their purpose in life is to mate with a queen, whereafter they’ll die.

What Are Flying Ants?

Flying ants are reproductive ants – males and virgin queens. When a colony has grown big enough, and the colony is stable, the queen will start producing virgin queens and males.

Also read: Do ants have wings?

The males’ only job is to mate during nuptial flight, and queens will, usually, set off to start a new colony, but sometimes they can stay in the colony.

Flying ants are different from worker ants. They come from unfertilized eggs, and their jobs are, as said, to create new colonies. Worker ants are born from fertilized eggs. These ants are infertile females.

The first type of winged ant is the virgin queen ant. These are queens that haven’t mated yet.

Only virgin queens have wings, as they will shed these as soon as they have mated. The purpose of wings for queens is simply to let them take flight when nuptial flight occurs.

Male ants, also called drones, also have wings in order to take part in the nuptial flight. They don’t do anything for the colony – their purpose in life is simply to mate with virgin queens.

Nuptial flight gets rid of the male ants in the colony. When the nuptial flight is over, the queen of a colony will start to birth new drones.

How Long Do Flying Ants Live?

The lifespan of queen ants is determined by the health of the colony. If the colony is thriving, the queen will of course live longer, but if the colony dies, so will the queen.

Why Do Ants Fly?

Ants fly to mate during the nuptial flight. There are both male and female flying ants, and they both have different purposes.

After ants have mated, they can no longer fly. The males die and the queens will lose their wings, as they no longer need them when they’ve established their colony.

The mating itself takes place during flight. If reproductive ants didn’t have wings, they most likely wouldn’t be as many ants in the world, as they wouldn’t be able to find mates as easily.

This winged process is crucial for new colonies to be founded by the new queens.

Why Do Ants Swarm?

Many people wonder why ants swarm and what nuptial flight is. Nuptial flight, or swarming as it may be more commonly known, involves insects taking to the air in large groups of individuals.

In other words, swarming and nuptial flight are two terms for the same event. The mating ritual that ants take part in.

Ants flying into nuptial flights are winged males and females that are ready to mate. Most ant species that take part in nuptial flights do not mate multiple times throughout their lives, which means a nuptial flight is a large part of an ant’s mating routine.