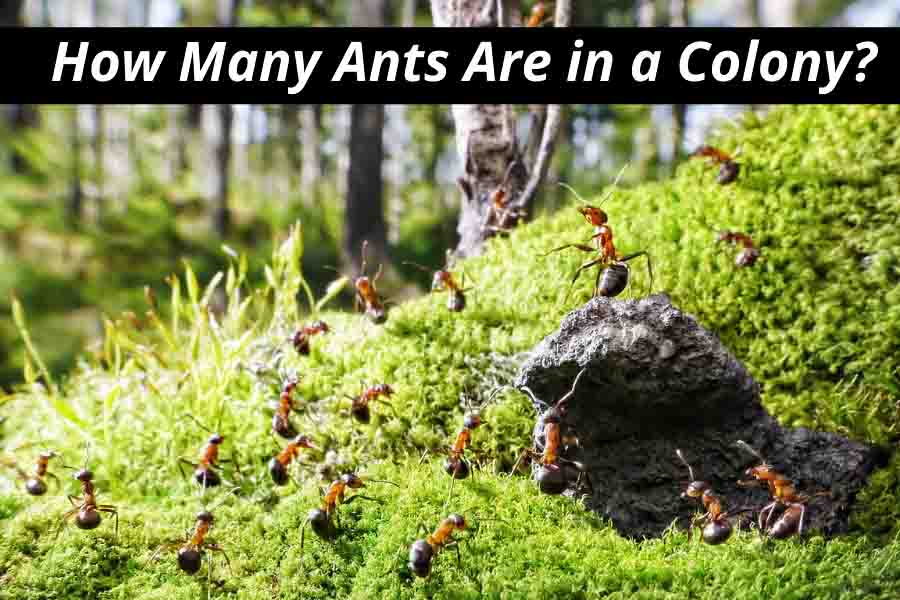 Normal ant colonies typically house anywhere between 1,000 to 100,000 ants while supercolonies can contain millions of ants that live together.

Colonies can be classified as either normal or supercolonies, which differ in how they function and how many ants there are per colony.

Ants are one of the most abundant creatures on earth, with an estimated 10 quintillion ants in existence.

This article will talk about how many ants there are in a typical colony, a supercolony, and how this number varies depending on the species of ant.

How Many Ants Are in a Colony?

An ant colony can house millions of ants. There is no definite answer to the question of how many individual ants make up an ant colony. Different species of ants have different sizes and habits when it comes to how they live.

Some species of ants can be very social while others prefer to keep their distance from the rest of the group (these would be considered solitary ants).

Because there isn’t one standard number for how many individuals make up an ant colony, scientists break down “how many” by looking at the area that particular type of ant covers with its nest.

The bigger the area covered with the nest, the more insects live together in the nest. Hence, a bigger nest means a bigger population.

How Many Queens Are in an Ant Colony?

There’s usually only one queen in a normal ant colony, but supercolonies can have multiple ant queens.

Ant colonies can range in how many queens they have. The number of queens is different based on the type of ant and how far along it is in its colony cycle (in some species, there are only one or two queens per colony).

How Many Worker Ants Are There in an Ant Colony?

There are two types of ants in an ant colony – worker ants and queen ants. Worker ants make up the majority of how many workers there are in a colony, with estimates ranging from 75% to 90%.

Queens usually account for about one-third of how many queens there are in a colony. The remaining numbers come from soldier ants, drones, pupae (insects that have yet to mature), larvae (the stage between egg and pupa), and other adults who take care of eggs or ants when they’re injured/need taking care of.

How Many Fire Ants Are There in a Colony?

How big a normal (or “normal-sized”) fire ant colony can get varies from how much food it has access to and how close together all its nests (hives) are.

Every ant nest is organized how the queen wants it to be, so every fire ant colony has its own unique traits and characteristics! Now that you know all about how many ants are in a normal or “normal-sized” ant colony, read on further for how many there are in a supercolony!

How Many Carpenter Ants Are There in a Colony?

Carpenter ants are another kind of ant, which live in colonies. The size of a carpenter ant colony can be up to 100 thousand individuals. There aren’t many predators who have what it takes to kill all these ants at once.

How Many Black Ants Are There in a Colony?

It has been estimated that black ant colonies can contain up to one million workers (not including larvae). Just like any other ant colony, the black ants are split into different categories of ants (queens, workers, and so on).

Supercolonies are very large colonies, with millions of ants.  These supercolonies can span enormous areas (the largest observed is over 6.000 kilometers), and they use chemical communication like other “normal” ant species.

A supercolony is when two or more separate colonies, that have formed near each other over time, unite and create one massive group with multiple nests within its borders instead of just one main nest like regular ant colonies.

Amount of Ants in a Supercolony

In a typical ant colony, there are about 100.000 to 250.000 ants while supercolonies can have millions of members.

In a normal ant colony, there is one queen who’s responsible for reproduction. The workers are sterile females who help maintain and expand the nest, forage for food, care for larvae, defend against predators, etc.

However, in some species like Argentine ants (Linepithema humile), there can be multiple queens per colony making these “superorganisms” or supercolonies that extend over many miles with millions of individuals.

It turns out colonies within supercolonies don’t fight because they actually create genetic diversity through cross-fertilization between different nests; this creates stronger colonies that respond to threats more quickly.

These numbers vary depending on the species and how many queens per nest but it’s clear that colonies, whether they be normal or super, need a lot of workers to keep them going strong.

Queens in a Supercolony

Since supercolonies are made up of different colonies uniting, there will also be multiple queens – one (or more) from the individual nests that combined.

Each queen ant will lay thousands of eggs during her lifetime. When these ants grow up they can help the colony in many different ways, including foraging and caring for the young.

Supercolonies comprise multiple nests that share resources across long distances (up to 100 miles). It’s not uncommon for an individual nest to belong to several colonies at once; this creates enormous networks of insects.

Multiple species have been known to form supercolonies. These are [2]:

How Many Types of Ants Are in an Ant Colony?

There are several different types of ants that live in an ant colony. The most important type is a queen with two lesser types being workers and soldiers.

The most common type is the worker ants. They are responsible for building, foraging, gathering food, keeping the nest clean, and other maintenance tasks.

Soldier ants typically protect the rest of the members of the colony by fighting against any predators who may come near them such as spiders, mites, lizards, birds, and even people.

How does the colony communicate?

Ants communicate via chemicals called pheromones through chemical trails for food gathering or how many eggs they should lay based on how much food is available.

These trails are how the ants communicate with each other to get things done for their colony and how they will find food or create new nests if necessary.

A queen ant is the only fertilized female member of a colony. There’s only one at the beginning of the colony, though sometimes several queens can coexist peacefully.

They are responsible for laying eggs and reproducing the next generation of ants that live within their colonies. Queens require special attention from workers – this includes feeding them regurgitated food (trophallaxis) which helps her produce eggs at faster rates than normal.

Worker ants are usually the smallest members of an ant colony. They do most of the work around the nest, including foraging food and caring for larvae.

Every day, workers can cover a great amount of distance while carrying loads equal in weight to themselves. Workers make up most of an ants’ total population.

Males make up a very small percentage of an ant colony. They do not actually do much in a colony. Males will leave their colony to mate once it’s mating season. This ritual is also called a nuptial flight. This is when queens and males meet to start new colonies.

What’s the Largest Ant Colony in the World?

The largest ant colony in the world is an Argentine ant supercolony. This specific type of ant lives almost exclusively on southern islands, but there are other types of colonies around the globe. The biggest one was found to have over 300 million individuals living within 750 miles!

Do All Ants Live In Colonies?

No, not all ants live in colonies. There are about 12,000 different species of ant and only around 25% of them form colonies. Some ants like the carpenter ant will make nests outside while others like fire ants can be found living underground.

Most ant colonies vary greatly in size depending on how many workers there are. For some small groups, it may only consist of a few dozen to over one hundred thousand but typically most have between 50.000 to 250.000 members.