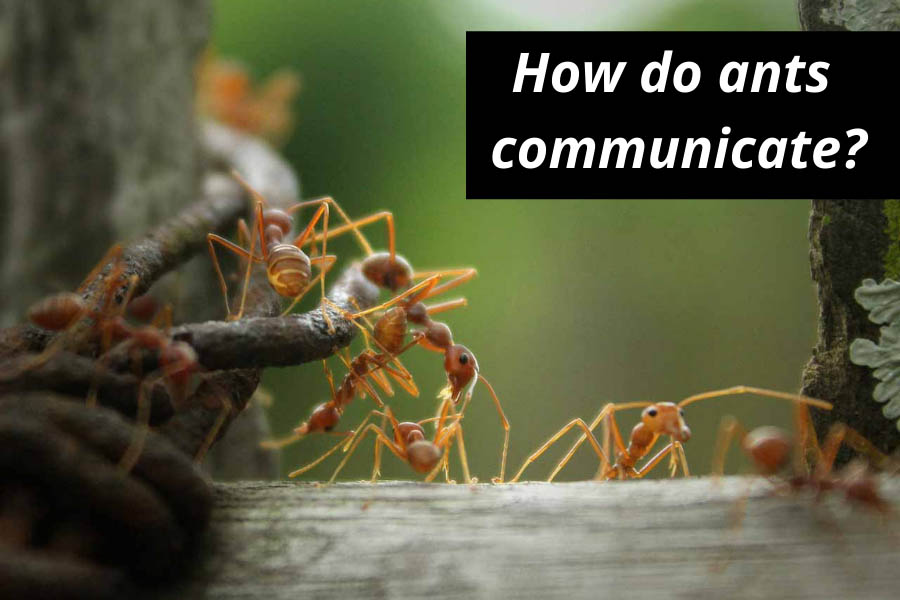 Ants have a complex communication system that is based on pheromones.

They use these chemicals to tell other ants how to behave and what to do. These chemical signals are used for such things as marking their territory, telling each other which route is the best way home, and even how much food there is at any given location.

Like most animals, ants also communicate through body language, smell and touch. They will tap or grab another ant with their antennae in order to get them moving in the right direction if they need help finding an escape hole from a predator or if one of them has found something delicious.

Lastly, they also can send messages with their antennae by tapping or grabbing another ant with it. This could be done in order to get them moving in the right direction if an ant needs help finding an escape hole from a predator or when one finds something delicious!

Pheromones are chemical signals that ants use to communicate [1]. Ants will secrete these pheromones when they are in danger or under other stressors so other ants can smell them and help out. Many species of ants will give off pheromones as a warning signal.

They will also leave their own scent trails to food and other resources they use frequently.

If one ant finds a food source, it will leave some pheromones behind to let other ants know how to get there.

Ants also use things like touch and body language as part of their communication system. They communicate how they feel about each other through stroking or tapping with their antennae.

Ants can even tell the age of another ant by how many times it taps its partner’s antennae!

The number of taps signifies how well-nourished an individual is at that moment in time which helps determine if they are healthy enough to take care of eggs or young ants back at the colony!

Ants communicate in other ways too! Some of these techniques are used for specific reasons, like how they interact with the queen ant or how they warn each other about danger.

For example, ants also use sound to communicate with one another by rubbing their feet over leaves and twigs; this noise can be heard up to 100 feet away.

Ants also use vibration to communicate, and how they do it is pretty cool! When ants walk over a plant’s leaves or twigs, the vibrations caused by their feet can be felt through the ground.

Ants also communicate by smelling each other’s antennae, where the chemicals are transferred to one another! Ants’ antennae have special receptors that can identify how old an ant is and who it belongs to.

Ants communicate through a variety of different sounds. These include “howls”, wiggles, and even stridulation. Ant “howling” is actually used to signal danger or alarm. The howl can be heard from up to 100 feet away.

Ants also communicate through wiggling and stridulation as well as other sounds. They do this to warn each other of danger or just how they feel about another ant. This behavior is often seen when ants are under attack!

Ants communicate by how they move their bodies, how fast or slow an ant moves can signify the type of message being sent. For example, if an ant is moving quickly it signals that there may be danger nearby and other ants should get away from the area.

If a worker ant finds food its body language communicates to other worker ants how far away the food is. The closer the ant moves to its head, the lower it holds its body, and how fast or slow other ants crawl around can communicate how close they are to finding food.

Ants also use their antennae as tools for communication. Antennae act like hands by picking up objects and touching them together so that an ant can communicate how big an object is.

The antennae also help ants communicate how far away another ant is if they are friends or foes,s and how fast they need to flee from danger.

Ants communicate through touch, too! Some ants will grab onto other worker ants when they come near so others know how far away they are and how much time it takes them to get where they’re going.

This is why you might see ant trails of hundreds or thousands of insects all walking in the same direction. This is how ants communicate how far away they are so others know how to follow.

Ants will also use their antennae as tools for communication. Antennae act like hands by picking up objects and touching them together so that an ant can communicate how big an object is. Antennae help ants communicate how fast they need to flee from danger, too!

Trophallaxis is how ants communicate through food exchange. This means that one ant will regurgitate the food they have consumed in order to share with other ants.

This allows the ants to share nutrients that they might not get on their own. Sometimes, however, this can be how disease spreads among ant colonies so it’s important for them to identify how healthy an individual is before allowing food exchange. Trophallaxis also occurs when young are being fed by adults or between adult members of a colony who have no offspring.

Why Do Ants Stop When They Meet?

When two ants meet on a trail, they will stop and smell each other. This is how the ant knows how old another individual is as well as how healthy it may be. If an ant smells like its illness or disease, it signals to the other worker that this individual should not be allowed through because of possible contamination.

Ants communicate in a variety of ways. They use visual cues and smell to identify each other. If you see ants following another ant, it is most likely because the leader has discovered food or shelter and they are following him/her back to their home base.

Why Do Ants Run Into Each Other?

Why do ants run into each other? Ants are skilled at navigating inside their anthill. If they bump into an object, how does the ant know where to go next?

Ants communicate with one another through pheromones. These chemical signals can be used by ants for many different things – including how to get back home after being out in a field all day! The queen also uses these chemicals to keep track of how many eggs she has laid and when new workers need to take over the egg-laying duty.

No, ants aren’t telepathic, even though they can’t hear, but they do have incredible communication skills. What may look like telepathy, when ants move in sync, is a mix of communication with antennae, feel of vibrations scents, and other communication methods.