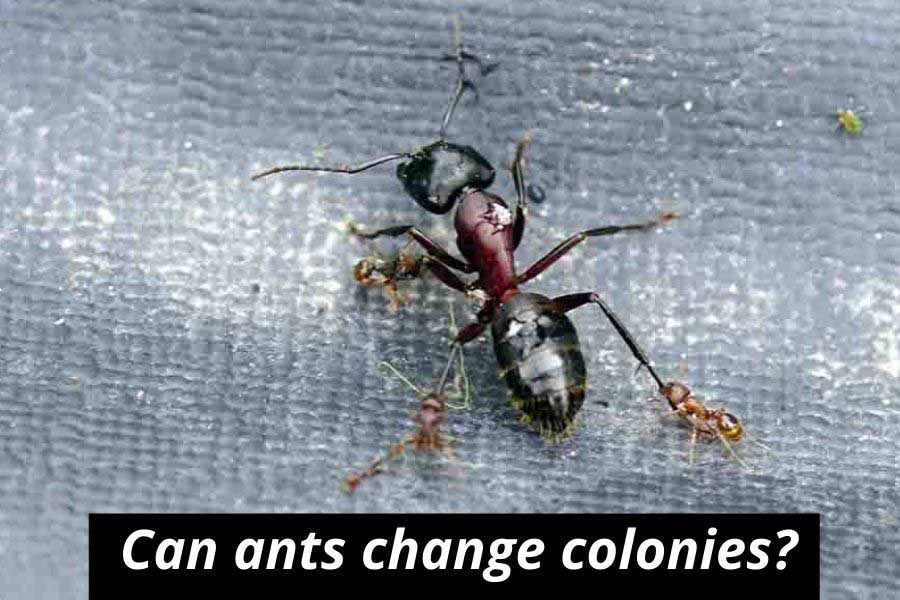 If an ant gets lost, loses its colony, or if its nestmates all die, can it change colony?

That’s a good question – and one we’ll explore more in this article.

The short answer to this question is “no” – but it’s not always that simple. Read on to find out what happens to ants without a colony.

Ants usually can’t change colonies, but it has been seen before within certain species. Ants from these species can join other ant colonies. This will happen if workers are lost, orphaned, or for some other reason alone.

Ants in an ant colony will have something referred to as “Passport Pheromone”. This is a specific scent that ants within a colony have, which helps them identify which ants are family and which are invaders.

Since outsiders won’t have the same scent, these outsiders will usually be killed – though sometimes they can get lucky.

When Do Ants Change Colonies?

Ants would only change colonies under very extreme circumstances. This could be:

But, as said, ants can’t just bounce between colonies. They will have to be accepted into the colony, which is a difficult task.

Can Ants Join Other Colonies?

No, ants usually can’t join other colonies. A colony is a family, all born from the same mother. This gives them a very close “relationship” with the rest of their colony. Ants are very protective creatures, and won’t just let an outsider into their colony.

Outsiders seeking access to a new colony will most often be killed.

A colony can be made up of millions of ants. A regular colony is made up of:

In the case of a regular colony, since there’s only one queen, she’s never able to leave her post. If she does, the colony will die out. But since there are plenty of workers, the colony can easily spare one or two without taking damage.

That’s why it’s only workers that can go explore.

How Many Ants Are in a Colony?

A regular ant colony will have between 100.000 – 500.000 ants. Some can even reach millions if they are living in an area with plenty of food sources and warmth.

There can be more than one queen and many workers in a single colony. If you start to see multiple queens, you’re dealing with a supercolony. These colonies can have many million workers, as there will be multiple queens laying eggs at a time.

Read more: How many ants are in a colony?

What Happens to Ants When They Lose Their Colony?

Ants who lose their colony will die (most of the time). If they’re out foraging, and suddenly lose their trail back to the colony, will be doomed. They’ll probably look for the way back, but the chance of them stumbling upon the colony will be very small.

One way out for them is to join another colony – but as discussed, this is highly unlikely. First, they’d need to find another colony of the species as themselves. This is just as likely as the ant finding its own colony. Second, the ant would need to be accepted, which is, again, very unlikely.

What Happens When Ants From Different Colonies Meet?

When ants from different colonies meet, they will either fight each other, ignore each other or try to avoid each other, depending on the species crossing paths.

Now, if the two colonies are of different origins, they will most likely end up fighting or retreating. The most common response is fighting though.

What Happens if You Move an Ant to Another Colony?

If you move an ant to another colony then it can either be accepted or rejected. If the new colony doesn’t have enough food sources, shelter, and warmth for all ants in the colony, the new ant will surely be killed. But on very rare occasions, they will be accepted.

What Happens When an Ant Colony Is Disturbed?

If an ant colony is disturbed, it can cause the ants to change colonies [3]. They can also choose to fight whatever is disturbing their home.

Do Ants Kill Other Colonies?

Ants are known to fight other colonies. They do this so for different reasons, the two major ones being territory and food. If ants feel threatened by another colony, either because they’re taking their food or territory, they will go to war against each other. This is a very aggressive and direct form of confrontation that happens a lot within the ant world.

No, ants don’t abandon their colony. Scout ants (workers looking for food), will temporarily leave to forage or gather food, but they won’t leave their colony for good.

Can One Ant Start a New Colony?

Yes, but only a virgin queen ant. When a new queen is born, she will wait for her nuptial flight. Once it’s spring, all of the virgin queens and newly born males will take flight to look for a mate. When a virgin queen has mated with a male, she will start looking for a place to start a new colony.

This is how a new ant colony starts. The queen will lay her eggs, grow her colony, and will eventually give birth to new virgin queens. Then the cycle will start over once again.