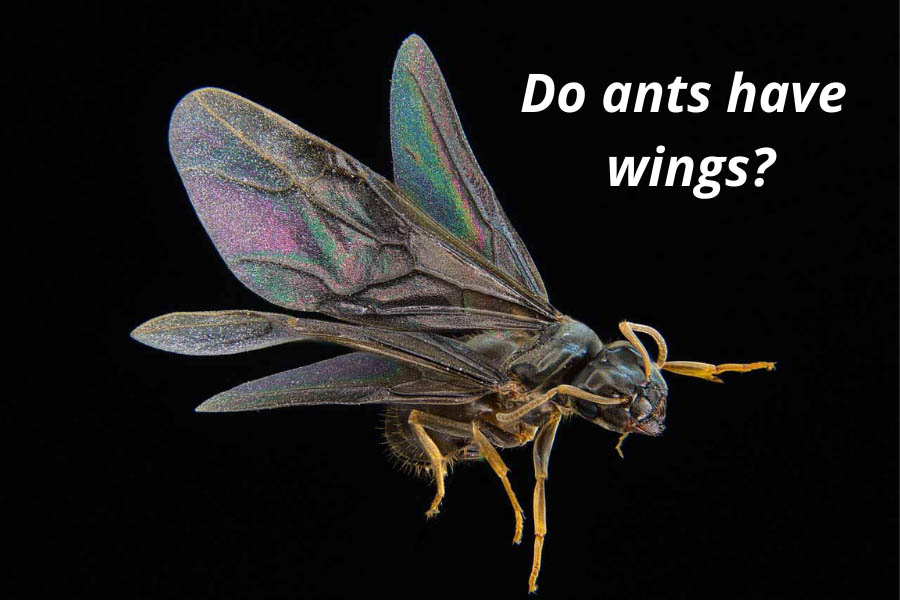 The flying ant is a member of all colonies. These are virgin queens and males who have yet to mate. These insects are called flying ants because they can fly, unlike most other types of ants which cannot.

The flying ant’s wings allow them to take flight. They do this when they mate during the nuptial flight. Flying ants can be found in ant colonies when the colony is big enough.

How do you know if you’re dealing with winged or non-winged flying ants? Read on to find out!

Also read: What causes flying ants in your home?

Do Ants Have Wings?

Yes, flying ants do have wings, but the majority of ants do not.

There are specific types of ants that have wings within regular ant colonies. These are the new queens and males that haven’t engaged in nuptial flight yet.

Which Ants Have Wings?

Ants with wings are also called “alates”, and refer to sexually mature ants. This means they can reproduce. You can also call these reproductive ants.

Underneath we’ve gone into detail about the two types.

These ants are flying reproductive males of the species. These flying ants have wings, so they can fly to other colonies or take flight during the nuptial flight.

Male ants don’t really have any other purpose than to mate with sexually mature females.

The flying ants that most people see and find so annoying are the reproductive female flying ants. They typically fly during warm weather, such as in spring or summer, but they can be seen flying at other times of the year as well.

The reproduction females have wings with a similar appearance to those found on winged male flying queens; however, their bodies are larger.

After the females have mated, they will shed their wings, and will no longer be able to fly.

Why Do Some Ants Have Wings?

Ants have wings to make it easier for them to reproduce. The ability to fly makes it easier to find a mate. Imagine if ants had to travel by foot in order to find a suitable mating partner – most ants wouldn’t make that journey.

Some flying ants have wings because they are a different species than normal ant workers. These flying ants can actually fly to new places, which is something the rest of the colony cannot do, and then create their own colonies.

These flying ants have a chance to reproduce and do their part for the colony.

Ants fly during mating or nuptial flight. During the flying process, virgin queens and male alates (winged reproductive males) fly away from their colonies to mate. The flying period begins in the warm hours of the afternoon when a large number of flying ants can be seen around your home.

Worker Ants Will Never Get Wings

One thing that people are often confused about is whether worker ants have wings.

Worker ants will never get wings because they do not need them – the only flying ant is the queen and she uses her wings for reproduction purposes (i.e., mating with male flying ants) and flying off to start a new colony.

Don’t Mistake a Termite for a Flying Ant

Ants flying around your home could be a terrifying sight. However, flying ants are not as dangerous or destructive as flying termites.

Termite wings look different from ant wings and their sizes vary depending on the age of the flying insect. Identifying flying insects can help you determine if there is a bigger problem at hand.

What Is the Difference Between Flying Ants and Termites?

While both types of insects belong to the order Hymenoptera, which includes wasps, bees, ant queens, and many other flying creatures, flying ants can be distinguished by their wings, that is larger in the front than in the back, while termite wings are uniform in size (as well as a few other characteristics).

Another difference between the two is that flying termites keep their wings for life while flying ants only have them during a brief period in which they can use them to find a mate.

After mating, female flying ants shed their wings and live the rest of their lives without the need to fly. Male ants die after the nuptial flight.

An ant’s wings are attached to the second segment of its body. When flying, it holds them tightly against the backside of this segment so that they do not break off or get in its way when flying.

Flying ants have two sets of wings – both long and short ones. Their front legs are also much shorter than their other six legs, which is done on purpose to prevent flying ants from getting entangled in their own wings.

Ants with wings have them for the single purpose of mating. This is why flying male ants have a very short lifespan – after the mating, they die quickly. The queens can also only fly for a short period of time, as they shed them after the nuptial flight.

How to Get Rid of Flying Ants

Flying ants are a nuisance, the flying form of an ant species. They arise when colonies grow too big and queen ants leave to start new nests with flying males and females in tow.

One way to get rid of flying ants is to be patient, wait until they fly away on their own.

Read more in our article: How to get rid of flying ants

Another way would be to take care of the colonies that are responsible for flying ants in your area (so you do not end up with flying ant issues again). You can spray them directly with ant-killing remedies or coat surfaces where they like to hang out (such as window sills) with an insecticide.

The flying ants will carry the poison back to their nests and kill off entire colonies.

There are also a number of natural remedies to get rid of ants with, but these don’t always work – especially for flying creatures, as they can easily fly around your defenses.

If nothing works, the safe bet is to call an exterminator. No matter the type of bug you’re dealing with, they will always know what to do.