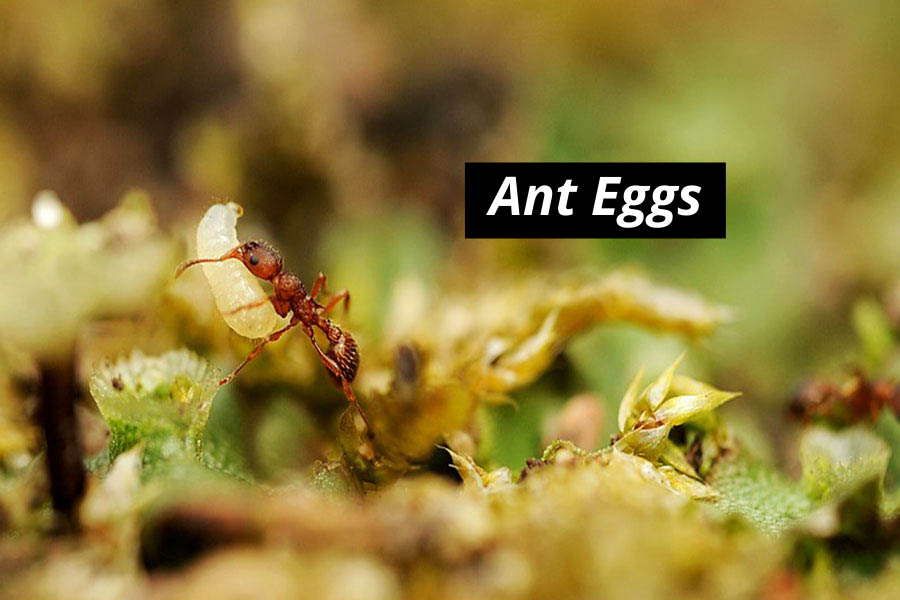 Ant eggs are an important part of ant life, but what do they look like? How do they develop? And what can you do with them?

In this article, we’ll go into more detail about ant eggs, some interesting facts, and what to do with them.

Ants lay their eggs in the ant colony’s underground nest. From here they go through different stages, ending up as full-grown ants.

There are many different types of ant species that can be found around the world, and each type has a different shape for its ant egg. Some ant eggs may resemble small grains of rice or seeds while others may be shaped more like beans.

What Are Ant Eggs?

Ant eggs are the ant’s way to reproduce. Queens lay their fertilized eggs in a warm, safe location that is protected from predators and other ants.

The Queen ant will excrete a sticky substance that forms an envelope around the ant eggs to protect them while they develop into larvae. This stage of life for ants is called “larvae”.

The ant larvae are like embryo humans, their bodies at this stage of life are used to store nutrients and grow.

Ant eggs are laid by ant queens. In most ant species, ant eggs look like tiny ant larvae—they have a small white or yellowish-white round body and no legs.

If you’ve ever seen the “ant farm” toys that let you watch ants dig tunnels and build their nests, these ant farms give a great view of an ant egg.

Ants usually lay dozens to hundreds of them in each nest. The number varies from species to species; some individual colonies may produce many more than others, especially when environmental conditions aren’t as good as they should be for growth.

How Are Ants Born?

Ants are born from eggs, which are laid by the ant queen.

New ant colonies can be formed when a queen ant finds an ideal nesting site. Generally, the female ant will create her own colony if she has just mated with a male and (this mating is seasonal and is called nuptial flight).

In this first batch of eggs, the queen will only lay a dozen or a couple dozen eggs, since she won’t have the nutrition to lay any more.

Ant queens that have not yet found their nests lay thousands of eggs at once; however, these eggs all lack the mature features beyond larvae stages (i.e., they resemble maggots).

These larval forms are fed by the worker ants in the colony until they’re ready to go onto their next stage.

Ant eggs are the eggs laid by ant queens. The ant egg is a small white oval-shaped object, and it varies in size depending on the species of ant.

Ants lay their eggs inside a special chamber called an ant colony or an ant nest where they will be cared for until they hatch into larvae. After that, the ants feed them with food from other insects which have been killed by worker ants before being brought back to fill up storage chambers within the nests/colonies.

In some cases, baby ants eat bits of what their mother has eaten when nursing because there’s not enough food around sometimes to support multiple mouths especially during lean times when prey becomes scarce!

As larvae, ants are still not able to do much, and still, need a lot of care from the other ants in the colony.

Ants can spend up to a month in their ant pupa form before they emerge as an adult ant.

This is the final stage of metamorphosis, and it takes place inside an ant’s cell that has been prepared by worker ants. The ant will spin itself a cocoon from silk produced by its salivary glands during this period, where it will stay until adulthood.

Ant eggs are about 70% ant fat. Ants have the highest fat content of any insect, which is why ant bodies are so small but can still do so much work.

The ant’s body consists mostly of a stomach and an intestine with little muscle or bone tissue. This means that they need lots of food to survive since they burn energy at such a high rate.

How Do You Kill Ant Eggs?

Ant eggs are more difficult to kill than ant larvae. The ant eggs of some species can be killed by boiling them in water, but this is not an effective method for the ants that build their nests underground or inside trees.

You will need to use a pesticide kit if you want to destroy ant eggs completely. Ants lay their egg sacs on top of the soil, so it might help you out if you dig up all your garden and put down new soil which has been treated with pyridaben, diazinon, or propoxur (all pesticides).

If there is already an ant queen living near your house, then she will quickly start laying her own ant colonies once her existing colony dies off.

How Does Ant Reproduce?

Ants only need a queen to reproduce. She takes care of the entire process (after the initial nuptial flight).

After she’s established her new colony, the workers will take care of almost everything. The Queen only has to focus on expanding the colony and adding new workers to the workforce.

Where Do Ants Lay Their Eggs?

Ants lay their eggs in ant nests. The ant nest is a home for ants and where they keep their ant larvae–the ant’s babies that hatch from eggs!

How Long Does It Take for an Ant Egg to Hatch?

Ant eggs typically take around 12 days to hatch [1]. However, ant eggs have been known to stay dormant for up to thirty-five years before hatching! Ants are so resilient and the gestation period is a perfect example of that. Some species even produce ant eggs without fertilization from males by parthenogenesis. These ant eggs will only be able to create female ants – but they can do it on their own!