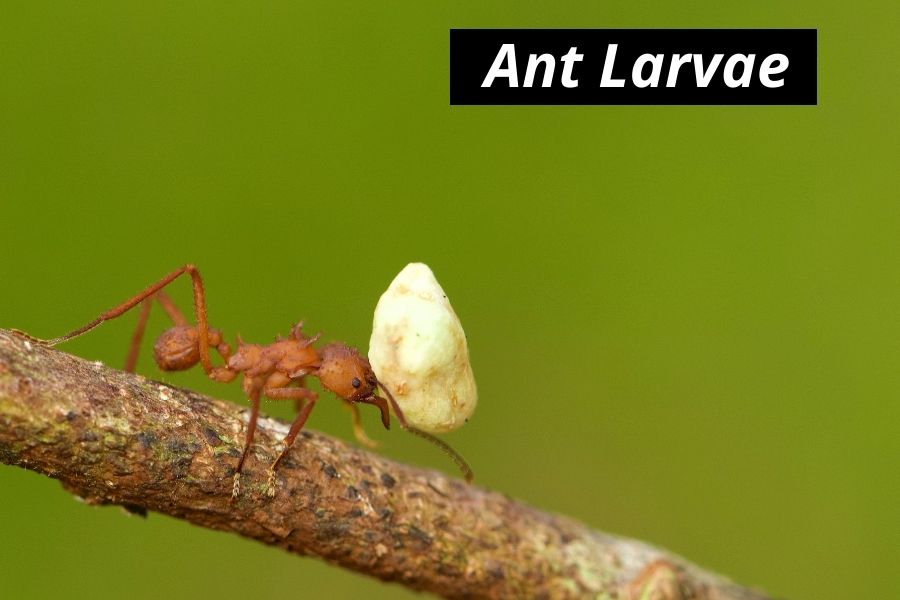 Ant larvae are the second stage of ant development.

Ants go through a complete metamorphosis from egg to larva to pupa before becoming adults.

In this article, we’ll go in-depth with ant larvae, what they look like, how they survive, and more.

What Are Ant Larvae?

Ant larvae are ant “babies” that hatch from ant eggs. The egg hatches into a larva which then turns into pupae before finally turning into an ant.

Ants go through four stages of life. The first stage is the egg phase where they stay in their eggs for around two weeks before hatching into ant larvae. Ants then become ant pupae which last almost one month. Then they become adult ants.

Ant larvae look like small maggots, and they look very similar to ant pupae, just smaller. Both ant larvae and ant pupae have a white, waxy coating on top of their bodies that makes them appear white or yellow-ish in color.

In addition to this, Ant larvae don’t have fully developed muscles or wings which they later develop as adults.

Carpenter ant larvae are small, white maggot-like creatures. They can’t survive on their own, which is why workers feed them a mix of solid and liquid food.

How Long Does It Take for Ant Eggs to Become Ant Larvae?

Ant eggs hatch into ant larvae after 7-14 days. The time that ant eggs take to turn into ant larvae depends on the species of ant, as well as factors such as temperature and food availability.

For example, in some ant species, it only takes around one week for ant eggs to become ant larvae while other types may take 2 weeks.

If the colony is in a colder area, the process of turning into ant larvae may also take longer. Ants need heat to develop, hence why it takes longer during colder times.

It typically takes about 12 weeks for ant eggs to become a fully grown ant when conditions are optimal (i.e., temperature between 75 to 95 degrees Fahrenheit and plenty of food available for the growing ants). However, this process can take longer than 12 weeks if conditions are suboptimal.

Cared for by the Worker Ants

The worker ants take care of the ant larvae, feeding them with food from their own body and cleaning them until they become pupae. When the ant pupa turns into an adult ant, it leaves the colony to meet other adults in their search for a mate.

Since ant larvae can’t move around or care for themselves, they’re very dependent on the workers in the colony. If a larva isn’t cared for, it will simply die.

What Food Do Ant Larvae Eat?

These ant foods include the regurgitated body fluids of ant workers, which provide all their nutritional needs for survival and growth.

The worker ants and the queen can also feed on the larvae. This process, called Larval Hemolymph Feeding [1], happens when an ant feeds on hemolymph from the larvae. As long as this isn’t done too often, the larvae can survive this without any problems.

It’s believed that Larval Hemolymph Feeding takes place when there are food shortages within the colony, or when ants want to synchronize larval development – simply to synchronize the development on all larvae born at the same time.

From Ant Egg to Ant Larvae

Ants start off as ant eggs. When ant eggs are first laid they stay inside the ant colony where ants care for them until they hatch into larvae. These ant larvae look like little white worms with no legs and a long skinny body similar to that of an earthworm.

Once ant larvae have grown big enough, after about two weeks or so, ant larvae then turn into pupae. The ant larvae will spin silk cocoons to further grow into adult ants later.

After another few days in the cocoon, ant pupae emerge as worker ants, ready to take part in sustaining and growing the colony.

How Are Ants Born?

Ants are born from ant eggs. Later they turn into larvae. Ants go through a metamorphosis stage called pupae, which turns them into adult ants.

Ant larvae look like ant pupae but are much smaller and have a darker color to them. Most ant larvae stay in their larval stage for up to eight weeks before pupating, which makes the ant mature into an adult and with all of its body parts (head, thorax abdomen). Adult ants develop very quickly during this time and they molt their ant skin several times as their body grows.

Ant Pupae: The Next Step

After having been a larva, an ant turns into what’s known as a pupa.

For example, carpenter ants and fire ants both have ant pupae that are a yellowish color with black eyespots, but their ant larvae looked very different from each other.

Ant pupae are usually white at first, but they turn into a brownish color just before becoming adult ants.

What to Do if You Have Ant Larvae in Your House

Ant larvae will stay in the nest. They can’t do anything and need to be taken care of, so if you spot ant larva in your house, it means there’s a nest nearby. Ants might’ve nested in your home and have begun moving their younglings into the new nest.

Your problem isn’t the larvae, but the rest of the colony.

There are several ways to deal with this problem:

The different ways to deal with ants work for different sizes of infestations. If you have a serious problem on your hands, we recommend calling pest control.

How Do You Kill Ant Larvae?

Ant larvae can be killed just like adult ants. You can either use natural remedies, such as boiling water, or you can use pesticides. If you kill the worker ants, the larvae will die off though, as they’re not able to care for themselves. They’re fully dependent on the workers taking care of them and feeding them.

Where Do Ant Larvae Live?

Ant larvae live deep inside the ant nest. Here they’re protected and cared for by workers. Ants start as eggs, hatch into ants and then turn into pupae before becoming full-grown ant workers.

Where Do Ant Larvae Live?

Yes. Ants’ eggs hatch into what’s known as ant larvae. When ant larvae first hatch they are very small and white. They also grow longer and bigger like a worm – at this stage ants look nothing like the adult ant we know.