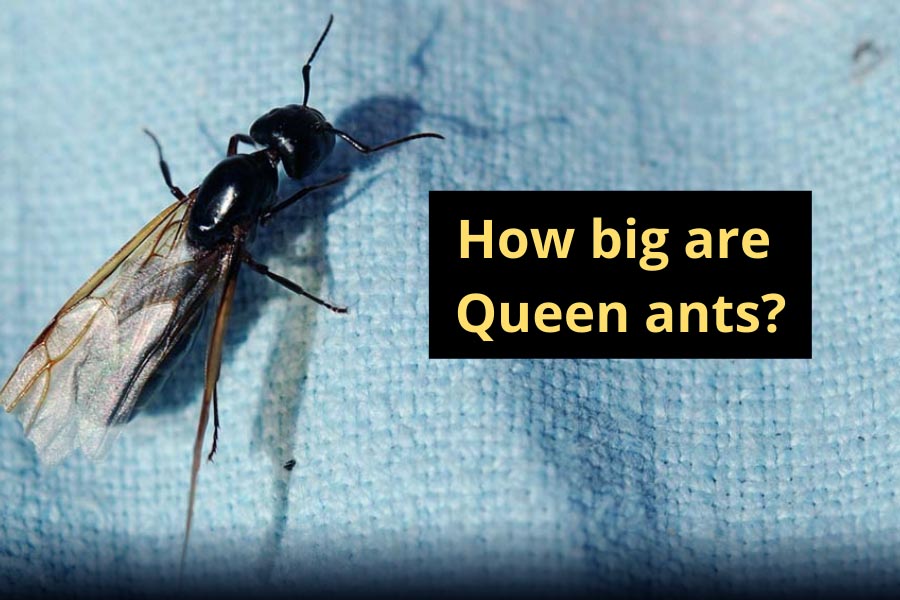 Queen ants are on average 8 mm (0.31 inches) long but can get as big as 52 mm (2 inches). The queen is usually twice the size of a worker, but there are some exceptions.

Queen ants are the biggest in a colony.

They also have wings that they use to fly in search of new habitats when their old one becomes too crowded with other queens and workers.

In this article, we’ll talk more about the reason behind how big queen ants are, how to identify them, and how big they can get, even though it varies from species to species (some queens can be 8 mm long).

How Big Are Queen Ants?

The size of queen ants varies depending on the species. A general rule of thumb is that the queen is between 2 to 4 times bigger than regular worker ants.

A good example of a big queen ant is the Carpenter ant.

Carpenter ant queens are typically 13 to 17 mm long and can be dark brown, yellow, red, or black in color, depending on the subspecies.

After mating with the male carpenter ant, the queen loses her wings and searches for a new nesting location for her offspring. To start a new ant colony, the carpenter queen ant favors wet and rotting wood.

Also read: How tall are ants?

Why Are Queen Ants So Big?

There are a few reasons why queen ants can be so big:

The colony’s environment also affects how large or small the queen and her colony is; warm climates produce smaller colonies with longer life spans, while cold environments generally lead to larger colonies and shorter life spans.

How to Identify a Queen Ant

It can be difficult to identify queen ants if you’re not an expert, but a few things make them stand out from other types of ants.

The simplest method to spot a queen ant is to search for one with a bigger thorax, or center part, than the other ants. Because the queen ant is born with wings, which she uses to leave the colony to mate, she will develop a muscular, more complex thorax.

A Queen Ant Is Bigger Than Regular Ants

A Queen Ant will be significantly bigger than regular worker ants. This is partly because the queen has to lay all of the eggs herself.

As mentioned, if you ever come across an ant that is twice the size of every other ant in the colony, it will most likely be the queen.

Because ants mate while flying, both males and young queens have wings. The queens attempt to build a new nest after they’ve mated.

The queens also lose their wings when they’re done with mating.

Winged ants are swarming ants that want to reproduce and breed. Flying ants can be male or female (the queen). Both are reproductive ants looking to marry and breed the next generation of ants to ensure their colony’s survival.

The majority of the queen ant’s eggs hatch into wingless, sterile female ants known as workers. Winged male and female ants are occasionally formed to mate. Males die after mating, and females, in many species, shed their wings and create new colonies.

A Queen Ant Will Have a Bigger Thorax

Queen ants have a bigger and thicker thorax than worker ants. Because the thorax of a queen ant formerly supported wings, it will be considerably thicker and more muscular than the body of a worker ant.

The thorax of a queen accounts for more than half of its total body size. This is significantly bigger than a typical ant’s thorax.

The Queen Ant Will Often Have a Large Following

If you notice a bigger ant with a swarm of lesser ants crawling on or around her, she is likely a queen. The queen is often situated in the middle of the ant colony. She’s well-defended by the army of ants and usually tough to reach.

If the queen dies, so will the colony. That’s why ants are so protective of their queen and will sacrifice themselves in order to save her. Whether it’s from external danger or if it’s saving her from starvation.

The Important Role of a Queen Ant

They are trained from an early age to start a new colony. After leaving her birth colony and mating, this young queen will seek out a new nesting location and deposit her first batch of eggs.

When those larvae have developed and can care for her, the queen shifts her attention to the next stage of her life: becoming an egg-laying machine. In fact, some queens have been known to lay millions of eggs in their lifespan.

If the queen ant dies, there will be no one left to lay eggs, and the colony will die.

It should be noted that, despite her regal title, the queen ant has little real power over her colonies. She does not make choices for the colony or command other ants.

Instead, like every other ant in the colony, she is motivated by instinct and a broad understanding of how she might meet the colony’s requirements. The only royal treatment she receives is that other ants bring her food and keep her clean.