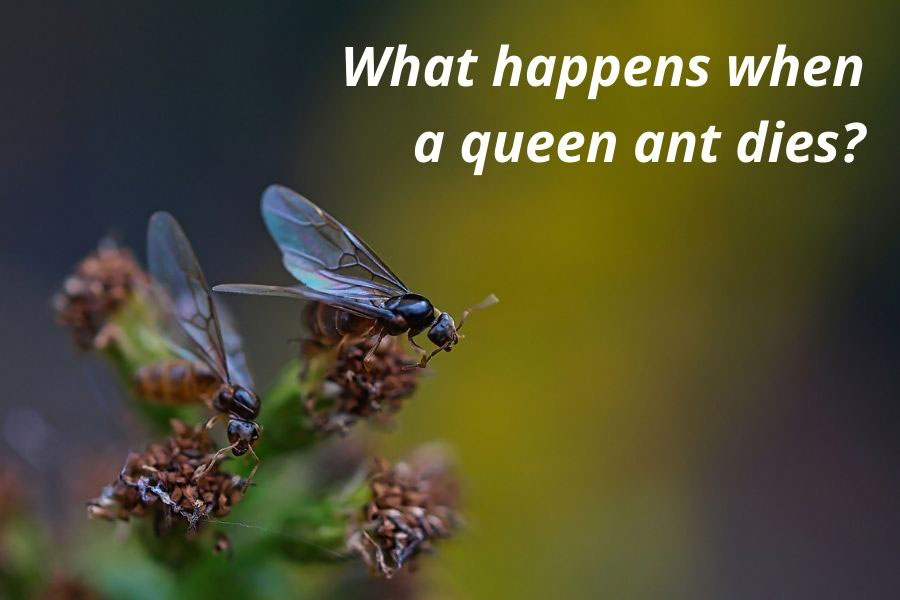 Ants are social creatures with a distinct social hierarchy, the queen being the most important member of the entire ant colony.

The worker’s most important job is to protect the queen and keep her healthy.

The death of their ruler can be fatal to the colony – but can they survive afterward? What exactly happens?

That’s what we’ll explore in this article.

What Happens When a Queen Ant Dies?

The queen ant alone is responsible for reproduction. When the queen dies, the colony will die out. There will be no one left to birth new eggs and ants, as workers aren’t capable of this.

Now, even though that’s what usually happens, it’s not always the case.

Some colonies, supercolonies, have multiple queens in a single colony. If this is the case, the colony will be able to live on, as the other queens can carry on expanding the population.

Now, Indian Jumper Jacks have a different approach. In a study [1] it was discovered that these ants can shrink and regrow their brain. They can use this mechanism to transform themselves into “gamergates” – a queenlike form.

If the queen dies, females of the colony will fight each other to find out who should be the new queen. While this goes on, they’ll undergo the transformation.

Will Killing the Queen Ant Kill the Colony?

Yes, killing the queen ant will kill the colony in most cases. Since the queen is responsible for the reproduction cycle, the colony won’t be able to produce new members, if their queen is dead.

Ants can live for 3-4 months after this happens, but will eventually die. Since there’s no ants to take their place, the entire population will at some point be wiped out.

If you’re looking to get rid of an ant nest or colony, this is a very effective method, though it can be very difficult to kill the queen. She’s protected by the rest of the ants and lives in her chamber deep within the nest.

Why Do Ants Die After the Queen Ant Dies?

When the queen ant dies, the worker ants die either from old age or hunger.

First of all, they can die from old age. This is just like regular colonies, except in this case, there won’t be any newborn wants to take their place, resulting in a decline in the total population. This will eventually lead to all of the ants being dead.

The second way the ants can die, whenever the queen ant dies, is from hunger. Sometimes, worker ants will be too distressed, unfocused, or confused by the death of their ruler, to gather enough food to survive.

If no one’s in charge, then who should they listen to? What should they do? If they don’t figure that out, they’ll die.

Can a Queen Ant Be Replaced?

No, in most cases the queen ant can’t be replaced if she dies, but sometimes she can be. Some ant species have huge fights between the female workers, in order to find out who should be the new queen.

This is unlike bees, who can find a new queen if the current one dies. Here the bees can simply raise a new queen, who will then take flight for mating. After this, they’re good to go.

How Is a New Queen Ant Chosen?

Not a lot of ants do this, but some species get to pick out a new queen if the old one dies. This is done by the females of the colony fighting over the spot as rulers. The female ant, or females, that wins, will then transform into a queen, continuing the reproduction cycle again.

How Do Queen Ants Die?

There are multiple events that can lead to the death of a queen ant. The worker ants can kill her, she can be killed by humans, or she can die because her worker ants die.

The workers kill their queen

Sometimes, worker ants can kill a queen (like Argentine ants [2]). This happens in colonies with multiple queens, as there can sometimes be too many. If this is the case, they’ll kill off some of them.

The problem with this is, they can accidentally go too far. The worker ants can end up killing all of the queens, which will lead to complete colony collapse.

Of course, humans can be responsible for the death of a queen. A lot of people see ants as irritating nuisances. Hence, they want to remove a colony, if it’s nested on their property.

Read more about how to get rid of ants.

The workers all die

A queen ant will die when her colony is wiped out. This can be caused by being physically killed by another insect or animal, environmental conditions that are too harsh for the ants to survive (such as winter), or if the queen’s brood was destroyed in an accident.

This is most often seen when a colony is just starting out. The queen will lay her first batch of eggs. The ants from this first batch (called “nanitics”) have to succeed – otherwise, they will die along with the queen.

How Long Can Ants Survive Without a Queen?

While no ants can survive without a queen, some species of ant colony have been known to live for months or even years after losing their queen. This depends on their ability to gather food without instructions from the queen.

Read more: How long can ants survive without a queen?

How Many Queen Ants Are There in a Colony?

A normal ant colony will have one queen ant. Now, there are such things as supercolonies, which can have hundreds of queens. These will be larger colonies, where multiple small ones have grouped up.

Some species do have more than one queen, even for normal colonies.

The queen ant will for one be larger than worker ants in terms of its size – sometimes even as much as four times bigger. The queen also has a more distinct shape because her only job is to birth to babies.

Also read: How to identify a Queen ant

If you get a chance to look at her back, you might be able to notice a pair of wings – or a place where wings used to be.

Queen ants participate in a nuptial flight. This is where they’ll have a chance at mating with a male ant, and for this they need wings. When the ants have mated, the queen will shred her wings, leaving only a mark of what once was.

How to Get Rid of Queen Ants

If you want to get rid of the queen ant, there are several methods you can try. Though we have to say, it’s not easy to kill a queen. Most of the time, she’ll be very well hidden and protected – but it’s worth a shot.

First of all, you can try out some natural remedies. This is a popular option, as there are some benefits to this:

The most popular natural remedies against ants are:

The most effective way to get rid of ants is, and always will be, calling a professional. If you’ve already tried some different methods without luck, or if you want to make sure to get rid of the ants on the first try, this is your safest bet. An exterminator will know what to do about your problem, and you won’t have to do anything.