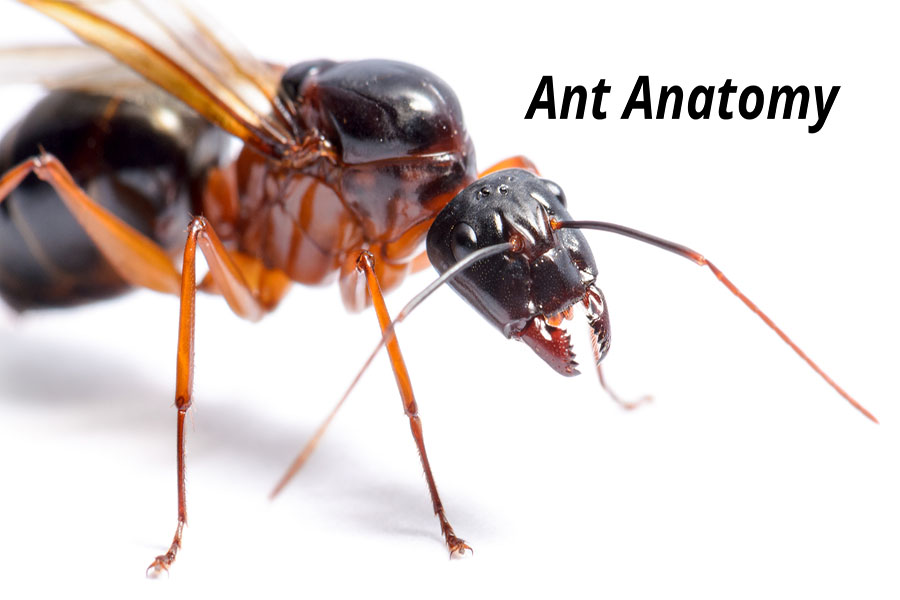 An ant’s body, like other insects, is split into three major parts: the head, the thorax, and the abdomen.

They also have a strong, impermeable (waterproof) exoskeleton composed of a substance known as chitin. And that’s just some of its qualities.

For a lot of reasons, ants are compelling. For their size, they are incredibly strong, for one.

In this article, we’ll talk more about the ant anatomy, how it’s structured, and some of the amazing things they can do because of the way they are built.

Ant Anatomy: What’s Inside an Ant?

Every ant has a head, thorax, and abdomen.

The thorax is defined as: “The part of the body of a mammal between the neck and the abdomen, including the cavity enclosed by the ribs, breastbone, and dorsal vertebrae, and containing the chief organs of circulation and respiration; the chest.”

Ant mouths consist of an exterior lower lip known as a “labium” in addition to three pairs of jaws—the mandibles toward the outside and paired first maxillae below them; this help holds prey while tearing it apart into smaller pieces before passing it onto the teeth crochets inside the ant’s mouth.

The ant’s thorax consists of a prothorax, two wings, and three legs attached to the mesothorax and metathorax.

The ant has six jointed legs with an additional part called a trochanter used as a knee. Tiny hooks connect each foot and toes.

The sensory capital of an ant’s body is its head. Ants have two elbowed antennae towards the front of their heads to smell and touch the environment.

Ants’ antennae are bent in half, unlike those of other insects. Ants excavate, transport, collect food and build nests with their mandibles or jaws.

The ant’s antennae are bent in half, unlike those of other insects. Their antennae can sense chemicals secreted by other ants and help them to identify their own species.

Ant antennae are formed like an elbow and are split into segments. The antenna is the second feature used to differentiate ant species. Begin counting antennal segments with the scape, the longest segment. The last two or three segments can be expanded to form a club. Clubbed antennae are not seen in all ant species.

Ant eyes are small with large pupils like that of a cat’s eye. Compared to the ant size, the ants have incredible eyes. Its compound eyes have around 596 ommatidia [1], which aid it in detecting movement from great distances since they contain so many pixels for an image compared to our human vision.

“Each ommatidium contains six to eight sensory receptors arranged under a cornea and refractile cone and is surrounded by pigment cells, which adjust the intensity of light. Each ommatidium can act as a separate eye and is capable of responding to its own visual field.” – Britannica.

The majority of ants have two huge compound eyes. They have basic eyes of numerous ommatidia (eye facets) ocelli that sense light and shade.

Ants have two antennae that they utilize to identify their nest members and detect threats. They have maxillary palps that detect smells as well.

Ants’ mandibles are powerful, and they use them to break apart food into small pieces for transport back to the ant nest.

Mandibles are not only used to deliver food but are also utilized to prepare food. Carnivorous ants frequently use their mandibles to decapitate or dismember their victim to eat or store it. Their mandibles are also used to rip, pierce, or ground their meal.

Also read: Do ants have teeth?

The ant’s body consists of a cylindrical thorax and abdomen. Ants have six legs attached to the ant’s three sections, known as tagma [2]:

The ant has an exoskeleton made from chitin, which supports its muscles and organs, including wings located on its back.

Ants and Their Exoskeleton

Ants are made up of a three-chambered body with an ant waist. They have exoskeletons that protect their inner organs from harm and support muscles to allow them to run, climb, walk or fly.

Ants have a strong, impermeable exoskeleton composed of a substance known as chitin.

They are compelling for their size: they can lift ten times their own weight. Ants have maxillary palps that detect smells as well [3]. Ants’ strong mandibles are used for grasping and carrying, as well as cutting and biting.

The abdomen houses the ant’s essential organs as well as its reproductive organs. This is also known as the gaster. When threatened, ants in the Formicidae subfamily have an acid pore that emits formic acid.

The Gaster and Stinger

An ant has an acid pore that emits formic acid when it is frightened or agitated; however, ants from different families have various defense mechanisms, including stings (such as bees) and flames (such as army ants).

Ants use these chemical defenses against predators such as spiders and other insects while protecting themselves by utilizing ant bites, stings, or ant spray.

Anatomy of a Queen Ant

Queen ants spend most of their life inside their nests laying eggs, although you could encounter one outdoors during mating season.

They share most of their bodily parts with employees, but they are, on the other hand, are often much larger than laborers. The queen’s reproductive system is housed in her enormous gaster, which is why she needs a larger body.

The queens are born with wings as well, but they are ripped off after mating. To power flight, mesosoma requires more muscles.

When an ant colony is firstborn, a single ant queen takes over its job of laying eggs. She continues to produce offspring until the workers arrive and take over this duty. Most queens live for no more than one year after their mating flight.

The ant queen’s main job is to lay eggs. The number of eggs a queen ant lays depends on the type of ant and varies from species to species, but queens generally produce between two thousand and ten thousand eggs per day.

Queens are also responsible for maintaining their colony by laying more than 50% of all ant larvae in their nest.

Anatomy of a Male Ant

Male ant anatomy is different from female ant anatomy in that they have two sets of wings and a relatively larger head. They also have smaller mandibles than females do, but their legs are longer to accommodate for flying.

You’ll only see a male ant when they’re mating because they die soon after. Males, like queens, have wings and strong mesosoma for flight. On the other hand, Males are generally smaller than queens, with smaller heads, larger eyes, and straighter antennae.

How Long Does an Ant Live?

Queens may live for up to seven years, although the typical lifespan is three years. Worker ants have a considerably shorter life span. The temperature affects their lives; greater temperatures result in shorter lifetimes. In general, fire ant workers have a lifespan of four to six weeks.

How Much Weight Can an Ant Carry?

Does an Ant Have a Heart?

Ants have hearts, but they’re not the same as humans. The heart is a lengthy tube that transports colorless blood from the head to the rest of the body and then back up to the head.

Read the detailed answer: Do ants have hearts?

Do Ants Have Brains?

Ants do have brains, though they are very small. Ants do not have complicated emotions like love, rage, or empathy, yet they approach pleasant things and avoid unpleasant ones. The brain of an ant is basic, with around 250,000 neurons compared to billions in a person. On the other hand, a colony of ants has a collective brain the size of several mammals.

Read the detailed answer: Do ants have brains?

Do Ants Have Eyes?

Ants do have eyes, but not like us – instead, they have 2 compound eyes. They have a basic pair of eyes of many ommatidia (eye facets) ocelli that sense light and shade. Ants also have two antennae, which they utilize to identify nestmates and detect predators.

Do Ants Have Lungs?

Ants are unable to breathe because they lack lungs. An ant’s tiny size prevents them from having the space necessary to handle a complicated respiratory system like ours. Instead, they have developed their own breathing methods to assist in the transportation of oxygen throughout their bodies.

Read the detailed answer: Do ants have lungs?

Do Ants Have Bones

How Much Do Ants Weigh?

The typical weight of an ant varies depending on the species and ranges from 1 to 150 milligrams. The usual weight of our black and red forest ants is between 5-7 milligrams. The lighter ants are well-known domestic parasites of the Pharaoh and some tropical ants, such as the tiny ones and other ants from other parts of the world.

How Tall Are Ants?

Also read: How tall are ants?