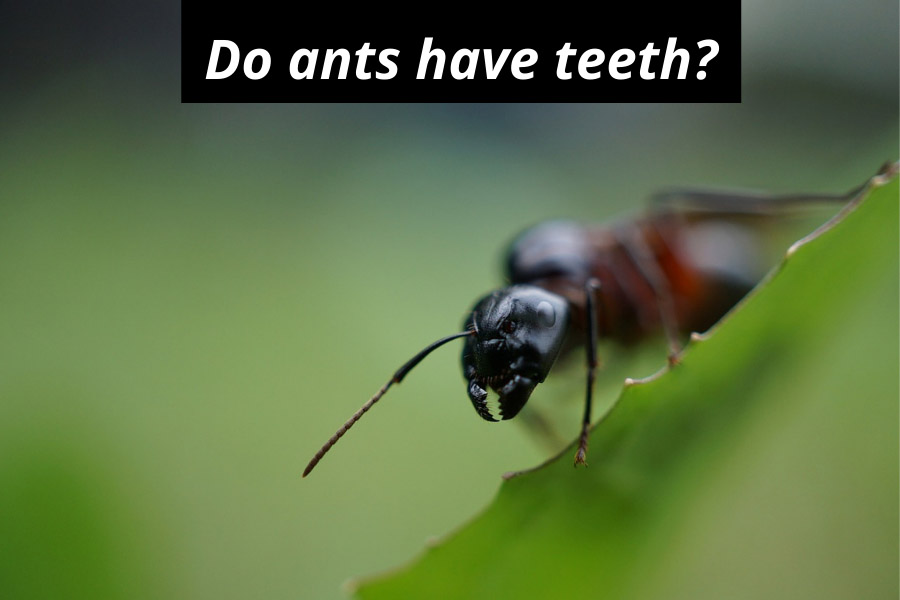 Ants do not have teeth like the ones humans have, but they do possess mandibles, a kind of jaw. The mandible is attached to the head and its function is to capture prey or manipulate food for chewing.

The mandibles are used by ants for many purposes other than eating, such as defense (e.g., biting), carrying objects (e.g., grains of sand), or in some cases even grooming themselves (e.g., removing dirt).

When an ant needs something from another ant it will often grasp them with its mandibles and pull until the desired object comes free.

In this article, we’ll dive deeper into how ants use their mandibles, as well as interesting facts on the topic

Do Ants Have Teeth?

Ants do have teeth, but they’re not internal like ours, but instead placed externally – these are also called mandibles. Different species of ants have evolved different-sized mandibles. Even within the same colony, we see big differences in mandible use, size, and strength [1].

Ants can also use their mandibles to pierce things, which is why ants are often associated with being pests and causing damage by chewing through wires.

Ants use their mandibles for almost everything like building nests, caring for larvae, and hunting prey.

Ants do not chew their food; instead, they use their powerful jaws to grind it up before swallowing.

Read more about ants and their bodies: Ant Anatomy

How Strong Are Ants Mandibles?

A human tooth is only about as hard as aluminum, so it would be easy to break if you chewed on something harder for a long time.

Luckily for ants, they have pretty tough teeth that can handle chewing through food items with high levels of fiber or other materials in them.

Because the size and shape of an ant’s jaw changes depending on what type of food they’re trying to eat, there isn’t just one kind of ant bite when it comes down to how their mouths function.

What Are Ant Teeth Called?

Ant teeth are called mandibles. They do not look like human teeth at all, but they do act in a similar way. If you don’t know what a mandible is, it is the part of an insect’s mouth that looks like a pair of pincers.

There are two sections to them: one being used for chewing and holding food while the other has ridges on both sides which create sharp edges.

Ant teeth are placed externally on the ants’ heads and look like a pair of pincers or scissors, They look nothing like what we usually think teeth look like. Ants don’t cut into food in order to eat it; instead, ants use their mandibles for this purpose.

What Are Ant Mandibles?

Ant mandibles are the ant’s most important tool and are used for almost everything. The ants do not have teeth, but instead, possess this strong set of pincer-like structures that can be moved up and down to cut or crush food items into smaller pieces.

While humans only have two sets of jawbones present in their skulls (the lower set is made up of one bone whereas ants feature three), ants do show evidence of having more than just one pair of these mouthparts as some species do indeed hold several pairs within each head segment.

What Makes Ant Teeth So Sharp?

Ants use their mandibles to pick up food items, care for larvae or pinch down prey. They also use them to cut things, which is why they need to keep them sharp.

Scientists made a study, where they reconstructed an ant’s teeth (mandibles), in order to get a better understanding of how they work. This is where they found a thin coat of heavy metal atoms [2].

Like diamond dust on a blade, the study showed that ant mandibles are covered in a thin layer of zinc atoms. These atoms help sharpen and harden the ant teeth, making them much more effective and durable.

This covering also means that ants only need to apply ⅔ of the force they’d otherwise need if they hadn’t had this covering of Zinc on their mandibles. We see this same pattern with spiders, scorpions, and other insects.

How Do Ants Keep Their Teeth Sharp?

The ant mandibles are covered in heavy metal atoms to make them stronger than they appear – but that’s not the only benefit to the covering. This also helps the ants avoid permanent or temporary blunting of their most important tool, the mandibles.

Now, if the mandibles start to get blunt, the ant might start noticing and take a break, but generally, this doesn’t really happen that much. Due to the incredible strength and durability of their mandibles, they’ll keep working as intended for their lifetime.

Ant teeth do not grow back when broken off though, so ants take extremely good care of them.

How Do Ants Eat?

The ant teeth are used to eat solid food, liquid (through a straw-like form of eating called ‘sucking’), and even squishier foods like honey.

Ants don’t chew their food, but instead, grind it down into smaller pieces with the sharp little nubs that they have on the outside of their head.

How Many Teeth Does An Ant Have?

Ants used to have only 2 teeth, but ants have since grown to evolve, hence it depends on the species nowadays. These don’t grow back, which is why ants take very good care of them.

Ants do not have canines as humans do; their front two bottom incisors are sharp and pointy for cutting into tough foods such as seeds or insects, while the upper pair of jaws are more serrated to grind up food before swallowing.

The mandibles located on either side of the head help ants hold onto prey when they’re digging with all six legs tucked under them (a common habit).

Difference Between Human and Ant Teeth

Ants do not have the same types of teeth as humans do. Ants don’t have as many, and they’re used for almost everything, while ours are only used for chewing/biting.

Ants have what’s called mandibles. These are used for chewing, cutting, caring for larvae, moving objects, and biting. Ant jaws can be described as “flexible” because they do not move side to side as human teeth do vertically up and down instead. This allows them to chew on hard objects with ease.

The shape of an ant’s head is adapted for this type of motion.

Human beings use opposable thumbs in order to hold onto food while we eat but some species of ants use legs or antennae instead. They also tend to situate themselves upside down when eating which only adds more weight making it easier for them to do the actual chewing.

Ant teeth are very sharp and can puncture holes in things like leaves or fruit, and can even bite their way through harder objects such as wood.

Also read: What can ants bite through?