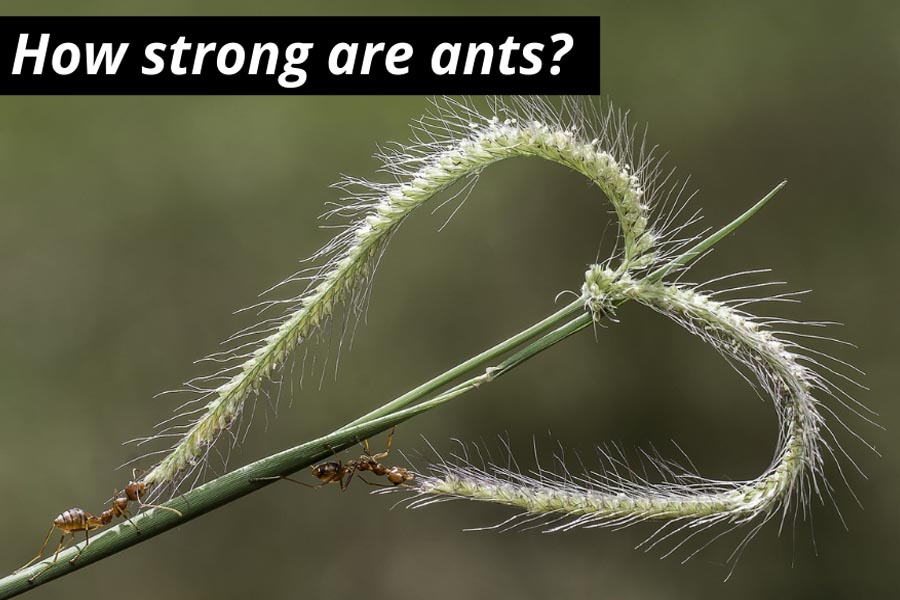 Ants are superhuman in terms of strength. They have incredible strength. They can hold anywhere from 50 to 5.000 times their own bodyweight (the quantity an ant can carry varies according to species).

The necks of ants contain muscles that are several orders of magnitude stronger than those in humans.

Using their strong legs and claws, they cling onto objects with a tensile force equivalent to 5-20 times their weight.

These insects’ strength makes them useful as builders; they create everything from hillsides by moving small grains of sand together one at a time, bridges across gaps where twigs cross, and even rafts to float on the water.

How strong are ants?

Ants are incredibly strong creatures that can carry between 10 to 100 times their own weight over long distances, depending on the species.

This is how they manage to do it:

The muscles of ants are spread throughout their body, not just focused in one place like humans’ are. The incredible neck strength of an ant helps them lift heavy things as well.

While a human can barely hold up something about half its weight for very long, ants have no problem carrying objects many times heavier than themselves for long periods of time!

Their incredible strength does come with some drawbacks though. If you try to pick up an ant by hand, it will likely be crushed beneath your fingers pretty quickly due to how fragile its exoskeleton is, and of course, its small size.

Also read: How much do ants weigh?

In comparison, a strong human can typically lift 2-3 times their own body weight (in a deadlift).

How much can an ant lift?

On average, an ant can lift weight similar to 50 times their own body weight. This is how strong ants are. Ant strength makes them perfect for carrying food and other items back to the colony, as well as helping to build nests through transporting small materials like leaves or sand grains.

Different species also possess different degrees of strength mainly due to the difference in shapes and sizes between the species. Leafcutter ants especially have extremely broad toes with broad shoulders and a large surface area of attachment, which help then lift bigger objects.

How are ants so strong?

Ants, like all insects, have a high ratio of strength to weight. This allows ants and bugs, in general, to be able to lift objects several times their own body weight.

Ants are even stronger than they look because of their mandibles, necks and body structure. If you were to remove the mandibles from an ant, it becomes much weaker as its jaw muscles make up a large portion of its power source.

Another reason ants are so strong is because they have a wider range of muscles than humans do. This enables them to exert themselves for long periods of time without getting tired as quickly, which would be the case with human muscle fibers.

The ant body has smaller muscles that enable more specific tasks like fine movements and bigger muscles that allow stronger, broader motions such as walking or climbing.

Ants also use their strength differently than how we might think about it – instead of using their strength to pull things apart (like how people can lift cars), ants tend to use their power mostly in pushing objects where they want these objects to go.

In a study [1] of how ants compensate for their small size, researchers found that the necks of field ant workers can bear loads at up to 5.000 times their body weight.

An ant’s neck strength is how strong the muscles in an ant’s neck are, specifically how much they can lift or move without hurting themselves.

Researchers did a study of how ant necks work and what limits them by applying force to the ants neck. They increased the workload until the ants simply fell apart. The load went as high as 5.000 times the body weight of an ant.

They also found that when holding very small items, the ants held onto things 100% of the time, even while walking around, instead of dropping them when doing another task.

The strongest ant species is a regular field ant. These have shown to be able to withstand 5.000 times their own weight in workload – though only for a very limited time.

How strong are leafcutter ants?

Leafcutter ants are the strongest animal in proportion to their size. The neck strength of this ant is equivalent to how many times the weight of its own body it can carry, which is about 50x what humans can do! Leafcutters have also been seen carrying pieces that are 200x heavier than themselves by using their jaws and legs together to form a basket shape for transport.

How strong are carpenter ants?

Carpenter ants can lift around 50 times their own weight.

Carpenter ants are known for how strong their jaws and mandibles can be. They use these to break down wood so that it is easier to chew and digest. Their necks also help them carry up to four times as much weight as they would normally be able, which allows them to bring food back home for the colony even if they need assistance from other carpenter ants!

How strong are fire ants?

Fire ants are incredibly strong for their size. They can carry up to 400 times their weight, and cannot be pulled apart by hand (due to how the muscle fibers line up).

Their strength is due in part to how they’re able to lift 50% of their body weight off the ground using ant muscles that do not contain any blood vessels. Ants also have a low metabolic rate which means they need less food than other insects so it makes sense why they’d require such powerful muscles.

How strong are bullet ants?

Bullet ants are one of the most dangerous species, and are typically found in Central and South America. They can grow to be about an inch long, which is fairly large for a type of ant. A bullet ant can typically lift between 10 to 50 times their own body weight.

Bullet ants have extremely strong jaws that they use to eat termites and other insects, as well as defend themselves from predators such as humans or lizards.  Bullet ants can be as long as an inch, and their sting is said to match that of a bullet.

The pain caused by the sting has been described as lasting for 24 hours or more, which makes them one of the most painful stings in the world. It’s possible to die from a single ant’s bite if allergic or having severe health issues already.

How strong are chimera ants?

Chimera ants are one of the strongest species in the world. The average weight for a full-grown adult is just over half an ounce which is about how much 12 paperclips weigh on their own.

Chimera ants can carry up to 100 times their body weight to help with tasks such as moving food back to the colony or dragging leaves off trees so they can eat underneath them.

If humans were able to lift things 100 times heavier than themselves we could easily pick up cars that typically weigh around 2000lbs (or 900kg).

How strong are field ants?

Ants, as a whole, are very strong. Field ants in particular have been found to withstand up to 5.000 times their own body weight, this being decreased to around 50 over long distances.

That means that if an ant weighs one ounce and carried something weighing 3 pounds  (1,35 kg) on its back for ten miles (16 km), it would still be considered light enough to walk away from the task unharmed.

How strong are ants compared to humans?

Ants are much stronger than humans. For example, a carpenter ant can carry over 50 times its own body weight. This means that it could pick up a human who weighs 200 pounds and move them as if they weighed just ten pounds!

Also read: Why are ants so strong?

In fact, ants are 100-1000 times stronger than other insects of their size. They also have incredibly strong jaws which allow them to chew through wood or even rock with ease.

But how do the muscles in an ant’s body compare to our muscles? The necks on ants actually contain very small but super strong muscles which give the colony strength for carrying things around so easily. How does this compare with how we use our necks? We wouldn’t want to see how ants use their necks with ours!

Ants also have a very strong exoskeleton which is built to withstand the weight of things and protect their bodies from predators.

There are even some species that can survive being crushed by a person’s foot without hurting them at all. What would happen if we tried this on humans? Would it kill us or only hurt for a few seconds?

These small creatures seem like they couldn’t do much damage, but as you now know, they’re actually incredibly intricate and powerful animals who show how truly amazing nature really is.

How strong would a human-sized man be?

Human strength is usually measured in how many pounds they can lift for how long. For example, a human can deadlift about one hundred and fifty to two hundred pounds. When it comes to how much weight an ant lifts compared to how strong the ants are, the numbers look very different. Ants have been found able to carry up to ten times their own bodyweight!

One particular type of fire ant has been recorded as being able to support over half its own bodyweight with its jaws. This means that if this fire ant had both his jaws tied together he could still open them enough so that only his head would fit through without dropping anything – pretty incredible!