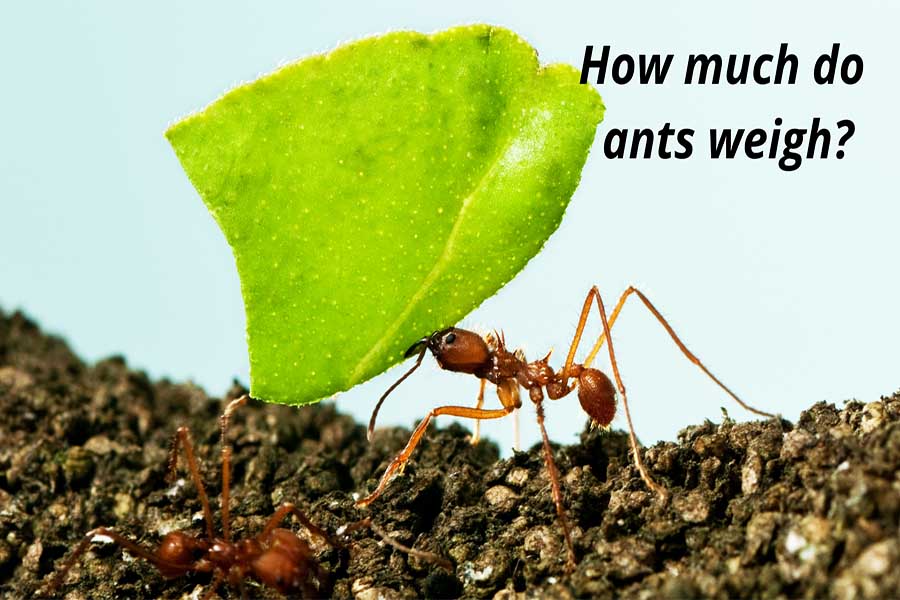 The ant is a tiny insect that weighs between 1 milligram to 150 milligrams.

The ant can be found in the family Ponerinae, order Hymenoptera, class Insecta, and as all other insects, they are quite small.

Ants are social insects and live in large colonies. What they lack in size they make up for in numbers.

How Much Does an Ant Weigh?

An ant can weigh anywhere between 1 milligram to over 150 milligrams, though the most common is between 5 to 10 milligrams.

Ants are tiny insects that vary in weight depending on their size. Ants are the most miniature animals to lift objects many times their body mass, and ants don’t have a problem doing it either.

How Much Does a Queen Ant Weigh?

The ant queen will usually be anywhere from 15 milligrams and 30 milligrams.

The ant queen’s job is to lay eggs and take care of the ant colony. The ant queen will also feed the larvae from her body until they hatch into their worker ants or soldiers. Sometimes ant queens can have a problem with laying eggs because the ant queen will starve herself.

What Are The Biggest and Heaviest Ants?

The biggest ant species in the world is the Dinoponera ant. These have been spotted as large as 3 to 4 centimeters in length. Both the bullet ant and bull ant can also grow to be more than 1 inch in length (2.54 cm).

The ant queen is usually also a giant ant and can weigh anywhere between 50 milligrams to over 150 milligrams, depending on the species of course.

How Many Ants Does It Take To Weigh the Same as a Person?

That’s a lot of ants, but we are sure they would offer some good help around the house.

If you’re wondering about ant eggs, they weigh about 1/30 of an ant. That means it would take 105 million ant eggs to make up the weight of a single human being of 70 kg.

Are All the Ants in the World as Heavy as Humans?

There are ant colonies all over the world that haven’t even been discovered, so there is no real way to answer this question.

How Much Weight Can an Ant Lift?

It is not easy for an ant to carry something heavier than itself, and they are also slower when moving objects this serious due to their size.

Ants have many strengths, such as carrying items over distances without any problems because of their small size, which makes them strong with the minimal effort exerted on their part.

Ants have also been known for lifting objects many times their body mass without any problems at all. Their high strength ratio contributes significantly to their build and provides more than enough reason why ants deserve our respect.

Why Are Ants So Strong?

Ants have evolved with adaptations that make them stronger than most other insects. This is partially due to their incredible exoskeleton and their general anatomy. Ants are dominant compared to a lot of other insects due to their ability to carry objects many times their size and weight without any problems.

Ants also use a high strength ratio to maintain dominance as they search for food or build nests around homes and farms.