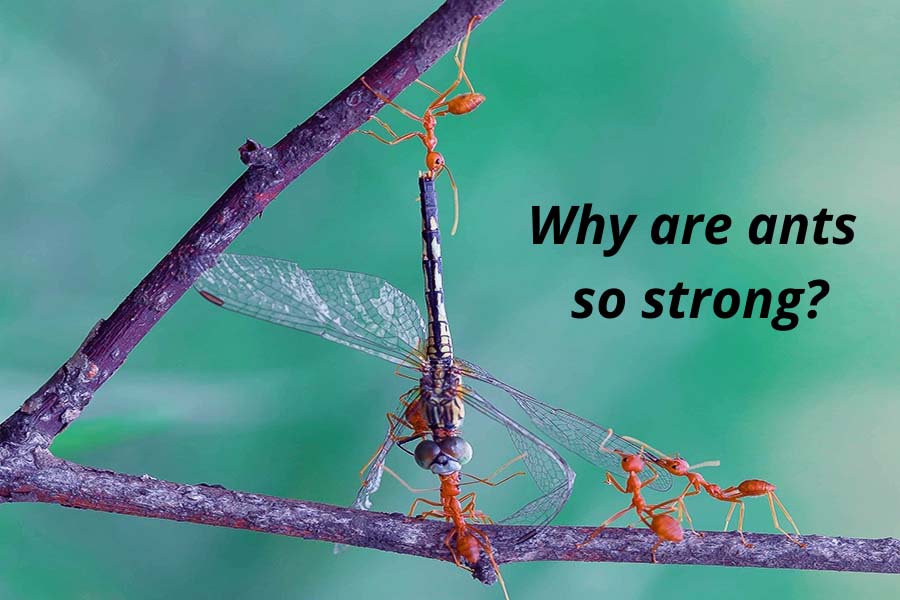 Ants are strong for a few reasons. First of all, ants are very light and have a very strong shape with three sections: head, thorax, and abdomen. Since they weigh so little, their strength is enormous relative to their weight.

They also have an exoskeleton that has multiple layers as well as bumps on the outside. This helps distribute any strain, which enables them to carry more weight without being crushed.

Their muscles are built for power instead of speed or endurance and their small size increases relative strength when compared to larger animals like humans. Ants also work together in groups which gives them greater strength than if they were alone.

Why Are Ants So Strong?

Ants may be small but they are strong. There are a lot of reasons why they’re so strong. They can lift up to 50 times their own weight [1]. This form of superstrength comes from the structure that ants possess, their small size, and their muscles of course.

Their exoskeleton has many layers as well as small “bumps” on the outside. This gives extra support by distributing pressure evenly throughout their body mass.

1. Ants Are Built With a Strong Shape

Ants are built with a strong shape which increases their strength. They have very powerful muscles in order to be able to lift what they do. Many ants, especially army ants, can carry things that weigh more than 20 times the weight of their own body.

Their exoskeleton is composed out of multiple layers (each called an “epicuticle” [2])  and those consist mainly out of chitin – just like our hair and fingernails.

That’s why insects feel so smooth when we touch them but also why it hurts us if we accidentally cut ourselves on one.

Since these parts overlap each other closely there’s no space for water between them. This causes problems during rainstorms because all this wetness starts to interfere with the ability of the exoskeleton to keep water out.

To have super strength, you need strong muscles. The ants’ large mandibles [3] are attached by powerful muscles which allow the ants to bite with a lot of force.

In addition, these strong muscles give them a lot of power when they grasp objects and hold onto things for longer periods of time.

Ants are small, but why is this important? Because the smaller an animal is, the stronger it usually is relative to its size. This is part of why they can lift something 10 times its own weight – because even though it’s a lot more than the ant itself, it’s still not a lot of weight.

Relative to the size of their body parts (for example, an ant’s head), ants have relatively larger muscles than other creatures. These strong muscles give them a huge advantage when it comes to moving things around and lifting heavy objects.

5. Ants Have Strength in Numbers

Ants are very social. They take care of each other and help each other out with building and gathering food. When working together, the ants can achieve incredible things.

How Ants Use Their Strength

Strength wouldn’t be any good if you didn’t use it. Here are some of the things ants do with their strength.

Ants build nests in specific spots. They may be found in trees, under rocks, or logs, but most commonly they are found underground and on the ground.

These nests can be very big, some even stretching for hundreds of miles underground. Without the strength in numbers, the ants would never be able to achieve something like this.

Ants need food, just like any other living thing. But since the ants are so small, they need to be able to lift things much heavier than themselves, to carry them back to the nest.

Since ants can carry things much heavier than themselves, this is no issue. If they didn’t have this ability, gathering food would take much longer, which then would obstruct ants from creating big colonies.

How Strong Are Ants?

While ants might be small, they are extremely strong. Their strength comes from a combination of factors which include their shape and exoskeleton, muscles, weight distribution (and why it is important), and finally the fact that there can be so many in one colony.

Also read: How strong are ants?

Now, when it comes to how much they can carry, it varies from 20 to 50 times their body weight.

The most interesting thing about ants is, that even though they might only be able to carry something 20 times their weight, they can handle much more than that. A study [4] shows that ants can take strain up to 5.000 times their body weight before being crushed.

Are Ants Stronger Than Humans?

Ants are relatively stronger than humans, but not in terms of absolute strength. An ant would never be able to carry 10 kgs like humans easily do.

Ants are incredible creatures, especially when you consider how strong they are for their size. Ants have been known to carry objects 50 times larger than themselves over long distances. For example, one species of ant can lift an object that is 100 times its weight! This means that if a human were the same size as the ants we would easily be able to lift several car cars at once or even small elephants with ease.

How Can Ants Lift So Much?

Ants can lift so much weight because of their strong muscles, multiple layers in their exoskeleton, and the shape of their body.

Their small size also increases relative strength as they can hold more per pound than other larger insects.

In addition, ants have a high level of cooperation with each other which allows them to work together when carrying heavy objects or moving large pieces of food back home.