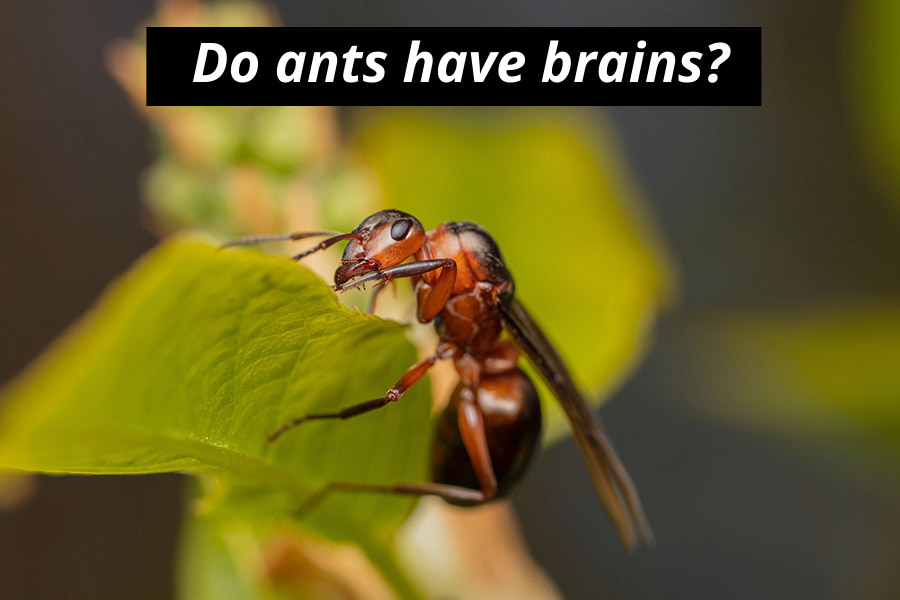 Ants, like humans, have brains, although tiny ones. There are only about 250,000 neurons in an ant’s brain.

But even though their brains are small, they’re still hardworking.

Ants can communicate, avoid and fight enemies, search for food, display courtship signals, and use complex navigation over long distances, regardless of the size of their brain.

Learn more about how the ant brain works in this article.

Do Ants Have Brains?

Ants do have brains, although they are rather modest in size. The ant brain contains 250,000 neurons [1]. Despite their tiny six-legged bodies that may not compare to the size of our own brains with 100 billion neurons and 1000 trillion synapses (connections between cells ), ants’ small minds manage to function on an incredible level of intelligence for invertebrates.

Even though humans are far more intelligent than any ant could ever be, one can’t help but admire how hard these little insects work.

For example, did you know that ants can do things like communicate with each other?

Ants can also avoid enemies and fight them off when necessary. When they search for food, it’s quite impressive to watch how complex their navigation skills are. They use visual cues to help guide themselves around obstacles or toward the direction of a tasty treat.

How Big Are Ant Brains?

Ant brains contain about 250.000 neurons – 344.000 times less than humans (we have around 86 billion neurons). The smallest part of an insect’s brain is called a ganglion which contains about 100 neurons or nerve cells and can be found in insects like flies and bees.

Another part of the bee’s brain, for example, is called the cerebral ganglion, which has about 20.000-25.000 neurons located towards the front region near its eyes.

Other sections include dorsal thoracic (which controls movement) with just 50-100 neurons, supraesophageal commissure having 5000-6000 neurons, and suboesophageal ganglion with about 80-90 thousand cells.

An ant brain is tiny and ants don’t have a big neural network as humans do. They are more limited in their capabilities which makes them less intelligent than most other insects.

But still, ants can learn by observation and execute what they’ve learned with little trouble so long as they follow certain rules.

For example, if you drop food near an anthill or on top of it where some workers can easily find it, but others probably won’t be able to reach it unless they’re willing to go out further from the nest, this new knowledge could help those who travel farther away from the colony find food earlier on.

Similarities Between the Ant Brain and Human Brain

The ant brain and human brain do have similarities. They both consist of neurons, which are nerve cells that use electricity to communicate with each other.

The way they do this is by sending chemical messages from one neuron across a gap to another. At the end of each neuron, there’s what’s called an axon terminal or synapse.

When a message reaches the end, it triggers the release of chemicals known as neurotransmitters into the gap between two neurons that causes transmission over electrical impulses through these gaps, which make up neural pathways in our brains similar to ants.

This is because when we learn something new, our experiences rewire our brains by strengthening some connections while others weaken depending on how often things happen together – much the same way ants do too.

Hence, both our brains and ant brains have similar memory systems.

Differences Between the Ant Brain and Human Brain

To body mass, humans have larger brains than ants do which means that we are more intelligent and capable than them. However, this does not necessarily mean that ants do not possess intelligence.

They exhibit social complexity and learning behavior similar to other animals, including vertebrates such as monkeys or crows. Even though their tiny little heads cannot compete with those belonging to primates or mammals, which can be up to 80-fold heavier than insects and ants, it should be noted.

How Intelligent Are Ants?

Ants do have brains. In fact, their brains are very much like human brains in the way they function and process information.

However, ant brain size is a lot smaller than humans, so it’s difficult to say how intelligent ants really are when compared with people.

Furthermore, just because something has a brain does not mean that it can think or understand things in the same depth as an animal that spends its entire life honing various skills such as hunting for food and caring for offspring.

These types of animals would be considered more intelligent by most standards since they possess abilities to do complex tasks which require higher-level thought processes whereas ants don’t appear to do anything all that complicated other than carrying out one task at a time (carrying food, laying eggs, etc.).

Many people do not question the intelligence of ants. Ants seem to do a lot with their tiny little brains and we tend to think that they are very intelligent because of this.

However, there is no one ant brain; rather every ant has its own individual mind and thought process (similar to humans).

They do work together as a unit in order to accomplish tasks such as moving debris or finding food for the colony, which leads many people to believe that they have hive minds [3] as bees do; however, science tells us otherwise.

Do Ants Have Feelings?

The ant brain is responsible for controlling the body’s basic functions. It has about 250,000 neurons, compared to 100 billion in humans.

Ant brains do not have a cerebellum or cerebral cortex which are important parts of human and other vertebrate brains.

This means that ants do not have feelings or higher cognitive thinking abilities like humans do through memory, creativity, reasoning, etc.