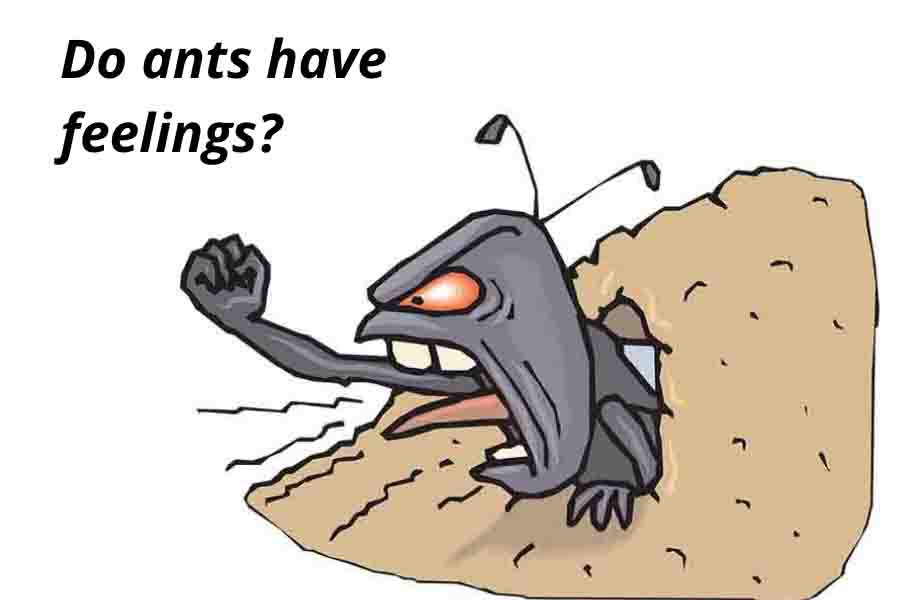 Ants do not have complex emotions.

They do, however, enjoy some things and dislike others.

Ants do feel pain, but they do not process it the same way human beings do because ants lack a neocortex.

In this article, we’ll explore whether or not ants have feelings, and which ones they might be able to feel.

Do ants have feelings and emotions?

Ants do not have the type of brain that would allow them to feel complex emotions [1]. However, they do find some things pleasant and others unpleasant.

For example, ants will be attracted to sweet foods such as honey or fruit but avoid anything containing caffeine like coffee or soda because it is bitter and therefore bad for them.

They also prefer warm temperatures to cold ones.

Ants do not feel pain the same way human beings do either. They can’t process sensations like we do since ants lack a neocortex.

Ants do not have as complex brains as we do, so they don’t actually “feel” anything the way humans do. Their brains do process sensations, however. For example, when an ant finds something sweet and delicious to eat, its brain will release dopamine which is the neurotransmitter that helps control feelings of pleasure in us as well.

Read more about ant intelligence in our article: Do ants have brains?

Ants are attracted to things they find pleasant

As said, ants find some things pleasant, which isn’t the same as having feelings or emotions, but it is a step towards this type of advanced thinking.

If ants find something pleasant to eat, they will communicate this to other ants. This is typically done by spreading pheromones to create a trail, leading to the delicious treat they’ve found.

This knowledge can help you create ant bait, using something like sugar or syrup to lure ants into your trap (if you’re trying to get rid of ants in your home).

Ants do not like substances that have a strong smell or taste and will stay away from them.

This can be a number of things. Ants don’t like things that are bitter for example, which causes them to stay away from coffee. This is why coffee is typically endorsed as an ant repellant.

The ant brain and how it processes sensations

Ants do not have human emotions, but they do process sensations and make decisions based on them [2]. The ant brain is very tiny compared to its large body size. It only makes up one-millionth of the total weight of an ant’s body. This means that it must be very, very efficient.

Even though ants do not have feelings in the way humans do, they do experience things like pleasure and pain through their nervous systems.

Most of what an ant experience is processed below its brain in circuits that connect to nerve cells called neurons. The neurons do two things:

When you touch a hot stove or injure yourself in some way, the pain signals travel through your body via electrical impulses that are triggered by chemical messengers called neurotransmitters.

Ants also have neurotransmitters like dopamine, serotonin, and octopamine. Octopamine is involved in aggressive behavior towards other ants, while serotonin seems to be important for ant communication.

Ants do feel pain, but it’s not like the kind of pain that humans experience. By this, we mean that ants do feel physical pain, but not emotional pain.

One big reason for this is that ants do not have brains that are complex enough to process sensations in a very detailed way. The brain of an ant is tiny. It does contain some structures which do respond to painful stimuli in much the same way as human brains do.

Scientists have observed this in an experiment where ants were hurt by being given small electric shocks or pinched with forceps. The ant brains showed the same response to these stimuli as human brains do, which is likely pain-related.

One study looked at how injured ants behave and found that they tend to become less active, slow down their movements, and do not respond to other ants in the same way that healthy ants do [3]. This shows us that they do experience pain, but it is different from what humans feel because their brains are so much simpler than ours.

Outside sensors on the exoskeleton

As stated, ants do not feel pain as we do because their brains are simple and they don’t process sensations in exactly the same way that mammals do.

Ants sense things like light, temperature, wind speed, and direction, humidity levels, pheromones coming off other insects, etc. They do this with their smell, antennas, and the general feeling from their exoskeleton.

This means they can feel simple sensations. For example, the sun feels nice on their skin; water feels good when drinking; smelling food makes them hungry, and so on.

This also lets them feel some pain when they’re injured. As with all other animals, they have some sort of mechanism in their body, telling them to run from danger if they’re hurt.

Do ants have intelligence?

Ants do have a complex social structure and they communicate with each other, but it is unlikely that ants think in the same way humans do.

The human brain has approximately 86 billion neurons whereas an ant’s brain only contains about 250.000. That means there are only about 344,000 times more neurons available for processing information in a typical human brain than there are in an ant brain.

While it is true that ants don’t have a lot of neurons available, the size of their brains isn’t proportionate to their intelligence or memory capacity. In fact, this idea has been supported by recent research. It turns out that animals with larger bodies and smaller brains actually tend to be more proportionately intelligent [4].

Since ants work together in a very complex way, they’re able to achieve incredible things, even though they don’t have the biggest brains.