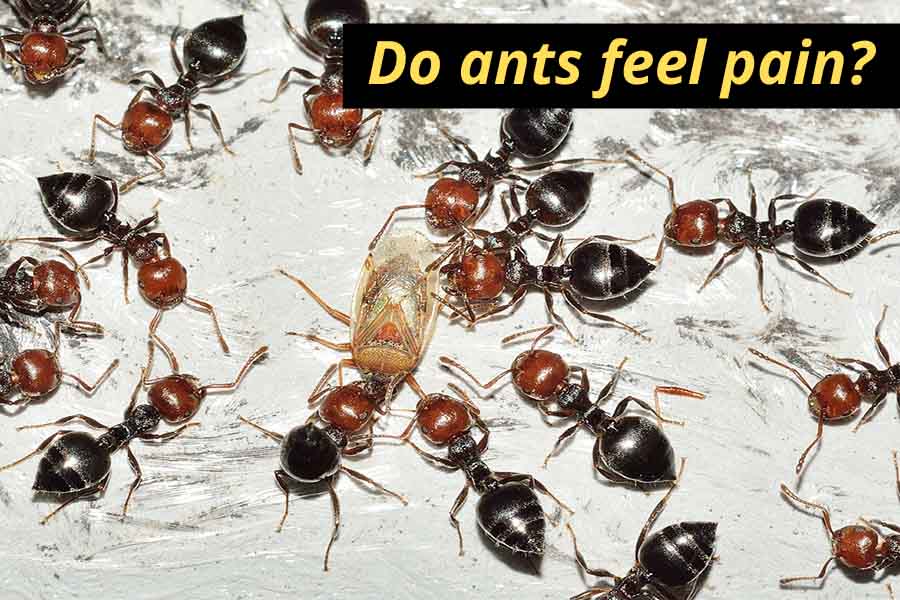 Insects like ants, according to entomologists, do not have pain receptors like vertebrates. They don’t feel ‘pain,’ although they may feel discomfort and may probably tell if they’re injured.

Nonetheless, they cannot suffer emotionally since they lack feelings.

Ants do not have complicated emotions like love, rage, or empathy, yet they approach pleasant things and avoid unpleasant ones. They can follow trails, find food, and recognize their colony by using their antennae to smell.

Ants do not feel ‘pain’ as we do. However, they have simple feelings such as fear and happiness that are triggered by chemicals released when they’re attacked or killed.

Ants respond to certain stimuli like heat, cold, pressure changes, and chemical irritants with behaviors related to avoidance of the stimulus- similar to what we do when something hurts us.

They do not experience ‘pain’ but may experience discomfort and presumably sense when injured.

Ants do not have a brain like humans to interpret pain signals. However, they possess tiny brains and nerve cords with ganglia that help them process sensory information on their surroundings and internal states.

When attacked by predators or stung by insects, some ants can be pricked without feeling distress. This has led scientists to conclude that the insects may sense no more than discomfort from injuries while reacting in ways similar to human behavior if hurt severely enough.

The Science Behind Pain

Individuals experience pain when particular nerves called nociceptors [1] detect tissue damage and communicate information about it to the brain via the spinal cord. For instance, touching a heated surface sends a message to the spinal cord through a reflex arc, resulting in a rapid contraction of the muscles.

Ants react with alarm when injured and try to escape from the source of injury while displaying erratic behavior like flailing their legs or antennae.

This can be explained by what scientists call nociceptors which serve as insects’ primary sensors for detecting harmful stimuli in their environment.

These are similar to photoreceptors found on human nerve endings, except that ants possess an abundance of them all over their body, such as at the joints and mouthparts, where it is easy for them to detect noxious sensations caused by injuries received during conflict themselves or against enemies.

Do Ants Have Pain Receptors?

They may experience discomfort but cannot suffer from pain. Ants possess tiny brains and nerve cords with ganglia [2] which help them process sensory information on their surroundings and internal states.

Ants have an exoskeleton, meaning their skeleton is outside their bodies instead of inside like ours. They can sense pain but do not feel it as acutely as humans do because they do not have a central nervous system that tells them where and how badly the body is injured.

Do Ants Have a Nervous System?

Insects do not possess a centralized nervous system like humans. The ant nervous system instead runs from top to bottom [3], a bit like the human spinal cord.

Nociceptors are distributed in the body and connected to ganglia. This is where pain signals are processed before they travel up to the brain through nerve fibers.

Humans have a highly advanced nervous system consisting of a brain and spinal cord for processing information about sensations we feel while having specialized organs such as eyes, ears, nose, etc. Each is dedicated to its function, like detecting light waves or chemical particles in the air.

Insects do not have this very complex system though they receive and process sensory information about their environment.

Insects do not even possess a central nervous system like humans. Many of them do not have very evolved brains or highly-developed ganglia for processing internal states such as pain or pleasure sensations from the organs present in their body. The lack of a centralized brain also means no governing center to coordinate activities between different parts of its anatomy, which work independently yet respond collectively when needed.

Insects do not have the brains to process emotions as humans do. However, they possess ganglia, where they receive and store information about their surroundings and internal states.

This is the reason why ants respond collectively when hurt or under attack by predators; it’s also possible that the insects may only sense discomfort from

Also read: Do ants have feelings?

Ants don’t have complicated emotions. Yet, they do approach pleasant things and avoid unpleasant ones. With their antennas, they can track pathways, identify food, and recognize their colony.

Do All Insects Feel Pain?

Insects lack receptors for pain. Yet, researchers discovered over 15 years ago that insects, particularly fruit flies, have a sensation similar to acute pain called “nociception.” When exposed to severe heat, cold, or physically damaging stimuli, they react in the same way people do when in pain.

Flies do not have the correct type of neurons to feel pain. Both flies and ants are arthropods, which means they do not possess a centralized nervous system; instead, many nerves that control different parts of their body communicate with each other for them to move as needed. This is a more efficient way for insects because it allows them to do more things at once.

Roaches do not feel pain. To say that insects do or do not feel anything is misleading because they do not have the same neurotransmitters and neurons as humans to process emotions, feelings, and sensations such as pain. But insects can respond in specific ways when exposed to harmful stimuli, similar to what humans experience when they do not feel well.

No one can be sure if wasps do or do not feel pain because scientists have yet to prove that they do. However, insects generally possess nociceptors and respond to noxious stimuli like pressing a boiling hot metal plate against their body by lifting their legs off, even though this damages them.

Insects do not possess the same sensory organs as humans, so they react similarly to stimuli. Even if insects do have nociceptors, their pain response may have little resemblance or connection to the human sensation of pain. However, insects do respond to stimuli that are harmful by lifting their limbs off of them.

Ants do not have brains, just simple nervous systems spread throughout their body instead of in one place like we do.

They do possess neurons, so there is some feeling going on with their brains. Insects do not have complex or well-organized pain processing centers in their brains, which means they do not feel the same kind of ‘pain’ as we do because it’s an entirely different sensory experience.