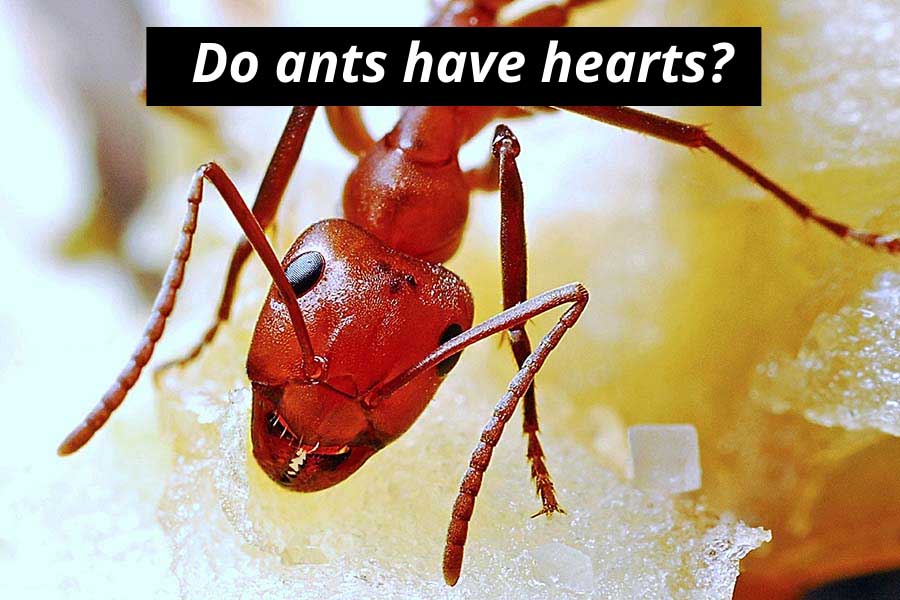 Yes, ants have hearts, just different from the ones we see in humans.

Ants are interesting creatures. They can be found in a variety of environments, from the desert to your kitchen floor, and they live all over the world.

Most people believe that, because ants don’t have blood vessels as humans do, they must not have a heart either – but this is incorrect.

In fact, an ant dorsal vessel is actually quite similar to a human heart in many ways. Let’s take a closer look at exactly what it does and how it works.

This is how an ant’s cells are constantly fed with fresh, oxygenated blood. The dorsal vessel has contractile movements that push the hemolymph along with its network of vessels, which branch out throughout the entire body.

The dorsal vessel [2] is a long, tube-like structure that runs along the dorsal side of an ant. In other words, it’s located on top of their body as opposed to underneath or inside it. The dorsal vessel connects directly with two large chambers called the prothoracic and metathoracic segments – pretty strange words for a unique and important organ.

These two chambers, which are filled with fluid called hemolymph (similar to the blood found in humans), connect at their dorsal side too. This is where the dorsal vessel meets these segments.

At its endpoints, the dorsal vessel splits into three different branches that extend outwards from it like leaves on a  branch. These three branches are called dorsal aortae, and they’re what carry the hemolymph throughout the ant body to nourish cells, tissues, muscles, etc.

How Does the Dorsal Vessel Work?

The dorsal vessel in ants works pretty much as a human heart does, but does have some major differences.

The dorsal vessel is responsible for pumping hemolymph throughout the ant’s body (blood vessels carry blood to and from different cells). It also supplies dorsal aortae with fresh fluid when they need it by flowing into them through openings called Ostia [3].

This dorsal vessel is also important because it contains a nerve cord that runs through the center of it. The dorsal vessel, like many other organs in an ant’s body, requires its nervous system to direct and regulate how it operates – which means the dorsal vessel must be connected with this nerve cord.

The dorsal vessel of an ant can be found on the dorsal side, or top, of its body. It’s made up of a long tube with chambers at each end called metathoracic and prothoracic segments. These two chambers are filled with hemolymph [4] (which is similar to blood), while dorsal aortae carry the fluid from one end of the dorsal vessel to another.

Although dorsal vessels are similar in nature to a human heart, there are some major differences between them – most notably their size and location.

Dorsal vessels tend to be much smaller than our hearts because ants have smaller bodies than humans, and they’re also located on the dorsal side of ants as opposed to inside them.

The dorsal vessel is located on the dorsal side of ants, which means it’s above their bodies rather than below them or inside. It can be found connecting two segments called prothoracic and metathoracic that are filled with hemolymph (similar to blood).

In ants, just as in humans, the dorsal vessels function to transport blood throughout their bodies. When required, they also help supply other organs and muscles with fresh hemolymph by means of Ostia.

Do Ants Have Blood?

Ant dorsal vessels are very similar to human hearts and function in a way that’s quite similar, but they don’t contain blood like human veins. Ant dorsal vessel contains a fluid called hemolymph (similar to the blood found in humans). It pumps this fluid throughout ants using three different branches – dorsal aortae – which carry it to different parts of the ant body.

The dorsal vessel also contains a nerve cord that runs through its center, which is important for directing and regulating how it operates.

Ant dorsal vessels are similar to human hearts in many ways, but there are some major differences too. The most important of these is their size – dorsal vessels tend to be much smaller than our own hearts. They also have different locations on the body as well – dorsal aortae can be found connecting two segments called prothoracic and metathoracic that are filled with hemolymph (similar to blood).

Ant dorsal vessels are quite similar to human hearts and function in a way that’s also very much alike, but they don’t contain blood as we do. Dorsal aortae transport the fluid called hemolymph (similar to human blood) via three branches, which pump it throughout the ant body.

Dorsal vessels are located on the dorsal side, or top, of ants’ bodies which means they’re above their abdomens rather than below them or inside their torsos.  The ant’s dorsal vessels are made up of a single tube that contains chambers with openings known as Ostia. These dorsal aortae transport the hemolymph through the ant’s body to various cells, tissues, and muscles.

Ant dorsal vessels are quite similar to our hearts and work in very similar ways, although they do not carry blood as humans do. Dorsal aortae transmit hemolymph (similar to human blood) through three branches that pump it throughout the ant body. The dorsal vessel is found on the dorsal side of ants, which implies it is above the abdomen rather than below or inside the body.

How many hearts do ants have?

Ants have one heart, but this is not a normal heart. Instead, ants have what’s called a dorsal vessel or dorsal aorta, a big pump running through their body like a tube.