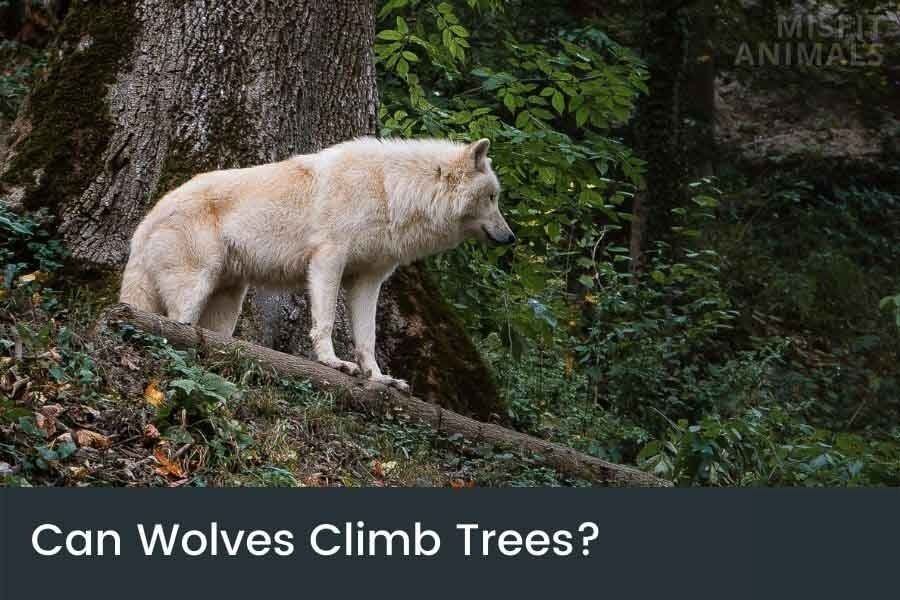 No, wolves can’t climb trees. However, they can reach lower branches by standing on their hind legs or jumping up. They do this to catch prey.

When hunting birds, or other prey hiding in trees, they may try and reach them. But they can’t climb tree trunks, so how do they do it?

And when exactly do they climb trees?

In this article, we’ll talk about how wolves may climb trees, and why they do so.

While wolves can’t climb trees, they can reach lower-hanging branches. They do so by standing on their hind legs.

Wolves can’t climb trees, as they can’t grip onto the trunks. This inhibits them from chasing prey in tall trees.

They are able to reach lower branches by standing on their hind legs, and they can also jump to reach branches that are a bit higher up.

If wolves do this, it’s because there’s something they want in the tree, typically prey animals. Sometimes, they may also do so to reach fruits and berries that are located higher up than they can reach when on all four legs.

If you’re ever chased, or attacked, by a wolf (which is highly unlikely), you can climb into a tall tree. Wolves won’t be able to follow you.

Why Do Wolves Not Climb?

There are several reasons why wolves can’t climb. Their paws weren’t developed for climbing, and the same goes for their claws.

Animals that can climb trees have evolved to do exactly that over the duration of many years. Wolves aren’t one of these animals.

There are generally three reasons why they can’t climb trees:

Wolves haven’t developed climbing abilities, as they typically feed on animals that live on ground levels, such as ungulates, rabbits, and rodents. They are very good at running and chasing prey.

In the wild, wolves live in open areas where there are few trees. When they do live near forests or woodlands, they tend to stay close to the ground where it is easier for them to hunt prey.

Wolves do not have the same kind of paws as other animals do, which is why they cannot climb trees.

Their paws do not meet certain requirements to be able to traverse up a tree trunk. They don’t have opposable thumbs or retractable claws, which is needed. Instead, their paws are flatter and wider than those seen in climbing animals.

Wolves are slender, and they have long limbs. Their physique is much better suited for running fast and traveling long distances.

Wolves do not have retractable claws as cats do. This means that they cannot climb trees with large trunks.

Retractable claws allow an animal to grip onto the bark and quickly release again for a fast ascent. This is also combined with very high acceleration.

Instead of retractable claws, wolves always have their claws out. They’re very big and sharp and are used primarily for hunting prey.

Where & When Do Wolves Climb?

Wolves will reach into trees if they’re looking for food, either fruits or prey.

Wolves eat a lot of meat every day. They need about 2.5 pounds to survive, and 5 to 7 pounds to be able to reproduce. Hence, they’ll do whatever they can to reach a meal.

This includes trying to scale a tree.

Wolves may try and chase a bird, squirrel, or similar animals into trees. If these animals live on the lower branches, a wolf may just have a chance at reaching them.

How Do Wolves Catch Prey in Trees?

Wolves can reach the lower branches of trees, either by jumping or standing on their hind legs. This is how they may reach prey in trees.

Wolves are known for their hunting skills, and many people assume that they can climb trees to catch prey.

Unfortunately for wolves, they can’t climb, which makes it more difficult to reach prey that resides in trees.

Instead of climbing, they’ll reach as far up as possible by standing on their hind legs or jumping up into the trees. If their prey lives on the lower branches, they’ll typically be able to reach them.

Wolves will use their mouth to bite onto the prey, pulling them out of the prey. Wolves have a strong bite, which can snap the neck of smaller prey instantly.

However, wolves are aware that they can’t climb, and won’t spend time looking for prey in trees. Instead, they focus on whatever prey they can reach on ground level. Very few animals can outrun a wolf.

How High Can Wolves Jump?

Wolves are known for their high level of athleticism. They’re fast, agile, and athletic, but how does that transfer into their jumping ability?

This is useful when they need to pounce on prey, especially the ones bigger than themselves. They’ll jump onto moose or elk, biting their shoulders and flanks.

This power primarily comes from their hind legs, which are incredibly strong.

How to Avoid Wolf Attack by Climbing a Tree

Wolves rarely attack humans, but if such an event would happen to you, you can climb into a tall tree to escape.

Wolves are known to be predators, and as such, they can be dangerous. One way to avoid an attack by a wolf is to climb a tree.

Wolves cannot climb trees, but they can reach lower branches by standing on their hind legs. Hence, you should make sure that you climb into a tall tree.

These predators are patient animals, and often chase their prey over several miles. Hence, you may have to wait a long time for the wolf to go away.

Wolves do not have the physical abilities to climb trees. They cannot grip large trunks or branches and they simply weigh too much as well. Their bodies are built for running, not for climbing. This also includes their paws, which are too wide, and the fact that they don’t have retractable claws.

If they’re trying to reach into a tree, they may jump or stand on their hind legs. Wolves can jump about 9 to 12 feet into the air, allowing them to reach lower branches of tall trees.

As wolves can’t climb, you can avoid a wolf attack by climbing into tall trees. Just make sure it’s tall enough.